PHOTO: We're Not Sure What's Going On With Bryce Harper's Hair Anymore

Share All sharing options for: PHOTO: We're Not Sure What's Going On With Bryce Harper's Hair Anymore

We haven't heard much from Bryce Harper since the Nationals sent him to AAA Syracuse from spring training. That might be because Harper's hair is doing all the talking for him.

The Nationals' super-prospect is batting .364 with a .417 on-base percentage and an .872 OPS after his first three games with the Chiefs. But somehow, we doubt that's what people will be talking about after they look below the jump. 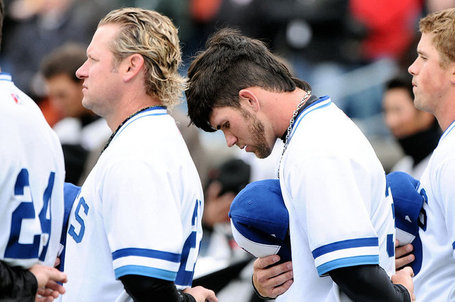 Look, we're not ones to throw stones when it comes to hairstyles. We've always preferred shaggy locks to buzzcuts ourselves, and we're pretty sure Bubba Watson stole our latest cut for Sunday's green jacket presentation.

Lobshots suggests naming this cut the Davy Crockett, which is a good idea, but one which we suggest gives Harper a bit too much credit. After all, the frontiersman couldn't help but look ridiculous in his coonskin, while Harper actually had to take a look at himself in the mirror (we assume) and say "Yeah, that looks good."