After hitting their peak on Saturday, tickets to see Bryce Harper's home debut have dropped considerably, according to TiqIQ's data.

With the home average so high this season thanks to some marquee interleague matchups, this game sits well below that average. At the current price of $31 per seat, tonight's game is 69 percent below that Nats 2012 average. As the graphic below illustrates, the average ticket prices for the game have dropped considerably since they peaked around $45 on Saturday.

There are 470 seats still remaining for the game, including many great deals for, including 48 seats for $10 or less, all in the TiqZone infield box. All of these seats are at least 84 percent below Face Value.

There are also an additional 90-plus seats available for $10-$20. Tickets for tonight are also 65 percent below Stephen Strasburg's debut against the Pirates in 2010 which had an average ticket price of $87. 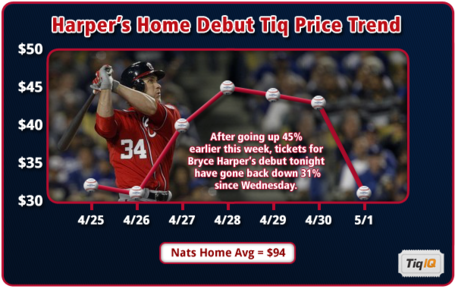