Bryce Harper Injury: Nats Outfielder Gets 10 Stitches After Accidentally Hitting Himself With Bat

Share All sharing options for: Bryce Harper Injury: Nats Outfielder Gets 10 Stitches After Accidentally Hitting Himself With Bat

Washington Nationals superstar rookie Bryce Harper is often described as playing the game at full-speed with top-notch intensity at all times. On Friday night, he injured himself during a game in Cincinnati when he took out his frustrations in the clubhouse. While the Nationals' offense broke out against the Reds, the leftfielder was 0 for 5 at the plate and apparently slammed a bat into a wall in anger. The bat promptly retaliated by ricocheting off the wall and catching him in the head. Via Amanda Comak of The Washington Times:

Harper took his frustrations out on the wall, w a bat. Davey said the bat came back & hit him. May need a stitch or 2, may be out few days

The resulting gash apparently required 10 stitches, perhaps putting him in jeopardy for Saturday night's game against the Reds. But the 19 year-old phenom told Adam Kilgore that he will be ready to play:

Bryce Harper had a golf ball-sized lump over his eye, clumps of blood in his hair. 10 stitches. "I'm fine," he said. Wants to play tomorrow.

Here's a pic of the damage, caught by @bstouttt: 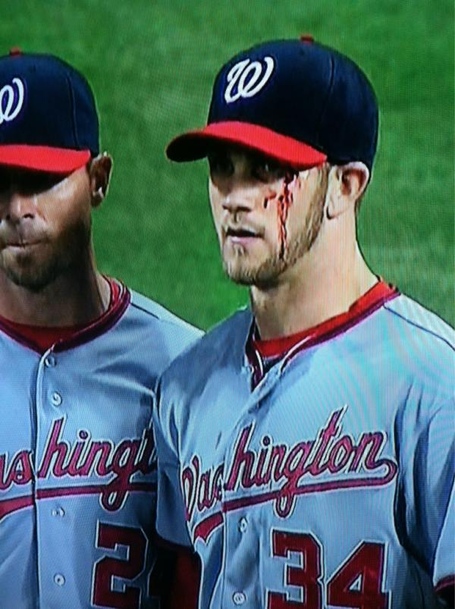