Diamondbacks Vs. Nationals: Bryce Harper Called Out On Appeal Play In 1st Inning

Share All sharing options for: Diamondbacks Vs. Nationals: Bryce Harper Called Out On Appeal Play In 1st Inning

Bryce Harper's first plate appearance as the third hitter in the Nationals order ended in controversy after he was called out on an appeal play to first base after reaching on an error in the bottom of the first inning.

With two outs and the bases empty, Harper grounded a comebacker to Diamondbacks starting pitcher Ian Kennedy, who made a wild throw to first base. Harper advanced to second on the play, but the Diamondbacks appealed to first, believing that Harper had missed the bag. First base umpire Chris Guccione agreed, and Harper was officially called out, 3-unassisted.

Video of the play can be found here, and some screengrabs make it appear to be a very close call. 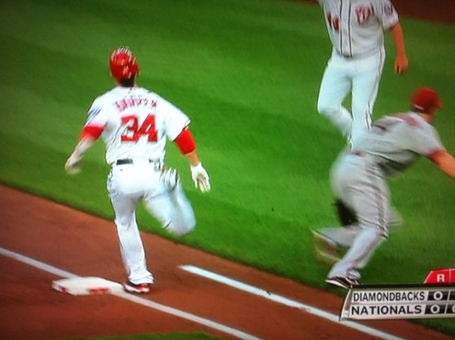 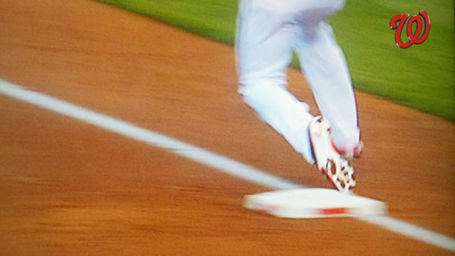 First screengrab via @recordsANDradio; second via @ChrisMottram. Decide for yourselves: safe or out?

We'll have plenty more on this series throughout the week on SB Nation D.C., so keep it locked to this StoryStream for all the latest news and updates. For more on Harper's debut, and all things Washington Nationals baseball, please head over to Federal Baseball. You can also check out AZ Snakepit, SB Nation's Arizona Diamondbacks blog, for some perspective from the other dugout. Please head over to the SB Nation MLB hub page for more on this and every Major League Baseball game and series.