The Potomac Nationals, the high Class-A affiliate of the Washington Nationals, have been playing at G. Richard Pfitzner Stadium since the team moved to Woodbridge in 1984. Plans for a new stadium have been floating around for almost a decade, but it appears that now, concrete plans for a new stadium are here. What's even better is that the team will not be leaving the city they have called home for almost 30 years.

The stadium will be located at Potomac Town Center, which has easy access from both Route 1 and I-95. With the wide array of quality shopping, office and residential opportunities, this will be a unique setting not found at many minor-league stadiums in this country.

An artist's rendering of the new stadium will be available after the jump. 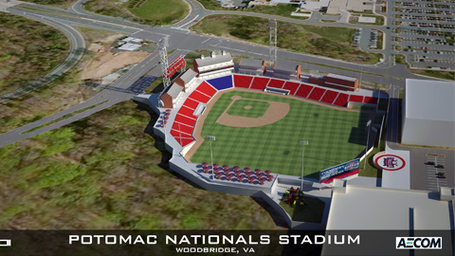 The Potomac Town Center is about 10 minutes away from where Potomac Mills is and about 20 minutes away from Pfitzner Stadium. Having viewed many games at Pfitzner Stadium, the need for a new stadium is apparent, especially since a recent fire damaged the business offices at the stadium. The new stadium's location near I-95 should give better access to fans that want to go see the Nationals of the future.