PHOTO: Phillies Fans With Horse Heads At Nats Park; Have We Seen Them Before?

Share All sharing options for: PHOTO: Phillies Fans With Horse Heads At Nats Park; Have We Seen Them Before?

We first saw what you're about to see below the jump during Wednesday night's Nationals-Phillies game. It initially filled us with shock, horror, confusion, revulsion, Godfather references, you name it.

But then we started to go back through our memory archives and we suddenly realized something: We think we've seen these guys (yes, plural, MASN got a shot of both of them in their end-of-game montage Tuesday night) before.

However, we could be wrong. Lord knows we have been wrong before, for one thing, and a quick Google search has turned up a disturbingly active horse mask subculture at baseball games over the last couple of years.

I mean, what the hell?

I mean, far be it from me to call for the guy to remove his mask. As District Sports Page's Dave Nichols pointed out on Twitter, considering the man got through security and considering he paid $325 for his seat, he can wear whatever he wants (within reason). Doesn't make it any less creepy, though. 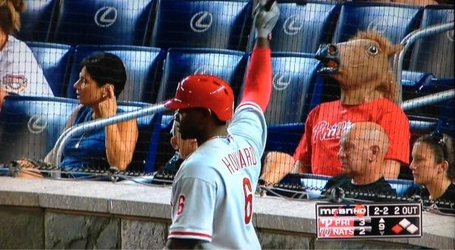