Donovan McNabb Refuses To Spark Controversy In His Return To Philly

Share All sharing options for: Donovan McNabb Refuses To Spark Controversy In His Return To Philly

Much ado has been made since the NFL released its regular season schedule over the summer concerning Donovan McNabb's return to Philadelphia as a member of the Washington Redskins and the reactions it would draw from around the NFL. McNabb week is upon us, and excuse me if I stifle a yawn or two, but it's been about as interesting as an Andy Reid press conference.

McNabb has always been depicted as a tragic hero by the mainstream media. He was the leader of a football team whose city will fall dead at an athlete's feet one minute and demonize him the next. Philly fans are a fickle bunch and McNabb constantly experienced the highs and lows associated with being a star in the City of Brotherly Love.

The lows include several brutal injuries, a tough loss in the 2004 Super Bowl, and a benching in the middle of the 2008 season among other things. The highs include a soap opera Super Bowl run in 2004 with Terrell Owens, five appearances in the NFC Championship game, six Pro Bowls, and holding nearly every single relevant passing record in Eagles franchise history. 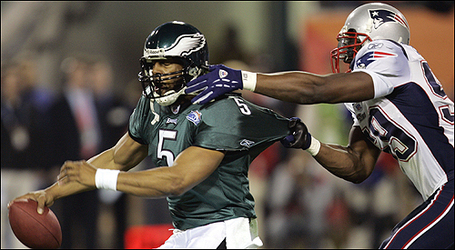 McNabb might never have won the ultimate prize for Philadelphia, but he made the Eagles the team to beat in the NFC for nearly an entire decade, snatching them from the dregs of the league and transforming them into a perennial Super Bowl candidate.

Now that McNabb has been traded to the Eagles' division rival in a stunning offseason move by Reid, you would expect to be bombarded by controversial headlines and testy interviews. The Redskins and Eagles don't particularly like each other; McNabb has to feel slighted after being not only traded, but dealt within the division; Philadelphia fans want to beat McNabb, but they are divided between Team Kolb and Team Vick; with Vick starting he will square off against McNabb on the same field where the two played each other in the 2004 NFC Championship game. Storylines abound, people. There's enough beef between these two teams to shoot 10 years' worth of Campbell's Chunky Soup commercials.

Keeping all the side-plots of this game in mind, I ask you: Why does the hoopla surrounding this game seem so stale?

We are smack dab in the middle of McNabb week, and so far no fireworks have emitted from either McNabb or the Eagles. Reid expressed regret over having to part with McNabb while McNabb said he expects more cheers than boos. All the players involved in this game have praised Michael Vick and his recent resurgence. Everyone is spending too much time being modest and gracious instead of taking some potshots.

Come on guys, this friendly political-correctness is not why I follow professional football. Sportsmanship is one thing, but I'll take some refreshing candor in the middle of the week. I know it's going to be an emotional game for many of these players. McNabb won't admit it, but he wants this one more than any game he's played since his Super Bowl appearance. Reid has to win it to save face after trading McNabb away. If the Eagles lose on Sunday, their fan base might torch the city. There's a lot of raw emotion here and for some reason the players won't let us see it.

All I want is a peek at the personalities behind this intriguing match-up. And damn it, they won't open up even a little bit.

Maybe if Kevin Kolb hadn't been benched, reporters would have more to work with. Reid traded McNabb because he felt he could win with Kolb. The Kolb experiment lasted all of one half as he sustained a concussion against the Green Bay Packers and struggled mightily before leaving the game. Vick took over and hasn't relinquished the job since. 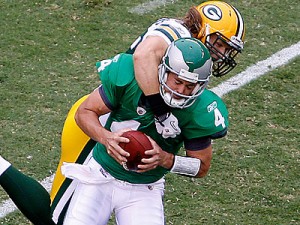 Had Kolb played well and already established himself as reliable QB in Philly, McNabb would have felt more pressure to win on Sunday. What could be better than sticking it to Reid and the Eagles by beating his successor in front of a crowd who had worshipped him for 11 years? However, Reid broke with his usual principled nature and abandoned his starter in favor of Vick. So instead of Kolb, McNabb will play his friend and pupil in Vick, toning down what could have been a sore subject.

With Kolb out and everyone playing nice, it's made for a dull week. The popular subject here in DC is Clinton Portis and his Totti-like flop on a 27-yard run against the Rams while Philadelphia revels in the Eagles' 2-1 division leading record. Hopefully, a good game will make up for the lack of drama following up to the contest.

And here's to a fiery postgame tirade or two in the bowels of Lincoln Financial Field after a colossal clash between a quarterback and the team who turned him out on their own terms. It's the least we deserve after a week of polite nothings.