The Redskins are far from a finished product, but somehow, they sit atop the NFC East standings. The only explanation is to invoke Al Davis' legendary phrase.

No one should mistake this version of the Redskins with the 1991 Super Bowl team, but they are in first place in the NFC East and have the first winning streak since 2008. As mentioned last week in this column, there is still LOTS of room for improvement on this team.  However, as the "late" great Al Davis once said, "Just Win Baby!" (I know he's still alive ... legally anyway).

... at the Redskins says the team still has a long way to go offensively. They're struggling running the ball, protecting the QB and throwing the football to someone not named Santana Moss or Chris Cooley. If the Redskins' offense does not start scoring more touchdowns, the Capitals will pass them in scoring by week's end. The running game still is not there yet. Defensively, they give up LOADS of yards, and Special Teams seems to be their own worst enemy with untimely penalties at times.

says they are finding ways to win while still learning new systems on both offense and defense. Another offensive weapon is emerging in Anthony Armstrong. Brandon Banks has added big play ability to the special teams and needs to get some offensive touches. The defense is making stops and plays when needed. Donovan McNabb is making big plays and not losing games despite spotty protection.

The truth probably lies somewhere in between. 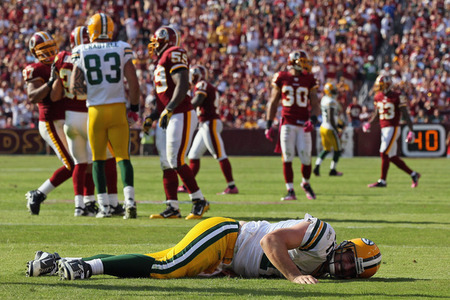 Good teams take advantage of breaks, and the Redskins got plenty of them

The Green Bay Packers were not the healthiest team coming into the game ... and then they lost their top two tight ends in the first quarter - Jermichael Finley and Donald Lee. Then, later in the game they lost LB Clay Matthews who was working over the Redskins offensive tackles. He had 1.5 sacks, 2 tackles for loss and three quarterback hurries before leaving with a hamstring injury. Shortly thereafter, the Redskins found offensive rhythm.

The Packers left points on the field in the first quarter when they went for it on 4th down and goal from the Redskins 1 and came up empty. They also had a 209 to 24 yardage disparity in the first quarter alone that should have added up to so much more than a 7-0 lead. The Packers also helped the Redskins out with two penalties on the game-winning field goal drive in overtime. If you let teams hang around in the NFL, they will usually beat you, and that is exactly what happened to the Packers.

Defense gets it done again

Okay, admit it ... that was an AWFUL start for the defense. But they sure did finish. Jim Haslett's group bent quite a bit but never truly broke. LaRon Landry and Brian Orakpo once again were the stars of this group -- Landry with his 13 tackles, forced fumbled, and yes game-winning interception, and Orapko with his two sacks despite being held the entire game. Lorenzo Alexander continues to make plays every week as well, whether he is rushing the passer, in coverage or when asked to make plays on special teams. 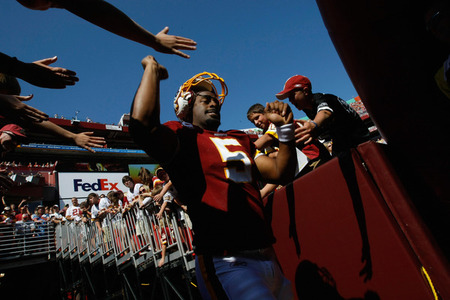 What a difference a Pro Bowl QB makes

Donovan McNabb got hit A LOT, had no running game, struggled for much of the day with erratic throws and couldn't get anyone not named Cooley or Moss involved for most of the game, but somehow still put up 357 yards passing and his team won. He did not turn the ball over and he made plays when needed. He may also have found a reliable second WR in Anthony Armstrong, who had three catches for 84 yards and the team's lone TD of 48 yards.

Mike Shanahan no longer uses his own invention

The man who invented the "icing the kicker" move does not do it anymore. Shanahan passed on the chance in overtime of the Texans loss and paid for it. Yesterday, he passed on "icing" Mason Crosby with seven seconds left from 53 yards, but fortunately for Shanahan, Crosby's attempt hit the left upright.

Can we stop crying about the NFL Overtime rule already?

The biggest gripe about OT in the NFL is both teams are not guaranteed an offensive possession, though that will change in the playoffs this season. Here's the thing, though. There are three phases to football: offense, defense and special teams. If you take care of your business in those areas, you will get the ball back, sometimes not once, but TWICE.  The Redskins did that, and also had multiple possessions in the overtime loss to the Texans.

The Redskins are fortunate Trent Williams did not tear his ACL on what was a truly worthless/hopeless play at the end of regulation.  McNabb's Hail Mary attempt was picked off, and during the return, William's knee got rolled up.  The ball was never close to end zone. The best-case they get a pass interference call, but not likely, especially on Charles Woodson, who held on every play and got away with it. Next time, take a knee and perhaps save a knee. 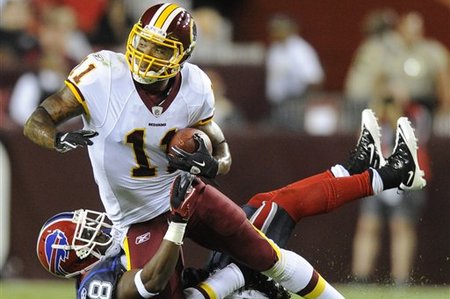 I understand why Redskin fans are bummed out about the release of the former 2nd rounder because it is another wasted pick at WR. No one had emerged until Armstrong today, and Thomas has loads of talent. However, the sports world is full of failed athletes that had talent and never produced. The case for Thomas is he never had enough chances in games. The case against he never earned the right to play much on Sunday's because of his preparation, or lack thereof. Keep in mind that coaches want to win at all costs and most would run their own mother over with a car to do it. For whatever reason, two very different coaches never trusted Mr. Devin Thomas.

Bounce Back 'W' for Midshipman

A week after likely losing their stronghold on the Commander and Chiefs Trophy, Navy QB Ricky Dobbs threw a game-winning touchdown pass with 26 seconds left in a 28-27 win over Wake Forest.  Dobbs rushed for 22 times for 100 yards and two touchdowns and also threw for 94 yards and two more touchdowns. Navy is now 3-2.