Who are the five more important players on the Washington Redskins' roster? Our list begins with the man who wears number five.

Share All sharing options for: D.C. Rank and File: The Top Five Most Irreplaceable Washington Redskins

For the purpose of this ranking, we will define "Irreplaceable" as follows: if the Redskins had to replace this guy immediately and for the rest of the season, what kind of material impact would that have on the outcome of our near-term performance? The emphasis is on immediate replacement as opposed to the future value of a guy.

This means that a 30+ year-old player could potentially compete with a rookie franchise-player type. I have done this now for the last few seasons and there have been few debates that have drawn as much criticism and praise as this one. I look forward to being clobbered by your comments. 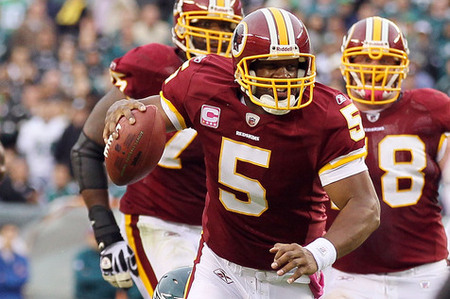 Wow ... I can't believe I am picking him first to be frank. I recently named him as the dark horse in the NFL MVP race after five weeks. At 3-2, it is hard to call anybody on our roster a legit NFL MVP candidate, yet I look at what the Redskins have done and I simply must conclude that without No. 5, our record is AT BEST inverted, if not worse.

Remember when Cal Ripken won the MLB MVP on a losing team? Well, we are not a losing team, but it simply must be noted that McNabb's contributions are keeping us in games. He is not blowing anyone's skirts up with stats. I realize MVP-worthy players have stat lines that make Kim Kardashian's numbers look paltry.

But if you lay down a rather keen scan of the league in 2010, the difference between winning and losing has come down to a play here and a play there. McNabb has lived in that space ... running for first downs and converting in clutch situations. Could he shine brighter? Oh yeah. But if you can't appreciate what he is doing for us this season, you need help. 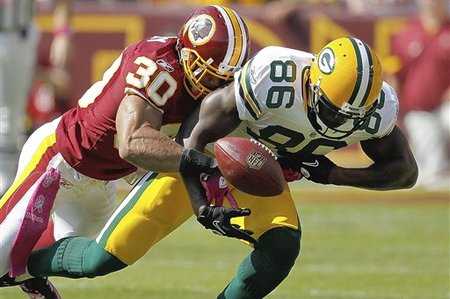 Growing up, I used to attend Navy football games. My grandfather would tell me, "On this play we are just going to watch the middle linebacker." We would spend the whole game moving from player to player, focusing on just one guy at a time.

I have kept that spirit alive at FedEx, and I have spent a considerable amount of time focusing on No. 30. The guy is all over the place. As irritating as he has been in recent years, he is that impressive this year.

He made the decisive play in OT against the Packers, but he has been solid all year for us. We spent all offseason marveling at his bulk but the fact of the matter is that his participation in the offseason program has really appeared to benefit him. As a first-round selection of a down-and-out franchise, this kind of progression is exactly what we have been waiting for in D.C. 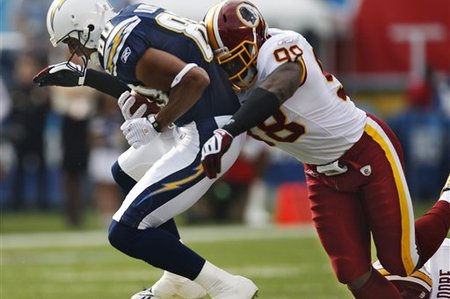 He could have been the No. 1 guy on this list, and it is at least a toss-up between him and LaRon on defense. The guy is a factor -- you can see opposing offenses trying to account for him. The refs could easily call three or four more holding penalties per game on Orakpo's blockers. Perhaps he will receive those calls more frequently as he further establishes himself in the NFL.

Right now, he is an explosive pass rusher that is slowly getting comfortable defending other parts of the field. His raw ability to beat blockers puts him in an elite class of players. To be fair, he may very well be our best player (I will make the argument otherwise to my detriment). Without his attack from the edge, we lose the game against Dallas. This guy will absolutely win us more games this season. 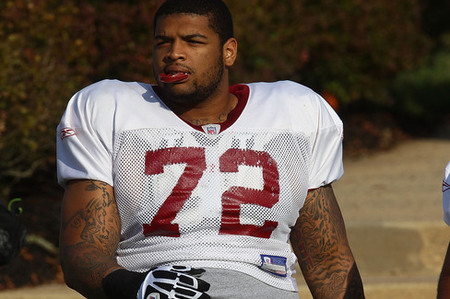 I know we are weighting things more on the short-term side here, but I look at TW and I see a guy who I think is the best player on our entire roster. The only thing keeping him from being No. 1 on this list is the fact that he has been bitten a little by the injury bug.

At left tackle, he mans one of the most important positions on the field. His unique combination of athleticism, size and strength makes him the kind of player you can build a roster around for years to come. His presence instills confidence in his teammates and his talent causes opposing defensive coordinators to devise ways around him.

In a town that values its offensive linemen more than most -- despite a dearth of attention paid to it by the organization -- a guy like Trent Williams is as irreplaceable as they come. You don't find starting left tackles on the street. This particular one is special. Please don't take him for granted. 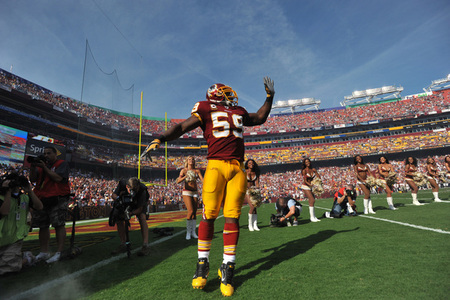 I am guilty of forgetting London some days. I hate myself for that. He has been such a consistent player and contributor to this franchise now that if you don't appreciate this guy, you just aren't a fan.

He is the leader of our defense and the heart of the team. He plays with an intensity and spirit that is rare even among his peers. Despite the fact that he is nearing the end of his career, he remains one of the most integral members of the team.

Listing stats to defend his inclusion here demeans him. If the Redskins found themselves without his services for the rest of the season, there is no way they could replace him.