Five Keys To A Redskins Victory: Control The Clock To Beat The Colts

Share All sharing options for: Five Keys To A Redskins Victory: Control The Clock To Beat The Colts

After five weeks of football, the Washington Redskins sit atop the NFC East as they head into this Sunday's game against the Indianapolis Colts. The matchup is one between a pair of 3-2 teams, but let's face it; the Redskins are huge underdogs in this game.

Indianapolis is the model of consistent success in the regular season while Washington is still finding its feet when it comes to winning games week in and week out. They have proven they are a much tougher bunch under Mike Shanahan, but Indianapolis is a different monster from that of Green Bay, Dallas or Philadelphia. Peyton Manning doesn't drop prime time games very often, and the Colts can only lose two more games on the year if they want to win 12 games for the eighth straight season.

The Colts are that game on every opponent's schedule where fans point to it and chalk it up as a loss before the season even starts. Needless to say, I pity the AFC South's unfortunate circumstances.

As big a showdown as this is, I don't believe the game is a must-win for Washington. I hate to downplay one-sixteenth of the season, but the Redskins don't have to win on Sunday to save their year. Naturally, a win would send a clear message that they are legitimate contenders in the NFC, but it's an out-of-conference matchup and the Redskins have shown themselves to be a resilient football team who will compete in every game. A loss to Indianapolis would not send the season into a tailspin.

However, there's no question Washington would love to defend their home field against a vaunted team such as the Colts. Here's how they can. 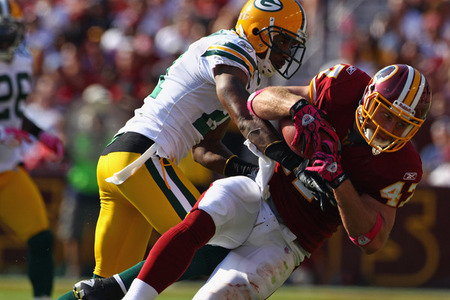 Only five teams have a higher turnover differential than the Redskins +4 margin this season. It's especially key in this game to limit turnovers because the Colts have only turned the ball over five times on offense. Manning has thrown just two interceptions while attempting a league high 216 passes. Indianapolis won't give the ball away, which means Washington can't either. Extra possessions for Manning translate to Indianapolis winning the time of possession battle and receiving more scoring opportunities.

With an offense as high-powered as Indy's, the Redskins have to continue to protect the football and ensure their defense isn't put in a tough spot because of turnovers. So far this year, Donovan McNabb has three interceptions and the offense has lost one fumble, giving the team an average of less than one turnover per game. They will need more of the same on Sunday.

No Points For You!

Jim Haslett's defense might be ranked dead last in the NFL when it comes to yardage allowed (410.2 yards per game), but take into account several counterpoints.

Considering the competition, the Redskins' new 3-4 defense has certainly limited the amount of scoring. They are giving their offense a chance with timely takeaways and key stops. LaRon Landry intercepted an Aaron Rodgers pass to set up the game-winning field goal last week and the defense made a huge first half stop on fourth and goal.

Quarterbacks are struggling to read the defense Haslett is setting up, forcing them to check down and abandon the vertical passing game. In fact, Washington has given up only a single pass of over 40 yards this season.
Manning is the best in the business when it comes to digesting defenses and he's seen it all. The Redskins have been disguising their fronts and blitz packages well all season, but they will have to be in top form to confound Manning.

Expect Haslett to pull Landry back out of the box more often in an effort to limit the Colts' downfield passing attack. It may result in some long drives where receivers are free over the middle, but the Redskins have been determined to make opposing offenses work for their points this year. 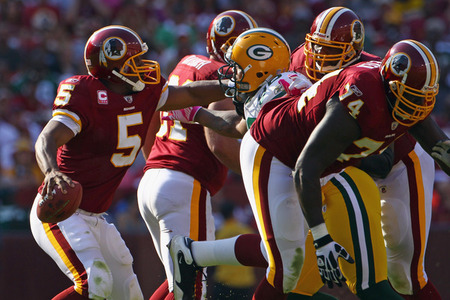 The offensive line is coming off one of their worst performances of the year as a unit. Green Bay sacked McNabb five times and paved the way for a paltry 51 net yards rushing. Clay Matthews dominated Jammal Brown on the right side, Trent Williams injured himself again, Kory Lichtensteiger was a turnstyle, Casey Rabach was pushed back often and Artis Hicks looked like the backup he was expected to be.

The Packers are the best pass-rushing team in football, but the task doesn't get much easier this week withDwight Freeney and Robert Mathis coming to town. Williams is expected to start this week and will likely draw Freeney as his adversary on the line.

Freeney is probably the quickest pass-rusher Williams will have ever faced. He's light and explosive off the snap, which should pose a new test to Williams. The rookie left tackle has been solid and occasionally dominant against against the likes of DeMarcus Ware and Mario Williams, but Freeney is a different breed. He's quicker than the other two and possesses a terrific spin move.

The Williams-Freeney battle will be something to keep an eye on all game long, but so will the matchup on the other side. Brown had serious issues with Matthews last week and Indy will try to expose him again with Mathis. Mathis and Freeney have combined for seven of the Colts eight sacks and the former actually has four of those. Brown is a liability against speedsters like Mathis since he suffered a season-ending hip injury in 2009. He lacks the mobility needed to stop him and that could be a problem.

McNabb has done a good job avoiding sacks. He's been around long enough to know how long he can extend a play and against Indianapolis I believe he'll have time because their pass rush is so one-dimensional. The Colts are great at generating pressure off the edge. They aren't so good at penetrating up the middle, meaning McNabb could make a living by stepping up in the pocket most plays.

Time to dust off the running backs. Washington is averaging 22.6 rushing attempts per game while Indianapolis is at 25 per game. Neither team has experienced much success running the ball as the Redskins are averaging 3.9 yards per carry and the Colts stand at a lowly 3.2 YPC.

Of course Indianapolis has never been much of a running team since the departure of Edgerrin James and they won't be in panic mode if both Donald Brown and Joseph Addai miss this week's game with injuries. However, the Redskins need their offensive line to play well against an undersized Colts defensive line to get the ground game going.

Washington has been on the short end of the time of possession battle in every game with the exception of last week's. The absence of the running game against Green Bay would have hurt them had not the defense been so effective in the second half. However, Washington can't depend on their defense to shut the Colts out for a whole half without their offense controlling the clock. McNabb and Co. have to spend the majority of the game on the field against Indianapolis to keep Mannning on the sideline.

The Colts have the 29th-ranked run defense in the NFL and the Redskins have a physical runner in Ryan Torain. If Torain establishes himself early, he'll receive carries throughout the night and be a huge factor in knocking off Indy. 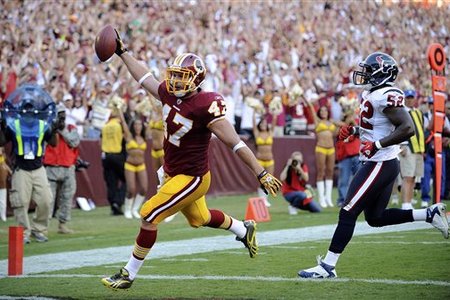 Red zone proficiency is the bane of this team in 2010. Washington's touchdown percentage when they march inside their opponent's 20 stands at 23.08 percent. Only Carolina is worse when it comes to converting in the red zone. The Redskins have also been unable to extend drives into the red zone consistently. They average just 2.6 trips inside the 20 per game (22nd in the NFL).

Drives into the red zone mean more time of possession and an enhanced opportunity to score points for some teams. The Redskins have stalled out short of the red zone too often, which is a contributing factor to their inability to finish teams off. They botched a short field goal in the second half against Dallas and had another chippy blocked the next week vs. Houston. Against St. Louis and Philadelphia, two promising drives stalled out due to poor playcalling. The Redskins had to settle for field goals on both.

Washington needs to play smart when they get inside the 20 so they can keep the momentum going from possession to possession. Shanahan is still getting to know his personnel, but I can't help and cry out for more use of the tight ends in the red zone. Fred Davis is the best red zone target on the team and Chris Cooley is money down the seam. Sooner or later the Shanahans will figure it out, but the red zone issues are becoming worrisome.

The Redskins can't leave points on the field this week against a team like Indianapolis or that loss we all expected when we looked at the schedule in July will become a reality.