Chain Reactions: Washington Redskins Are Not Ready for Prime Time

The Redskins had plenty of opportunities to beat the Colts, but dropped the ball (literally) on knocking off Peyton Manning and company in primetime.

Share All sharing options for: Chain Reactions: Washington Redskins Are Not Ready for Prime Time

The Redskins loss to Peyton Manning and the Colts may not be surprising, but it is certainly frustrating when you consider the state of the NFC right now. The defending Super Bowl Champion New Orleans Saints are dealing with the Hangover from last year and injuries. The Atlanta Falcons, who had looked impressive in the first five weeks, had their wings clipped by the Philadelphia Eagles. :ast year's runner-up, the Minnesota Vikings, have stumbled out of the gates (thanks in part to their text-messaging quarterback). The preseason favorites, the Green Bay Packers, are struggling with injuries. Finally, the Dallas Cowboys (now 1-4) ... well they stink. (I did not bother to mention the NFC West because it is a complete joke).

A win over the Colts would have had the Redskins towards the top of the heap of the NFC. Instead they will have a week to wonder what if. 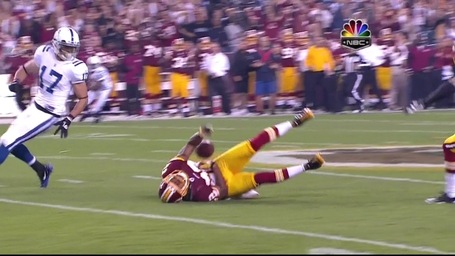 Redskins drop the ball on opportunity to beat Colts

Carlos Rogers DROPPED an interception on the Colts first possession, and then for good measure dropped another on third possession. What can you say that already has not been said about Carlos Rogers? He is in position to make picks all the time, but he can't catch a cold. Does he need to get his eyes checked? Does he need hand surgery? Is it all mental? Is he living his own personal Ground Hogs Day every Sunday?

Then there was safety Kareem Moore, who has issues with the running game. He also dropped a pick in the first quarter.The Redskins also missed on a second-quarter fumbled punt by the Colts.

Dennis Green should have delivered the post game speech. "They are who were thought they were and we let them off the hook!"

Could the Albert Haynesworth saga be coming to an end?

Once again Albert Haynesworth became part of the story. Haynesworth was inactive after missing six days after the death of his half brother. Mike Shanahan cited fitness level and game-plan implementation for reasons to sit the defensive tackle. Haynesworth told NBC's Andrea Kramer he thinks he may be traded by Tuesday's trade deadline because he does not fit into the defensive scheme.  Meanwhile Bruce Allen told Andrea Kramer of NBC that "yes, he will still be a member of the Redskins" after Tuesday.

It sure seemed like a night they could have used Albert in the middle of the defense. That said, if you are looking to gain public favor, stand on the sideline next time with your teammates instead of sitting in a luxury box.

Ryan Torain is a downhill runner and he runs angry. Last night, he rushed for 100 yards and two touchdowns, giving the Redskins their best running game of the season. He became the first running back crack 100 yards in the team's past 13 games. Ladell Betts had 114 yards on November 15 of last year.

The Colts countered the Redskins' big rushing night with one of their own. They rushed for 170 yards as a team, the most they've rushed since totaling 226 yards on the ground against Shanahan's Broncos back in 2007. I guess there's just something about the running game against Shanahan's teams. I wonder if Haynesworth could have helped.

Manning wears a big helmet for a reason

Peyton Manning's numbers alone are impressive -- 25 of 38 for 307 yards, two touchdowns and a quarterback rating of 108.1. However, that is not the reason he is truly great.  He is, quite literally, the Colts' offensive coordinator, always dialing up the right plays.

There were two times when the Redskins seemed to have seized some momentum, but Manning answered with scoring drives. When the game tied it at seven late in the first quarter, Manning led the Colts on an 84-yard drive on their next possession for a touchdown to put them back ahead. Later, in the third quarter after the Redskins cut the deficit to 17-14, Manning exploited their defense with a ground-oriented drive, led by Joseph Addai, putting the Colts back up 24-14. 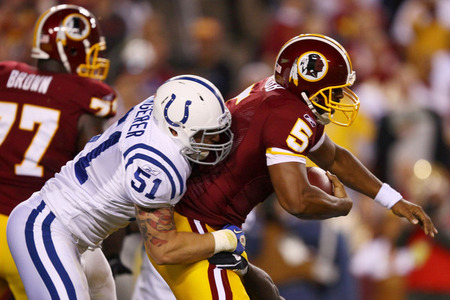 Cris Collinsworth said last night on the NBC broadcast that the Redskins are working with Donovan McNabb on spreading his stance out and getting ball out of his hands quicker. They don't seem to like McNabb's footwork, especially how he puts feet together when he gets ready to throw. They want spread out his motion, because with better delivery, there will be better accuracy, which has been an issue throughout McNabb's career.

This story reminded me of Marty Schottenheimer tweaking Darrell Green's technique at training camp back in 2001. Some coaches can't help themselves, no matter how accomplished the player happens to be.

More importantly for McNabb and the passing offense would be tweaking the offensive line's protection. As NBC pointed out, McNabb is hit by an opposing team's defense on 28 percent of his passing formations, second most in the NFL. OUCH!

Collinsworth also told a story about Laron Landry using a fake ID when he was five years old to play with seven- and eight-year old kids. That's kind of an odd story, since usual kids do not have id's at that age. It's more likely that Landry had a fake birth certificate, or perhaps it was his parents fibbing about his age.

Anyway, Joseph White had the story first in the AP.

He's the kid who once used a fake ID so he could start playing football when he was 5. And when an older boy dared him"to jump out of the back of the truck like Superman" on the way home from practice, little LaRon actually did it - and busted up his teeth. 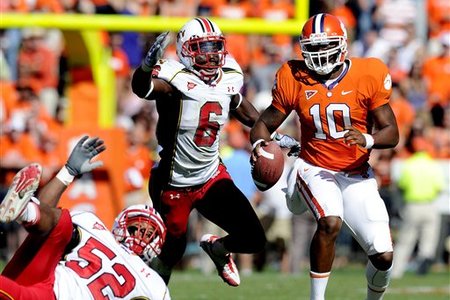 Terps not ready for prime time

Maryland was exposed at Clemson, getting blown out in a 31-7 loss. It was Maryland's 10th consecutive road loss.  Afterwards Ralph Friedgen let loose.

"We're young and I can make all the rationalizations," Friedgen said. "But it's really a matter of getting it done and not getting it done. And it's not getting done. It really isn't. I am going to start holding people's feet to the fire."

You can't blame the Fridge for freaking out, because his job is on the line this season. They are now 4-2 (1-1 in ACC) and need to squeeze out two more wins to be bowl eligible. Will it be enough to keep Friedgen around another year?

(On another note, as Mike and I discussed on "SB Nation Radio," I think it's a good thing that new athletic director  Kevin Anderson does not want cursing at games. Maryland fans' behavior has crossed the line too many times to not take action).

I know Navy beat SMU 28-21 on Sunday, but I can't focus much on the game because I find it amazing that a program that was put to death is still playing college football. Sure there is no "Pony Express" anymore at SMU (Eric Dickerson and Craig James, a former Washington Federal), but it's pretty remarkable.

All kidding aside, Navy has righted the ship since the loss at Air Force with a pair of close wins. Navy is now 4-2 and well on their way towards making yet another bowl appearance.