Sunday night's loss to the Indianapolis Colts showed that the Washington Redskins can compete with anyone. It also showed that they still need to work on executing in key moments.

Share All sharing options for: Attention To Detail The Name Of The Game For The Washington Redskins

The 2010 Redskins have certainly come a long ways since the Jim Zorn era. During the team's toughest three-game stretch of the season, they took two, and now have a pair of winnable games before a bye week. A 3-3 record is nothing to write home about, but in the wacky, wild NFC, Washington is right in the thick of things.

Sunday's loss to the Indianapolis Colts was certainly disappointing, but it was an out-of-conference matchup against a team who has far more experience and talent than the Redskins. Though a victory would have sent expectations through the roof, it wasn't a must-win game, and they know that.

For the life of me I can't put my finger on what makes this Redskins team tick. One moment I think they have the talent to be a true contender, and the next they prove to me they still have a long ways to go before we can all start planning to purchase tickets for the Super Bowl. Inconsistent play has always been the norm in Washington, but despite the inadequacies of this team, they have managed to compete against far superior opponents. 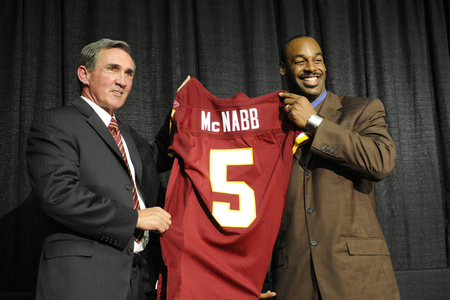 Maybe Donovan McNabb and the new coaching staff adds an edge to the team. But when you look at a defense ranked dead last and a quarterback struggling to find his way in a new offense, that doesn't make sense. The defense has created turnovers and is certainly better than the stats indicate, but they could have easily given up 40 points on Sunday night. The Colts missed two field goals and Joseph Addai fumbled the ball deep in Redskins territory. There's 13 points.

(On the flip side, the Colts did dodge a bullet on a first half drive when Kareem Moore dropped an easy interception. Indianapolis would go on to score on the drive).

Football goes both ways, and so far this season it's been a 50-50 split between the Redskins and whoever they are playing in a given week. The defense has it's moments, but in all honesty, the Redskins need better personnel to run the exotic formations they want to use. The offense is crippled by inconsistent play along the entire offensive line plus McNabb's erratic play.

Yet somehow the Redskins are in every game.

The offensive line has struggled as a unit to develop chemistry, making it difficult for the rest of the offense to establish any sort of rhythm. Stephon Heyer derailed several possessions with mental errors against St. Louis and Philadelphia, while Trent Williams had a bad holding penalty Sunday night to negate a big run by Ryan Torain on the first play of the second half. The penalties are putting Washington in long yardage situations, and the flags always seem to fly at the wrong time. It isn't easy to convert a 3rd-and-12, but the Redskins could make it easier on themselves if they simply execute on first and second down.

Luckily, Ryan Torain gives them the ability to set up manageable second and third downs. He rarely goes down upon initial contact and is averaging 4.2 yards per carry. If the Redskins can continue to get him successful touches, the offense will have an easier time of it.

Defensively, the Redskins have made timely plays all season, but their play on the whole has been uneven. Sunday night was the same mixed bag we've seen all season. Washington was physical and created turnover chances. They also gave up a long touchdown pass and missed too many tackles trying to strip the ballcarrier. It's been difficult to predict which version of the defense will take the field each possession. 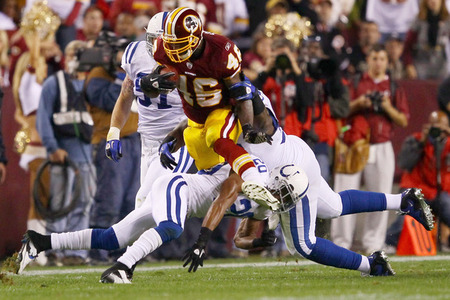 The biggest concern the Redskins should have is their inability to put all of the individual efforts together to create a consistent performance. Washington had two long scoring drives against Indy, but sandwiched between those drives were four punts, a missed field goal and 10 points off Colts turnovers. Meanwhile Indianapolis managed to reel off 20 points in that span.

The Redskins offense was badly outworked and to an extent undid themselves. Penalties killed key drives, missed blocking assignments ruined plays, several inaccurate McNabb passes led to incompletions, and the list goes on.

The defense also came up short in a vital moment. Indianapolis came onto the field following a Torain touchdown, which made it 17-14 Colts in the third quarter. On the previous Colts possession, Brian Orakpo had stripped Peyton Manning to set up the Redskins score. The momentum was tilted towards Washington. And yet, the defense had no answer for Joseph Addai.

First play of the drive: Addai races through the defense for a career-long 46-yard scamper, and three plays later he took it to the end zone, giving Indy a 24-14 lead. As always, Moore took a poor angle and failed to bring Addai down on the 46 yarder. It's been a weekly ritual watching Moore flail helplessly at the feet of an opponent or just whiff completely, and the missed tackles have led to big plays for opposing offenses. 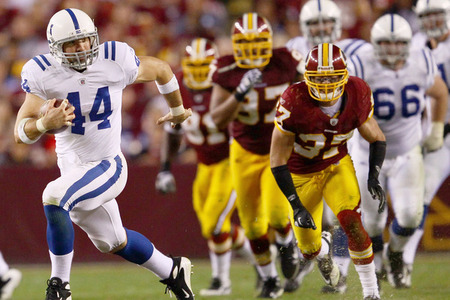 The Redskins are beginning to put themselves in a position to experience success. Now it's time for each player to ensure the team as a whole buckles down in the big moments and executes.

Washington is mentally tough this season, and it is apparent the team expects to win every time they step on the football field. Credit the coaching staff for instilling them with the belief they can stand toe-to-toe with anyone. They are physical, mean, and ready to shed the image of a perennial underachiever.

The Redskins might not be the most talented group, but they don't care about that on gameday. And that's better than last season, when they couldn't have cared less about gameday period.