With Blood In The Water, Brian Orakpo Moves In For the Kill Against The Bears

Brian Orakpo is a fearsome pass rusher, but he hasn't quite become a DeMarcus Ware or Clay Matthews. Fortunately, a matchup against Jay Cutler and the Bears might be enough to jumpstart Orakpo's rise to elite status.

Share All sharing options for: With Blood In The Water, Brian Orakpo Moves In For the Kill Against The Bears

The dreaded sophomore slump can destroy any promising, young NFL career, but if a second-year veteran can build upon a successful rookie campaign, the sky is the limit. For Brian Orakpo, it's clear he can be a presence on defense for the Redskins. The question, however, is just how much of a presence he will be.

Orakpo is a fine pass-rusher. He has five sacks, 19 tackles and a forced fumble in six games, making him one of the more valuable pieces in this Redskins defense. Let's also not forget the holding penalty he drew against Alex Barron to beat the Dallas Cowboys in Week 1. In fact, Orakpo has been blatantly held at least once in every game this season, preventing him from adding to his sack totals.

But as solid as he has been, Orakpo has yet to set himself apart as an elite sackmaster this season. He is undoubtedly the best rusher on the team, but I am waiting to see him take over a game Clay Matthews style. Last year, Orakpo got some face time after a dominant four sack performance against the Oakland Raiders, and a similar outing this week against the Bears will raise his profile once again. 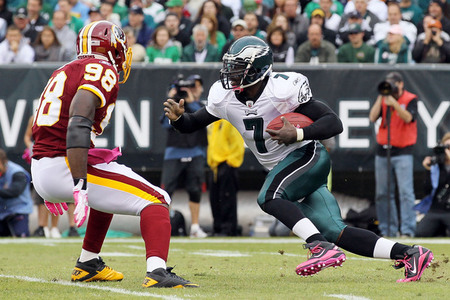 Orakpo's potent combination of size, speed and strength makes him the perfect fit as a pass-rushing outside linebacker in a 3-4 scheme. Last season, he split time between OLB and defensive end in a 4-3 and it was clear he looked his best going after the quarterback. The rookie from Texas notched 11 sacks and emerged as bright star on a defense desperate for playmakers.

Heading into 2010, expectations were high for Orakpo to become a top-flight pass rusher, especially after Jim Haslett entered as the new defensive coordinator. Haslett has placed an emphasis on pressure and turnovers, meaning Orakpo is in on more opportunities to hit the quarterback. The Redskins have begun to employ him predominantly as a pass rusher at OLB in a 3-4 scheme where he can wreak havoc in opponents' backfields.

The transition has been a rocky one for every player on the defense, but Orakpo has been one of the few to really stand out thus far. He needs a standout performance to take the next step as a playmaking force and this week he has a prime opportunity to take over on the field.

As the Redskins head to Chicago, I can't help but feel Orakpo is going to have a breakout game. The Bears' offensive line is in shambles, having surrendered 19 sacks in the past three games and it will already be using its fourth different starting offensive line combination against the Redskins on Sunday. Left tackle Frank Omiyale is new to the position having played left guard in 2009 while the Bears are starting seventh-round rookie draft pick J'Marcus Webb at right tackle.

So let's just say Orakpo is licking his chops at the prospect of pursuing a quarterback who holds the ball too long and is operating under a Mike Martz vertical passing attack. Yep, Jay Cutler hasn't exactly lived up to his billing since the Bears mortgaged the future by giving up two first-round picks and Kyle Orton (strangely, Orton has more passing yards, touchdowns, and completions than Cutler this year, but that's another story). Cutler suffered a concussion in a 17-3 loss to the Giants in which the offensive line gave up 10, count 'em, 10 sacks and he has been very inconsistent in the four and a half games he's played.

Considering the pressure Cutler has faced, the inconsistency is somewhat merited. Martz's schemes involve plenty of downfield routes, which take a long time to develop. Given the patchwork offensive line and Cutler's gunslinger mentality, there's no reason Washington and Orakpo won't get their sacks. 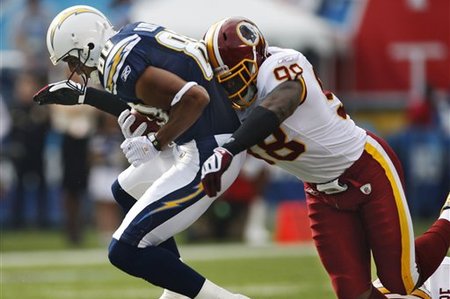 The Redskins defense desperately needs Orakpo to establish himself as a player opposing teams must gameplan around. Someone like that can boost the entire unit, giving them an ingredient guaranteed to create sacks, turnovers, and much-needed scoring opportunities. We all know several multi-sack contests from Orakpo will go a long ways towards cementing his image as an elite pass rusher around the league.  What could be better than to showcase his array of talents with a signature performance against Chicago?

Every week the Redskins worry about having to prepare for a DeMarcus Ware or Julius Peppers. What if they had a Ware-like weapon at their disposal? Orakpo possesses that potential; he simply needs to put it all together. Look for it to happen come Sunday.