Trying To Make Sense Of The Wild Redskins-Bears Game

Share All sharing options for: Trying To Make Sense Of The Wild Redskins-Bears Game

Just to review, the following things happened in the second half of today's game between the Chicago Bears and the Washington Redskins:

We didn't even mention one play where Chris Cooley fumbled, then slapped the ball ahead to prevent the Bears from recovering, or the play where LaRon Landry had an interception, but went for a big hit instead, causing the ball to ricochet off his helmet and go backwards 20 yards. Torain also fumbled another time, on a play recovered by Anthony Armstrong, and Donovan McNabb even fumbled on his own goal line before recovering the fumble before his interception that was called back.
Tally it all up, and today's second half featured eight turnovers and four other plays that should have been turnovers. Here's a better way to put it: only two second-half drives (not counting the Redskins' kneel-down drive) did not end in either an interception or a fumble. And this was in a game between two teams that could both potentially end the week in first place in their division.
But hey, a win's a win. Below the jump, some video and pictures to sum up this wacky, wacky game.
Here's the first-half interception by D.J. Moore for a touchdown, on a play we didn't even mention. See how easy it is to forget the first half ever happened?

And, of course, here's Hall's 92-yard interception return, which was definitely the highlight of the game. This photo by SBNation.com's Chris Mottram provides a better look. 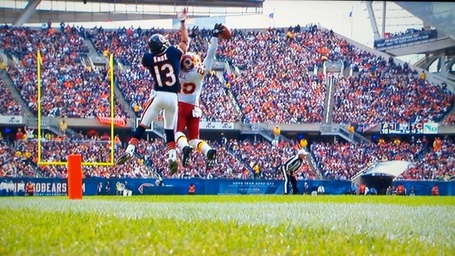 And then, there was the real highlight of the game: Hall's celebration after taking the ball back for a touchdown. Naturally, Aikman ruined the fun by claiming this merited an excessive celebration punishment. Listen, Troy, when Hall is the only player that can get into the end zone in the second half, he's allowed to do what he wants. 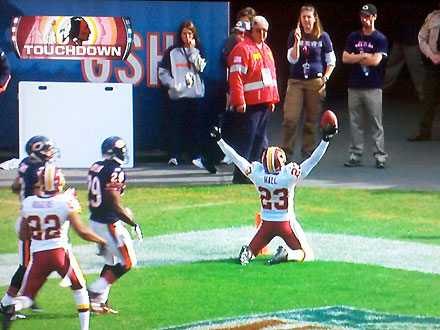