Albert Haynesworth Is Emotional In His Dominance

Share All sharing options for: Albert Haynesworth Is Emotional In His Dominance

On the same day that Mike Shanahan insisted that the Redskins had no intentions of trading Albert Haynesworth, despite several reports prevously indicating that they were willing to accept a second round draft pick for him, the big defensive lineman had his best game of the season.

It wasn't just Haynesworth's three tackles and one sack that impressed us. It was his constant pressure on Jay Cutler. Haynesworth spent more time in the Bears' backfield today than he spent in Ashburn all offseason.

Haynesworth's involvement was crucial in holding Cutler out of the end zone and allowing London Fletcher to force him to fumble on this play in the third quarter. 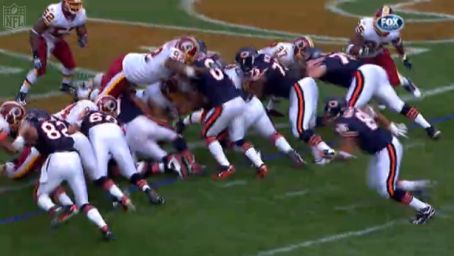 If I had that big dude jumping on me, I'd probably fumble the ball too.

After the game, Albert Haynesworth told Mike Jones of TBD.com that his emotions over the death of his half brother two weeks ago helped motivate him today.

"It just felt good to go out there and play and get life situations off my mind," Haynesworth said. "It helped a little bit. It was right before, when we were warming up and stuff and I started thinking about it, and I started crying and stuff. Then, I could hear my younger brother, ‘You’re crying over me?’ and so, I had to dry it up and go out there and be a big brother and play ball."

Haynesworth also described his role, which has been somewhat redefined.

"Really, when you have a lot to think about in football, a player’s going to play slow. Now that they took me out of ‘Okie’ and they’ve got me in the nickel stuff and stuff I’m used to, I have less to think about and can go play the game."

So Haynesworth is no longer playing as a nose tackle in the 3-4. He's just rushing the quarterback in passing situations. Isn't that pretty much what Haynesworth wanted from the beginning?

I guess if he keeps playing like he did today, the Redskins will have no problem giving Haynesworth his way.