The Redskins certainly don't look like an NFC contender, but as a certain wise man once said, you play to win the game.

Share All sharing options for: Chain Reactions: Hey Redskins, You Play to Win the Game. Hello!

The Redskins' 17-14 win over the Bears will not be seen on NFL Network as the game of the week. It was not pretty.  I already used my inner Al Davis a few weeks ago, so this week, why not use this great saying from the last Presidential election. "You know what they call a pigskin with lipstick on it" ... okay, nevermind.

Instead I will go to my inner Herm Edwards: "You play to win the game ... Hello!" And "Hello," NFC contenders, because somehow the Redskins are 4-3 and very much in the mix in the mediocre NFC despite plenty of shortcomings.

By now we all know the Redskins new 3-4 defense has given up a billion yards.  However, they already have 17 takeaways this season, which equals last year's takeaway total, and have led the way in all four wins. Without the 3-4 defense, would the Redskins be 4-3? Probably not. And yet, there is still room for improvement with Jim Haslett's group.

Everyone should fight their coach

DeAngelo Hall tied an NFL Record with four interceptions and returned one for a touchdown. He was one of Jay Cutler's go to receiver in the second half, with the four connections and one TD.  Maybe he and Jim Haslett need to mix it up in meetings every week. 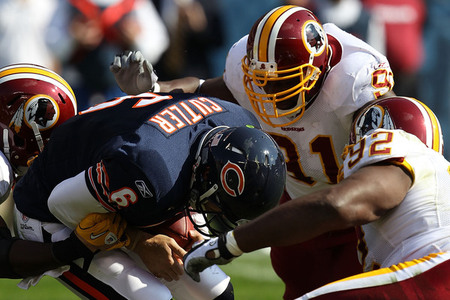 Albert Haynesworth had a HUGE impact against the shaky Chicago offensive line. On one play, he literally drove Chris Williams into Jay Cutler. Of course, there's also his huge hit on the goal line early in the third quarter, causing Cutler to fumble. I actually think Cutler may have scored, but the Redskins will take it.

Also, let's give a game ball to Bears coach Lovie Smith for not challenging the play, even though he challenged the spot of the ball on Earl Bennett's catch that got the Bears to the goal line. When Tony Dungy is calling his buddy out for the non-challenge, you know it is a bad move.

Brian Orapko had two sacks, two tackles for loss and two quarterback hurries yesterday. We figured he would break out in this game, and he did. It looks like there is another Pro Bowl in the second-year player's future.

Also, Rocky McIntosh may have had his best game of the season. He tallied eight tackles, one sack, one tackle for a loss, one forced fumbled and one quarterback hurry. His emergence has been a huge key for the "success" of the 3-4 defense.

Here's a remarkable stat for you: the Bears have scored a grand total of zero points this season in the third quarter. It's not like they didn't have their chances Sunday. First, Cutler fumbled on the goal line on a play blown up by Big Al, then, later in the quarter Cutler delivered the pick-six to Hall. The gifts keep coming!

Jay Cutler reminds me of a former Redskin quarterback

The more I watch Cutler, the more I think of Jeff George. He has a cannon arm, but he also has a crappy attitude and a losing mentality. No wonder Snyder-atto wanted him so bad.

Plus, after the game he have one of those quotes that will be played and over. No, not "that leadership stuff is over rated," because that is uniquely Jeff George's line. But he did say this mind-boggling thing when the game was done.

"I've played against (Hall) before,'' Cutler said. "There's no reason to shy away from him. That's hard for me to say throwing four picks to the guy but I still think if we had to play him tomorrow I'd go after him every time.''

Sure, Jay. Maybe it's best if you sit a few plays out, champ.

Donovan McNabb struggles continued Sunday. He gave the Bears a free touchdown with a terrible interception early in the game, and was bailed out later on another pick-six thanks to a delay of game.  Granted, he also was the victim of spotty pass protection and untimely drops by Anthony Armstrong and Chris Cooley.

However, this doesn't mean McNabb should sit. This is a new system for McNabb after 11 years in one place, and that's tough. Despite his 76 QB rating, which ranks 24th in the NFL, he has led the Redskins to as many wins as they had all of last season. McNabb can certainly play better and make more plays, but sitting him solves nothing.

Give Ryan Torain the damn ball!

Torain had another 100+-yard rushing day, tallying 125 yards and closing out the Bears with strong runs in the fourth quarter. Sure, his pass blocking continues to be a concern, and he can't fumble two times like he did Sunday, but you have to love the way he is running the football the past two weeks.

That said, Offensive Coordinator Kyle Shanahan once again came out way to pass happy in the first half Sunday, with a 23 to 13 pass/run play ratio. What happened to the run setting up the pass? Remember the talk of McNabb finally playing with a offense that runs the ball?

Best day of bad punting ever

Sorry Joe Theisman, you no longer have the most memorable day punting at Soldier Field by a Redskin. Despite the stats, Hunter Smith had one of his best games as a Redskins punter. No punter has ever looked better with a 28.7 net average, because it meant keeping the ball away from Pro Bowl return man Devin Hester. The Bears' offense was in no danger of making the Redskins pay for poor punts, and the Redskins knew it.

Plus, Smith's punting kept Hunter from moving ahead of former Redskins great Brian Mitchell on the all-time return touchdowns list. Well, at least for now.

Is it my imagination, or does Graham Gano miss a lot of big kicks?  Yesterday, he missed a 37 yard field off the left upright that would have put the Bears down by six points. On the season Gano is just 13 of 18 this year, which is good for only 72-percent, ranking him 30th in the NFL. Where are all the good kickers? Is there not a Zendejas brother, son or great grandson available? 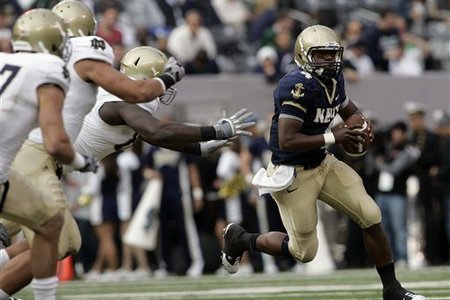 There is a generation that has no idea that Notre Dame used to be the Gold Standard of College Football and actually had won 43 in a row over Navy at one point. Well, times have certainly changed. The Midshipmen have now won consecutive games over the Fighting Irish for the first time since 1961. Saturday at the new Meadowlands, Navy blasted Notre Dame 35-17. Do you think the Eagle Bank Bowl could take the Irish instead of a team from Conference USA?

Freshman quarterback Danny O'Brien threw three touchdown passes as the Terps won 24-21 at Boston College.  It was a win they dedicated to redshirt freshman Pete DeSouza, who suffered broken bones in both legs when his motor scooter collided with a car Thursday night.

"After the game, everyone's hearts were lifted because we were able to go out and get one for Pete," Paul Pinegar said.

The win puts the Terps just a win away from bowl elgibility.