Skeletons In The Closet: The Redskins Must Beat Detroit To End The Nightmare

The Redskins re-visit their own personal shop of horrors this Halloween weekend in Detroit as they prepare to take on the Lions. They need this win badly to stay in the playoff hunt and to remind themselves the Jim Zorn era is a thing of the past.

Share All sharing options for: Skeletons In The Closet: The Redskins Must Beat Detroit To End The Nightmare

Standing at 4-3, with just a game separating them from a much-needed bye week, the Washington Redskins are at a critical juncture in the 2010 season. This week's contest against the lowly Lions wouldn't figure to be must-see TV, but for anyone who watched this team last season, Sunday's game means a heck of a lot.

The Redskins head into Ford Field with sour memories from their last visit to Detroit. When the Redskins left Michigan last year, they had just suffered a humiliating defeat at the hands of a Lions team who had gone winless in their previous 19 games. The Redskins had already shown themselves to be a mediocre team before losing to Detroit, but falling to the NFL's saddest of sad sacks confirmed that Washington wouldn't be scaring anybody in 2009.

That excruciatingly painful three-hour event essentially spelled the end of the Jim Zorn era. As Chris Horton was whistled for a pass interference call to set up a key Lions touchdown, all Zorn could do was raise his hands in disbelief as he watched his team do the unthinkable and walk off the field losers to the Detroit Lions.

Zorn lost more than a game that day; he lost his locker room. The players quit on him just three weeks into the season and went on to finish 4-12. 2009 featured medicine balls, slip-n-slides, and a bingo caller turned offensive coordinator as the Redskins further embarrassed themselves with several catastrophic performances on national television.

One could argue the swinging gate snafu against the Giants and a pair of humiliating losses to the Eagles and Cowboys were sparked by that fateful day in Detroit. The Redskins were the laughingstock of the league week in and week out and all Zorn could do was hold on for dear life. The press conferences were full of optimism, but it was the kind with a false ring to it. Zorn grimly attempted to convey his hopes for 2010, yet everyone knew he was a dead man walking.

With Zorn in over his head, the team eventually collapsed completely under the scrutiny, injuries and mounting defeats. For the last three weeks of the 2009 campaign, Washington played perhaps its worst stretch of football in 20 years, and Zorn was out the door after a loss to the Chargers' scrubs. 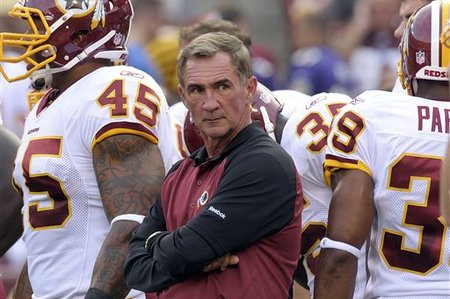 Now, a year removed from the Detroit game, the Redskins return with a different attitude. They may not be among the NFL's most skilled squads, but they are tougher mentally and eons more confident under the new regime.

You tell me with a straight face last year's edition of the Burgundy and Gold would stand toe-to-toe with the Colts or beat the Packers in overtime and I'll give you one of those fun-size Snickers for your Halloween stash. They would have been run off the field. This year; different story. The 2009 Redskins went winless in the division. This year they are already 2-0 and also boast a 4-1 conference record to boot.

Obviously, Washington has improved under Mike Shanahan, but this week will indicate whether or not the Redskins are any good. They have already dropped a very winnable game in St. Louis and to lose another one against Detroit might lead to more than a few questions concerning their legitimacy in 2010. It's a classic trap game and the Redskins have not distinguished themselves in such contests over the past decade or so.

However, there's no reason Washington shouldn't burst out of the tunnel with a Albert Haynesworth-sized chip on their shoulder. The offense has been taking heat (and rightfully so) for their spotty play under Donovan McNabb. The team has failed to string together four quarters of quality football and experts still aren't buying into them as play-off contenders (many are favoring the Lions this week).

In light of all the criticism surrounding the organization, you would hope to see a fiery, motivated team intent on not overlooking this matchup. The NFC is up for grabs, and Washington has a chance to seize control of a play-off berth so long as they keep winning. The prospect of traveling up to Detroit to play a 1-5 ball club might not sound enticing, but simply recalling the horrors suffered at the hands of the Lions last season has to be enough to get the blood boiling.

With Shanahan, the Redskins are finding ways to win. Timely interceptions, big hits on special teams, and hardnosed running by Ryan Torain are setting the tone for physical domination each and every week. Teams don't want a piece of LaRon Landry and his rekindled swagger. Opposing coaches are struggling to stop Santana Moss and Brandon Banks has transformed the return game into a viable source of success. However, all the positives won't matter if the team can't put together a convincing performance against Detroit.

Retribution is the name of the game. Washington can right a wrong with a win on Sunday while remaining on the fast track to a successful first year under Shanahan. Trap game be damned; the Redskins should be ready and willing to pulverize the Lions, exorcising the last demons still lingering from the age of Jim Zorn.