The Redskins' defense and running game have Donovan McNabb's back in the team's win at Philadelphia.

This week's Chain Reactions is all about winning, even if it is ugly. The Redskins held off the Eagles 17-12, and are now 2-0 in the NFC East after going 0-6 last year, which means they are a in first place in the division. The game was not filled with tons of offensive highlights, but in the NFC East it is not about style points.

Do the Redskins have room for improvement?  Yes. But if you can pick up wins while trying to pick up a new offensive and defensive system, you take 'em and make no apologies. I just hope not every division game will go down to the last second.

Meanwhile, Maryland football is off to a 4-1 after their 21-16 win over Duke. Congrats to the students for not rushing the field and tearing down the goal posts. Maybe someday beating the Blue Devils in football will be like beating them in basketball (just kidding!). Unfortunately Navy found out all streaks good or bad do eventually come to an end, as they fell to Air Force for the first time in eight years. 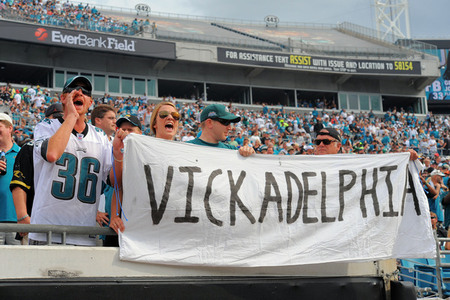 The Vet is rolling over in its grave

It was a classy showing by the Eagles fans to cheer Donovan McNabb when he was introduced. I was ready to call every Philly fan I know and call them soft, but then they booed once he came onto the field for offense the first time.  However, let's keep it real here. There is NO way in hell the fans that filled Veterans Stadium would have cheered McNabb in introductions. The 700 level would have thrown stuff for good measure.

It was an encouraging start by the Redskins defense, as they forced the Eagles to go 3 and out. Then, there was the big 53 yard punt return from Brandon Banks, and on the first three offensive drives, the Redskins had 23 plays for 189 yards, with 17 points, 69 rushing yards and 115 passing yards. If you missed those drives, sucks for you, because that was the end of the offensive show.

So that's the Shanahan Running Game

Clinton Portis ran hard (11-55 yards) and played tough until he could not go any further due to a groin injury, and Ryan Torian ran with a purpose, tallying 18 carries for 70 yards and the game's first touchdown (still trying to figure out why he was not on original roster). Running backs and offensive lineman needs repetitions to be successful, and on Sunday, Kyle Shanahan called more runs than he has all season. Give the offensive line lots of credit for physically manhandling the Eagles.

Well we got that Kolb/McNabb Matchup

Micahel Vick getting sandwiched by Kareem Mooreand DeAngelo Hall was the turning point of the game. The Eagles offense with Kevin Kolb looked like they did in the preseason ... inept. It's also worth noting it was Albert Haynesworth (yes the former Pro Bowler Albert Haynesworth) that flushed Vick from the pocket and drew the holding penalty. I'm sure Jim Haslett was the happiest guy in the stadium when it was announced Vick would not be returning. 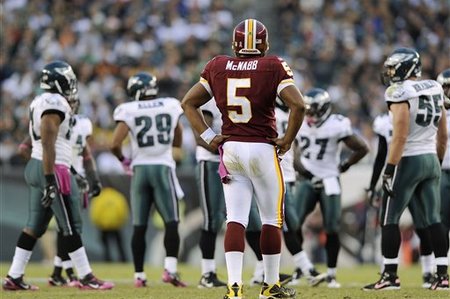 It was Personal for Donovan McNabb

After the fact, we learned Mike Shanahan asked the players this week to raise their hand if they had ever been fired.  McNabb was far from spectacular throwing the ball but he made plays -- the touchdown to Cooley, the bomb to Anthony Armstrong(beware of the snipers) and the big third down run (next time stay in bounds). He did get picked by rookie free safety Nate Allen (who was the 37th pick sent by the Redskins to Philly in the trade), but most importantly, he got a win.  McNabb finally did have a zinger for his former franchise and getting the game ball, saying "everyone makes mistakes and they made one last year."  Please watch this video.

Maybe we should chalk it up to a good day for the defensive backs on both teams, but where were Santana Moss, DeSean Jackson, and Jeremy Maclin? Moss touched the ball on the Reskins first offensive play on an end and around and had one catch for zero yards.  Carlos Rogers does need a hands transplant (dropped the game clinching interception), but he and DeAngelo Hall did a GREAT job on Jackson and Maclin. The pair combined for just four catches and 34 yards. After the game Rogers said McNabb told him and Hall to be physical with Eagles WRs and they wouldn't be the same. Good breakdown by the QB.

The battle of momentum killers

As frustrated as Redskin fans get with Stephon Heyer, keep in mind he is a backup and not a starter that signed a 6-year, $60 million contract. That would be the Eagles left tackle Jason Peters, to whom the Redskins should have given a game ball. Here's a great breakdown in the Philadelphia Daily News of the damage he caused.

On Peters' first penalty, Kolb hit Owen Schmitt for a first down inside the Redskins' 35 in the second quarter, the play negated. Peters wiped out a decent Kolb scramble from the Eagles' 39 in the third quarter, the drive that ended in a Shady McCoy fumble.

For the record Heyer did get flagged for holding once and doe two false start penalties, including one that took the Redskins from a 2nd and 3 to a 2 and 8 on their final drive before punting it back to the Eagles on a 4th and 4 (yes that hurts -- five yards would have meant a lot). Get well Trent Williams, and hurry.

After Further Review:  Why is Terry Bradshaw talking in a box?

I love how former Head of Officials Mike Pereira is ready at all times to defend the officials, but to his credit, when the crew blew the LeSean McCoy fumble on the field, he did call them on it. However, I wish he could have reviewed why FOX felt the need to bring Terry Bradshaw into the broadcast from FOX Los Angeles studios for a series. Did they feel like their "A" Team of Joe Buck and Troy Aikman needed help? Awkward! 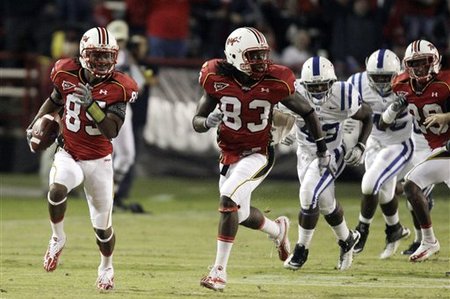 Maryland is in no danger of winning the ACC, but a 21-16 win over Duke is a nice start.  Sure they have not beaten any great or even good teams. However, they have handled inferior opponents the way you are supposed to, unlike Virginia Tech, and there's no shame in losing at West Virginia. Now, the Terps are just two wins away from being bowl eligible.

All good things must come to an end