The Day The Swagger Died: A Look Back At When Clinton Portis And Gilbert Arenas Ruled D.C.

Gilbert Arenas and Clinton Portis ushered in an entertaining era in Washington sports, capturing our attention with dazzling plays, memorable quotes and unshakable confidence. Now that they've both been unseated as the face of their respective franchises, its time to look back at their contributions to Washington.

Share All sharing options for: The Day The Swagger Died: A Look Back At When Clinton Portis And Gilbert Arenas Ruled D.C.

Oct. 5, 2010. If you're keeping score at home, that's the day the swagger officially died in Washington D.C.

It began with Clinton Portis' announcement that he would be out for this Sunday's game. The announcement finalized the transition of power. Ryan Torain was already beginning to take some of Portis' carries before his injury on Sunday, and now that he has the next 4-6 weeks to make a case to be the team's feature back, it's hard to see Portis going back to being a starter when he returns to the lineup.

Hours later, Gilbert Arenas also announced that his time as face of the franchise was officially over, as he passed the torch to John Wall:

This is the NBA. There's few players that stay in the same city, so right now the city is John's. I'm not here to fight anybody. I'm here to play alongside of him. He's Batman, I'm Robin.

The writing was on the wall (no pun intended) well before either of these transitions occurred, but the timing of Portis and Arenas' official exits from the forefront of the Washington sports scene brings a finality to the era they helped start back in 2003. 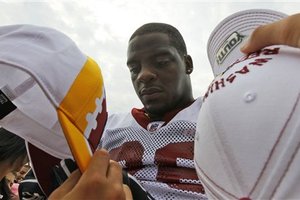 The two were brought into Washington within six months of each other. Arenas came to D.C. as a free agent in the summer of 2003, Portis came just a few months later as part of the Champ Bailey trade. Seven years later, their time as the faces of D.C. sports appears to be at an end.

Portis and Arenas' primes ran parallel with one another and during their peaks. They went through many of the same highs and lows. Unfortunately, both players had some of their best seasons cut short by injury. But when they were healthy, they made multiple All-Star appearances and were the driving forces behind several playoff runs, with each being part of a postseason victory.

But more than their accomplishments on the field, Portis and Arenas will forever be known for the swagger they exhibited on and off the field. Athletes are paid to be entertainers, and both of them made sure fans got high value for their dollar. Long after we forget about Gilbert Arenas' scoring outbursts, we'll still remember the way Agent Zero made the Wizards fun to watch again. Even after we forget which team Clinton Portis scored his first touchdown as a Redskin against first, we'll remember Southeast Jerome and Coach Janky Spanky. 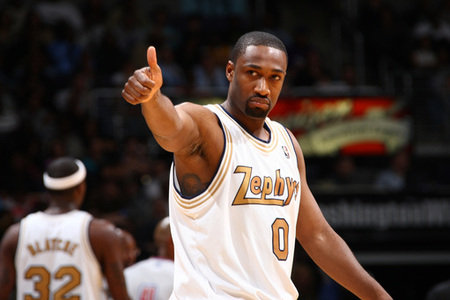 From a talent perspective, Portis and Arenas leave Washington in better hands than when they arrived. John Wall, Brian Orakpo, Alex Ovechkin and Stephen Strasburg appear poised to usher in a golden era of Washington D.C. sports over the next decade. Things are looking up, and it's safe to say that the city is in better shape than they were back in 2003.

But while those players will likely lead Washington D.C. to more success than either of them, they'll never bring the same type of swagger. So for that, let's give a toast to Gilbert Arenas and Clinton Portis. Their time as players isn't up yet, but their time as the faces of D.C. certainly is. Here's to the memories.