Is Ryan Torain The Answer At Running Back For The Redskins?

Folks, meet Ryan Torain. He may or may not be here to stay. Is he the next Quinton Ganther or is he Clinton Portis' heir apparent? Only time will tell.

Share All sharing options for: Is Ryan Torain The Answer At Running Back For The Redskins?

With Clinton Portis sidelined for at least the next 4-6 weeks, now would be the perfect time to lose all faith in the Washington Redskins running game. The Redskins are ranked 19th in rushing offense, averaging 98 yards a game on the ground with Portis in the backfield. Without him, how could things improve? Right?

That's essentially what they did last season. Once Portis and backup Ladell Betts went down with injuries, the Redskins abandoned the run. Now that Portis is gone again, how could things turn out any differently? Washington is already unbalanced in terms of their run-pass ratio, as they have thrown the ball 135 times to 92 rushing attempts. That's a 59.5-40.5 ratio in favor of the pass, and in Portis' absence, can Kyle Shanahan maintain any sense of balance when it comes to offensive playcalling?

There's no question the running game is a serious issue for the remainder of the season.

That said, Portis' replacement, Ryan Torain, might quash all concerns with a strong showing against Green Bay this Sunday in his first NFL start since 2008. 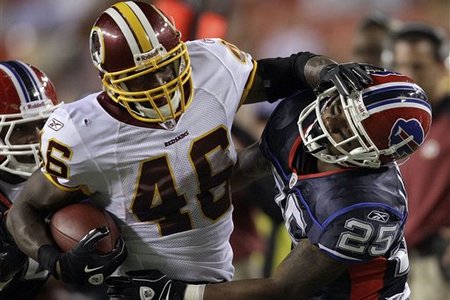 Torain is a virtual unknown around the league, and unless you watched him lower the boom on Eagles safety Quintin Mikell en route to a 12-yard touchdown run last week, you probably aren't very intrigued. After all, it's tough to get excited over a former fifth-round draft pick with an injury history and few accolades. However, Torain has impressed in limited action over the past few months and could prove to be the answer at running back for the rest of the year.

Historically, Mike Shanahan has been quite adept when it comes to discovering talent at the running back position. His zone blocking schemes breed success out of the backfield no matter who is carrying the load. Unheralded backs such as Mike Anderson, Olandis Gary and Mike Bell have all experienced huge days on the ground with Shanahan at the controls, so why can't Torain?

The new Redskins head coach brought the running back in for a reason over the offseason. In 2008, while he was still coaching the Broncos, Shanahan drafted Torain in hopes the Arizona State product would be his next great find at the running back position. While at ASU, Torain had a monster junior year in 2006 where he rushed for 1,229 yards (eight best in school history) to become the first Sun Devils' back to run for over 1,000 yards since 2001.

Heading into his senior season, Torain was considered to be one of the better prospects at running back for the 2008 draft. However, a foot injury sidelined him for the second half of 2007, lowering his draft status. For his collegiate career, Torain carried the ball 323 times for 1,782 yards and 12 touchdowns in 19 games. Impressive numbers to be sure, but the missed time due to injury really hurt his chances in the NFL. However, Shanahan selected him in 2008, hoping to see the player whose stunning debut his junior year turned so many heads.

In week nine of the 2008 season, Torain received his first carries. The following week, he drew his first start against the Cleveland Browns. In a quarter and a half of work, Torain had 68 yards and a touchdown on 12 carries. It appeared Torain was well on his way towards becoming another back to leave an imprint on Shanahan's sterling record when he tore his ACL in the second quarter of the Browns game.

Torain fell off the grid following the game. Shanahan was fired by the Broncos in 2009, and his young back sprained a knee while preparing for the season under new head coach Josh McDaniels. He sat out of football in 2009, but signed with the Redskins in April to reunite with Shanahan. 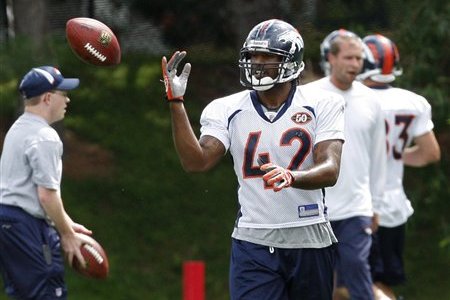 Expectations for Torain were obviously non-existent. Only the most knowledgeable Redskins fans knew his name and he was buried behind Portis, Larry Johnson and Willie Parker on the depth chart. Training camp was where he caught my eye with a nifty catch along the sidelines during 11-on-11's.

Longshots don't necessarily need to make memorable plays. In fact, Torain would have been better served by displaying special teams prowess or performing well in pass blocking, but instead he ran the ball with authority and hit the hole with a purpose you didn't see in Parker. In week one of the preseason, it was no different as Torain ran the ball 17 times for 62 yards, and also caught a pass for 22 yards as the Redskins beat the Bills 42-17. Adding a feather to his cap, Torain also helped spring Brandon Banks for a 77-yard punt return for a touchdown on special teams.

Torain was used sparingly following his solid game in week one, and he was not included on the final 53-man roster despite being the best pass catching option out of the backfield. A big reason for keeping him off the roster was his poor technique in pass protection, making him a non-option as the third down back. Yet he did clear waivers and joined the Redskins' practice squad as Keiland Williams assumed the number three running back position on the team.

Good things come to those who wait, and at the expense of an abysmal minus-10 yard carry by Johnson in week two against the Texans, Torain was called up form the practice squad. Johnson was cut, leaving Portis, Williams and Torain as the top three backs. After Portis inexplicably tackled himself the following week in St. Louis, it was Torain, not Williams, who saw some action against the Rams.

It was only seven carries, but Torain averaged 6.6 yards per attempt, leading to rumors that he would be platooning with Portis in last week's contest vs. the Eagles. Of course, Portis went down with an injury in the second half and the rest is history. Torain will start Sunday's game and carry the load for the rest of the season if he proves worthy. 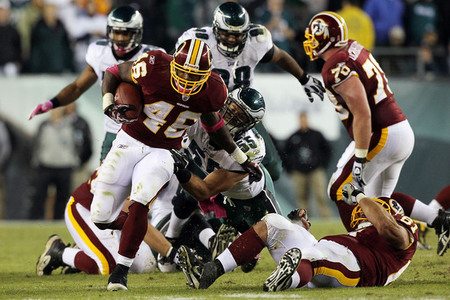 Can he withstand the pressure of filling Portis' shoes? Tough to say, considering Portis was the face of the franchise on and off the field for so many years. Since 2004, he was the all-around back many teams coveted. He was a fearless blocker, a tough runner and comedic off-field presence who could lighten the mood at Redskins Park. Torain has yet to demonstrate his ability to impersonate Bro Sweets, but it won't matter so much if he plays like Portis on Sundays.

Torain possesses an upright running style similar to that of former Shanahan back Mike Bell. He runs with power and breaks tackles well, but keeps his pad level too high, which leaves him susceptible to injury (hence the lower body injuries which have plagued him). He has decent straightline speed and is best when he hits his seams without hesitation. Lateral quickness isn't one of his better traits, but he has yet to learn that. Last week, he tried to extend plays east and west after they broke down in front of him and it cost him yardage. Twice he was stopped for negative yardage and lost more than he should have by retreating in an attempt to reach the edge. Torain doesn't have the athleticism to do that and once he gets more comfortable he'll eat the ball in those circumstances.

Tossing the scouting report aside, I'll follow my own instincts and predict the kid has a great chance to be a contributor in the Redskins rushing attack this year. Torain has the mean streak to be a legitimate back for 2010 and hopefully injuries don't derail his efforts. Beyond that it's tough to say he has the raw skills to be a long-term number one ball-carrier. He could be the next Quinton Ganther in a revolving door of scrubs; another guy keeping the seat warm for Portis.

Yet for at least this season the Redskins are desperate for a running game, and their lack of personnel at the position has made it possible for Torain to prove he is the future at tailback in Washington. 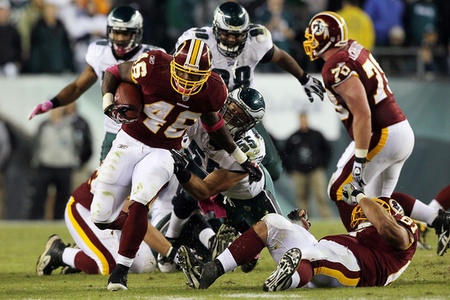