The Redskins defense is better than their 31st overall ranking indicates, featuring potential Pro Bowlers and one guy who could be the Defensive Player of the Year. But with many familiar faces, it's Jim Haslett who is making the biggest difference.

While the Redskins offense has yet to emerge as consistent unit, it's the defense that continues to keep this team afloat week in and week out. Jim Haslett's guys may be ranked 31st in overall defense, but the numbers don't even begin to tell the story. The Redskins have sacrificed some extra yards and their usual top-ten defensive ranking in favor of an aggressive, turnover-creating machine, featuring the rejuvenated LaRon Landry and the DeAngelo Hall we were all hoping to see last year when he signed a $56 million deal.

The success of Landry and Hall is just a small glimpse at how well Haslett has catered his schemes to his personnel. He has played to the strengths of each of his players and the confidence each guy has discovered has made this one of the hardest-hitting defenses in the NFL. While former coordinator Greg Blache refused to alter his gameplans for the sake of his players, Haslett has bent over backwards to ensure the entire defense is put in a position to succeed.

The current swagger on defense has made Haslett's unit exciting, but also a group that no opposing offense wants to deal with as the midseason grades will indicate. 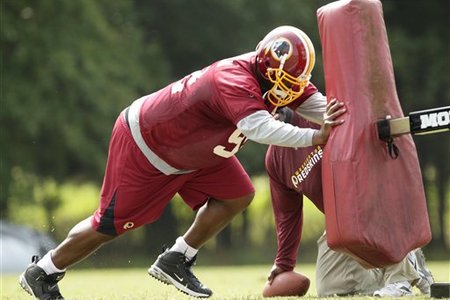 Defensive Line: Probably the weakest link, but with the resurgence of Albert Haynesworth, the line will improve down the stretch. Haynesworth has really adapted well to a scheme in which he initially refused to play. Haslett has gone out of his way to include calls that play to Big Al's skill set, and the cooperation between the two has once again made Haynesworth a presence on the line.

However, the lack of a consistent nose tackle has been a huge problem for the Redskins. Haslett admitted no 3-4 defense will live up to its potential if the nose tackle can't control the line of scrimmage. Ma'ake Kemoeatu still hasn't fully recovered the torn Achilles he suffered last year, and Haynesworth has split time between NT and defensive end.

Phillip Daniels is having a strong season in limited action, particularly in goal line work, while Adam Carriker has proven to be a solid acquisition at DE. Andre Carter has seen increased snaps at DE, where he is more natural.

Despite some strong individual play, the line as a whole has been mediocre at controlling the line of scrimmage and filling gaps. The Redskins rank 21st against the run and give up 4.6 yards per rushing attempt. The defensive line has just 10 tackles for a loss, and half of those belong to Haynesworth. They have also surrendered first downs on 23.1 percent of the rushing attempts by opposing teams, which puts them in the bottom ten in the NFL. 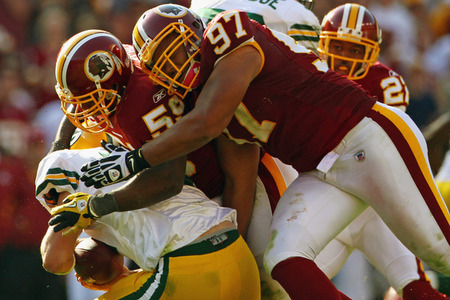 Linebackers: Haslett has done a masterful job in moving Lorenzo Alexander to outside linebacer and Rocky McIntosh to the inside linebacker position. Both players have been reliable and Alexander has made the OLB a strength when many saw the position as a weakness coming into the year.

Both McIntosh and London Fletcher have been tremendous run pluggers, as they have combined for 135 tackles, 3.5 sacks, and three forced fumbles. Fletcher's leadership abilities are difficult to factor in, but his presence raises the level of play across the defense.

And of course, you can't forget the play of Brian Orakpo. The second-year pro isn't experiencing much of a sophomore slump, as he has seven sacks, putting him on pace to surpass his rookie total of 11. Orakpo has also made a living off of being held this year. Some may be skeptical when they hear Redskin fans complaining about Orakpo being held, but they have a valid point. Orakpo has drawn seven holding penalties on the year, including the infamous Alex Barron infraction, which spelled the beginning of the end for the Wade Phillips era in Dallas.

The linebackers have racked up 13 of 18 sacks the defense has accumulated this season. In a 3-4, the LBs are expected to be the ones applying pressure so mission accomplished. Alexander has been better than expected in coverage and the other are playing their roles nicely. You would like to see a little more explosion and lateral speed, but in their first year playing with a new defense full of exotic looks, the LBs have met expectations. 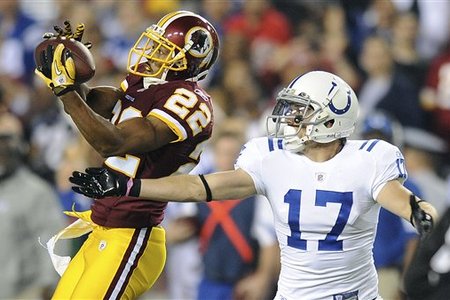 Secondary: I have an interesting love-hate relationship with the Redskins' secondary. For as many receptions as Hall gives up, he has made some key plays on defense in 2010, including a pair of touchdowns to fuel a pair of Redskins victories. Not many defensive players have that kind of impact. His tackling has improved immensely and you can't say enough about his recent interception spree. I like him for now, but you never know what to expect when he gives 10 yards of cushion on a 3rd and 7. I know he's playing the scheme, but please, for love of all that is holy, play more like Carlos Rogers in coverage.

While Rogers is a more consistent cover man, he should take a cue from Hall and learn how to catch the ball when an opposing quarterback throws it his way. Much has been made of Rogers' stone hands, but the guy cares about football again after he lost focus under Blache last season. Phillip Buchanon is another solid corner who has made his mistakes (leaving Reed Doughty alone with Andre Johnson), but also some key plays (two big passes defended against Peyton Manning late in the fourth with the Redskins trailing).

As for the safeties, Kareem Moore was the up-and-coming player through training camp due to his ball skills, but he quickly proved he doesn't like tackling very much and has dropped several interceptions in critical situations. Now, I saw Moore make some tremendous interceptions in training camp, and once he gets on a roll he'll be responsible for plenty of turnovers, but thus far he's been a little disappointing.

The MVP of this team has been Landry. Landry has set the tone defensively and leads the team in tackles. He set up a huge Redskins win over Green Bay in overtime with an interception, and has done whatever the coaching staff has asked of him.

He played back in coverage in Philly to protect against DeSean Jackson and Jeremy Maclin, but he's made his living as a rover at the line of scrimmage, freelancing to stop the run, pressure the quarterback or wreak havoc on receivers over the middle. Haslett's best move may have been giving Landry the opportunity to lower his helmet and simply play the game at his own pace with no restrictions. That's all Landry has ever wanted, and the newfound freedom has showered confidence on a young player reeking with talent. So far, Landry has been the cause of mayhem over the middle, in the trenches, and anywhere else Dirty 30 has had a mind to venture. He's finally living up to his potential; much like the rest of this defense. 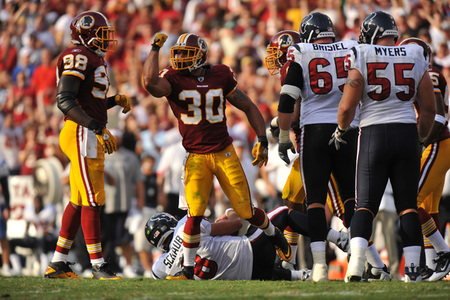