Donovan McNabb is no stranger to controversy. Will McNabb put on a show for the prime time audience? Or will he make Redskins fans continue to think twice about his future with the Burgundy and Gold?

Share All sharing options for: Donovan McNabb Looks To Silence The Critics Once Again On Monday Night

With the focus solely on Donovan McNabb at Redskins Park this past week after Mike Shanahan benched him against the Lions, the pressure is on the beleaguered Redskins quarterback to orchestrate a bounce-back performance against his former team, the Philadelphia Eagles, on prime time.

All eyes will be on McNabb, just days after Shanahan threw him under the bus, saying the quarterback he traded away multiple draft picks to acquire did not grasp the offense. McNabb has experienced enough drama and adversity throughout his career to shake off the criticism, but given the circumstances, he could be treading on thin ice. McNabb has played about a game and a half of good football this season, and he's seemingly getting mighty close to end of his chain, considering what happened on Halloween.

However, a win on Monday night will put a hold on the negativity, and a strong showing from McNabb to go along with a victory could just quash it altogether. The regular season is a week-to-week endeavor, and no one knows that more than McNabb. He's had a couple weeks in the doghouse, but all will be forgiven if the Redskins beat the Eagles.

The Redskins are still well within reach of a postseason berth, and a win against Philly would give them a season sweep of the Eagles and a sparkling 3-0 division record. If McNabb can work his magic on national television, Washington will be sitting pretty in the NFC's playoff picture. 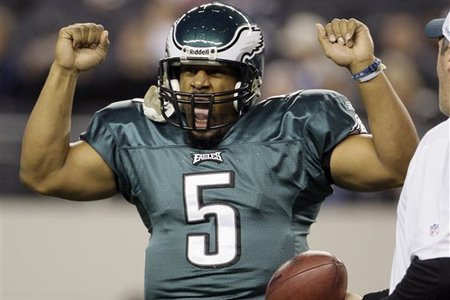 The last time McNabb had a chip on his shoulder, he played pretty darn well. Coming off an 8-18, 59-yard, 2 interception game against the Ravens in which he was benched, McNabb led the Eagles to 48 points in a win over the Arizona Cardinals in 2008. His stat line for that game? 27-39, 260 yards and four touchdown passes. The Eagles would go 4-1 after McNabb came back from the Baltimore game, qualify for the playoffs, and win a pair of postseason match-ups before falling to the Cardinals in the NFC Championship game.

McNabb threw nine touchdowns and one interception over that five game stretch. His QB rating over that span was 101.2, as Philadelphia scored 30+ points in three of those games. In short, McNabb was unreal and the team played arguably it's best football since 2004.

This is a different situation considering McNabb is new in town and his relationship with Shanahan is nothing like the one he had with longtime Eagles coach Andy Reid. This time around, McNabb will be looking to get the monkey off his back with Reid across the field. Instead of Brian Westbrook, McNabb could have Keiland Williams next to him and an offensive line that has allowed him to get sacked 22 times already this year. To put that into perspective, McNabb was sacked 23 times for the entirety of the 2008 season.

I've said it before and I'll say it again: McNabb can only be as good as his offensive line allows him to be. Considering the questionable status of both Ryan Torain and Clinton Portis, he's on his own for this one. The intangibles are there. Please don't tell me McNabb is going to lay an egg in a game of this magnitude. The question is: how much help will he receive? 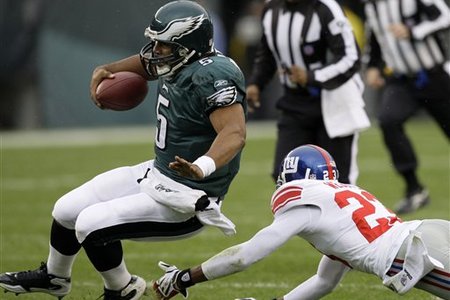 McNabb is an experienced football player who's been in numerous tight spots. He has made a living defying the odds and now has a prime opportunity to do it again. He may not feel at ease in this offensive scheme, but when push comes to shove, he is a guy who is known for making a statement with his play whenever critics venture out of the woodwork. We haven't seen the playmaking side of McNabb often, but Monday night will be the biggest game in his brief tenure with the Redskins. If he can establish a rhythm early and simply play football with that backyard mentality we witnessed in Philly for all those years, he'll come out on top. McNabb has proved time and again he's one resilient son-of-a-gun and the rest of the team has taken part in that resilience. They are still behind him and a strong start this week will quickly erase the bitter memories from Detroit.

We all knew this game was going to be big. It marks the second time McNabb will suit up against his former team and it's also a game between two divisional rivals trying to keep pace with the Giants in the NFC East. After Shanahan tipped his hand regarding his displeasure towards McNabb's play, the stakes got that much higher. McNabb has to play a positive role on Monday or the media circus will carry on and Shanahan will have to brush up on his damage control tactics behind the podium.

So amidst all the posturing and buzz this debacle of a situation has caused, it all comes down to four quarters of football at FedEx Field, which could very well tell the story of the 2010 Washington Redskins. You can bet I'll be watching.