Chain Reactions: How The Washington Redskins Can Ground The Philadelphia Eagles

The Redskins offense needs to come through on the NFL's biggest stage tonight and show they can adjust and move past all the drama.

Share All sharing options for: Chain Reactions: How The Washington Redskins Can Ground The Philadelphia Eagles

The game between the Philadelphia Eagles and the Washington Redskins on Monday night got even bigger thanks to the Dallas Cowboys finally showing up and beating up the New York Giants  33-20 in New Jersey yesterday. (By the way let's hope they can get those power issues figured out before the Super Bowl comes to East Rutherford, NJ, in 2014). Now, a Redskins win would tonight would pull them a game back of the Giants at 5-4, and they would own the tie breaker over the Eagles with the season sweep. In other words, the Redskins NEED this game much more than Philly.

However, the big question is whether they be able to put the drama from the past two weeks aside and show it on the field. Here are a few keys to making it happen.

End the Drama and Adjust

You have to believe during the bye week adjustments were made to help the offensive line and the guy they are supposed to be protecting (assuming they had time between all those calls to ESPN). Why not go to shorter drops for Donovan McNabb or allow him to read short-to-deep in progressions instead of deep-to-short? Clearly, what they are doing is not working. Hopefully the meeting with McNabb and Kyle Shanahan will jump start the offense.

Run the Ball and then run it again and again...

In April, at McNabb's introductory press conference, the quarterback talked about finally playing on an offense that would have a running game. The irony is the Redskins rank just 24th in the NFL in rushing, while his old team, the Eagles, rank sixth. Ryan Torain is back tonight and it would probably be wise to get him the ball at 20-25 times. This would help the play action and would also help keep No. 5 from taking the kind of hits he has been taking in the first eight games of the season. The bottom line is that if you don't protect the quarterback, you will not be successful, and this offensive line is not going to be confused with the Hogs anytime soon. So you must run to keep the defense off balance. Also, on the protection front, this offense could use a healthy Clinton Portis. 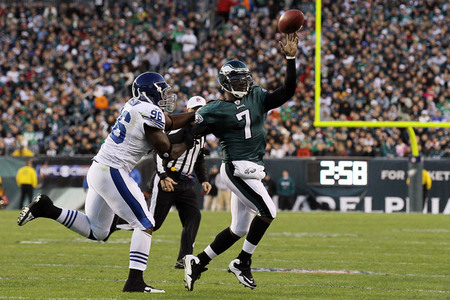 Keep Michael Vick on the Sideline

Controlling the ball and the clock would keep Michael Vick and the explosive Eagles offense on the sidelines.  However, in order to do that, the Redskins must avoid the three and outs, which are a staple of their offense. They also need to actually cash in with touchdowns instead of field goals when they get into the red zone.

Spy on Vick when he is on the Field

Jim Haslett's defense never had a chance to really show off their game plan for Vick in Philly. The Redskins' defense knocked him out instead. But we have to assume Vick will play the whole game this time. Assuming Vick goes four quarters, it is probably a safe bet that Laron Landry will spend a good part of the night spying on Vick. If they don't keep a close eye on Vick, he could run wild, which would make for a long night for the Redskins.

NO Action for DeSean Jackson

The big-play wide receiver was practically invisible (3 catches, 19 yards) when these two teams met earlier this year because DeAngelo Hall and Carlos Rogers got physical with him at the line of scrimmage. They will need to have the same approach this time around. That will force Vick to check down to his running backs and tight end.

Big Albert needs to Play like a $100 Million Man

Ok maybe not the full $100 million, but a $6 million man will work Monday night. He just needs to continue to build off the big performances of late. Here is what Scout Inc's Gary Horton had to say about Albert's impact.

Even though Washington is still playing a 3-4 front they are moving Haynesworth around, both at DE and in the A-gap at times between the OC and OG. As a result, he is allowed to penetrate and attack gaps, instead of playing two-gap techniques, where he must read and react. He is still a part time player, and that keeps him fresh. He can be a disruptive force versus the inside run and his job in this game is to get intol Vick's face and make him uncomfortable or throw on the run. 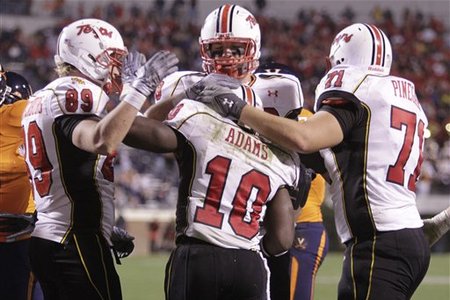 Maryland Gets Ready for Prime Time Too

Maryland treated Virginia the way a conference contender should with a 42-23 win in Charlottesville. The Terps are guaranteed a winning regular season and at least a .500 record in the conference, and they control their ACC Title hopes with two games left (both at home). The first hurdle will come Saturday night in Prime Time on ABC when they host the Florida State Seminoles.

ACC Coach of the Year to Unemployed?

Could the ACC Coach of the Year also be a guy that may not be welcome back the following season? That could be the scenerio playing out soon, because Ralph Friedgen should be the coach of the year in the ACC for being in contention with two games to go. Meanwhile, the Washington Post reports new athletic director Kevin Anderson remains noncommittal about Friedgen's return.

The Fridge has gotten more out of his team this year than any other coach in the ACC. Yes, even Frank Beamer (you lost to JMU) and Butch Davis (can't reward a coach that has still not been cleared by NCAA for off-field issues).  Did we mention the team had no expectations coming into the season outside of the program (picked last in the preseason), and yet they are still on the road to Charlotte with two games to go with a a redshirt freshman quarterback under center.

Navy locked up an 8th straight winning season as they held off Central Michigan 38-37.  The seven straigh winning seasons is the most since it won the 10 in a row from 1952 to 1961 and the third-longest such streak in program history. It's really impressive what Paul Johnson started and Ken Niumatalolo has continued.