As Michael Vick Steals the Show, All The Redskins Can Do is Marvel

On a night which was all about Donovan McNabb, Michael Vick overshadowed him with a six touchdown effort. Afterwards, the Redskins went overboard praising the guy.

Share All sharing options for: As Michael Vick Steals the Show, All The Redskins Can Do is Marvel

If you happened to tune into Monday Night Football last night (and chances are you did if you're reading this column), you witnessed a historic performance of epic proportions. No, I'm not referring to the MNF record 59 points scored by the Philadelphia Eagles, or the franchise-record 45 first-half points they dropped on the Washington Redskins. Nor am I speaking of the worst defensive game by the Burgundy and Gold since 1954, or the fact that they surrendered nearly 600 yards of offense.

All of those numbers are quite staggering, but the most impressive set of digits I could throw at you would be the stat line of one Michael Vick. The Eagles quarterback went 20-28, for 333 yards and four touchdown passes, plus 80 yards and two touchdowns on the ground. According to Bill Simmons, Vick had 52 fantasy points on the night, likely leading to quite a few miraculous comebacks across fantasy land.

Fantasy football aside, Vick was dazzling, as he amassed 413 yards of offense and accounted for six of Philadelphia's touchdowns. If you were laughing at the hype surrounding Vick as an MVP candidate last week, you no longer have anything to say. He silenced the critics as they turned instead on Donovan McNabb and his newly minted five-year, $78 million deal.

Vick had to smile when he was asked if this was the greatest game he had ever played. "I've had some great games in my day," he said, "but I don't think I've had one quite like this."

"He was tremendous," Maclin said. "He played another excellent game and showed the world again why he is still one of the premier quarterbacks in the league and still has the talent that he always had."

McNabb, who mentored Vick last season in Philly, couldn't deny his protégé had raised his level of play.

"I'm just happy for him," McNabb said. "Not by his performance today. I told him I was pissed off at him. I'm just happy at the way he has continued to progress and have confidence in himself and stay humble. That's the most important thing. Good things can happen for him." 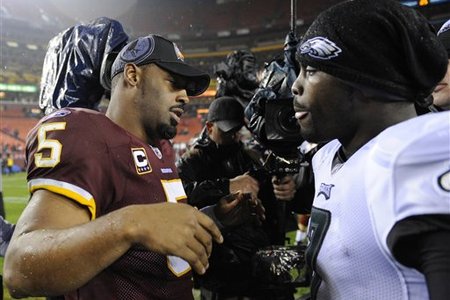 Uh, Donovan I'd say good things are already happening. On Monday night, Vick became the first player to ever throw for three touchdowns and rush for two more in one half of play. His 88- and 48-yard touchdown passes to Jackson and Maclin were gorgeous throws to which Washington's secondary had no answer. LaRon Landry, after setting off some pregame fireworks, was helpless to stop Jackson as he scored on the first play from scrimmage. Jackson may have gotten open on the play, but it was Vick who rolled to his right, bought time, and unleashed a perfect throw to jumpstart one of the finest offensive performances in recent NFL history.

"There aren't too many guys that can throw the ball, I am not sure how far it was in the air, 65 yards," Mike Shanahan said. "Very few guys can buy that time and take the ball downfield like that. It was a great play on their part both as a quarterback and a receiver."

But Shanahan wasn't done. "Big credit to Michael Vick, he made some plays that I haven't seen a lot of quarterbacks make for a long time," he said. "When something wasn't there in the passing game, he made plays with his legs. He had a really big time game."

We've heard all about Vick's potential and athletic ability for years. This year it looks like he's finally put it all together as he's playing the best football of his career. The scary thing is: he keeps improving. So effortless was each big play, that Vick transformed FedEx Field into his own personal game of Madden ‘11. However, he told reporters this whole football thing isn't a walk in the park.

"I don't premeditate what I'm going to do," he said. "There's a lot that you have to process within about a second so it's tougher than what it looks. It may look easy from the outside, but it's definitely hard."

Forgive me if I'm skeptical of that statement, but it seemed pretty darn easy for Vick on Monday night. In addition to his early touchdown passes, he pulled off a nifty seven-yard touchdown run in the first quarter where he left Lorenzo Alexander grasping at air. Alexander has made a name for himself with his transition from all-purpose defensive lineman to outside linebacker and also for his weekly bone-jarring hits on special teams (just ask Jorrick Calvin), but he was no match for Vick on that play.

"He's become a great passer in the pocket, and when things breaks down he's able to get out like he's always been doing in his whole career," Alexander said. "So it's kind of hard to gameplan for a guy [like] that because you ain't going to see anybody else like that in the league."

With a productive Vick, Philadelphia might boast the most lethal signal caller in the NFL. It's such a rarity to possess an athletic quarterback with an accurate arm. In six games this year, Vick has completed 62.7 percent of his passes, easily the best mark of his career. Add to that his ability to move the pocket at will, and the Eagles have to like their chances down the stretch.

Might I remind you the Redskins passed on him before the 2009 season began, but of course so did most teams following his stint in prison. The Eagles took a chance on a guy who looked finished in Atlanta and it's paid off in spades. 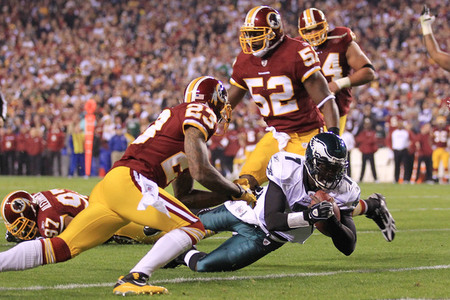 Several other Redskin players couldn't help but praise Vick for the player he has become. I realize the NFL is PC and players seldom say anything negative regarding opponents, but the superlatives flew early and often from the Redskins locker room when the players mentioned Vick.

"I played against him a lot when I was in St. Louis and he is a much better player than he was then, much better quarterback," London Fletcher said. "Before he couldn't make those throws. He couldn't do the things in the pocket that he can do [now]. He could always run, but now nobody else has a weapon like him in the National Football League."

Brian Orakpo managed to split a sack with Andre Carter on Vick, but was amazed at his ability to escape pressure.

"They've got themselves a playmaker in Philly because this guy, he's a dual-threat guy," Orakpo said. "He is throwing the ball very well and he's making plays happen on his feet and that's something that wears a defense down when you continue chasing this guy all around the field so hats off to them man. Number seven, he really won this game for them."