The Media Got The Donovan McNabb Contract Situation All Wrong

Remember when all those media members said Donovan McNabb would never re-sign with the Washington Redskins? Where's the accountability now that he has a new contract?

Share All sharing options for: The Media Got The Donovan McNabb Contract Situation All Wrong

On days like this, I completely understand why so many fans of the Washington Redskins despise the media. We now live in a world where anyone and everyone with a keyboard or microphone in front of them say or write anything that pops into their head with absolutely zero accountability.

That was clearly evident when Washington Redskins head coach Mike Shanahan opted to bench quarterback Donovan McNabb in the deciding moments of a winnable game against the Detroit Lions two weeks ago. Once the media sensed blood in the water, countless writers, yodelers and talking heads did their best to pile on, igniting a firestorm that culminated with Shanahan being labeled everything from egotistical to a racist.

As soon as the herd was done slamming Shanahan for the decision to willingly insert backup Rex Grossman into the deciding moments of a football game, the topic inevitably turned to the future of Shanahan, McNabb and the franchise, in general. That’s when the "experts" stepped up their game with definitive statement after definitive statement about how one questionable decision in the heat of the battle had no doubt doomed the Redskins for years to come and ensured a messy divorce was on the horizon.

"I don’t believe for a second that Donovan McNabb is going to be here now," said Michael Wilbon on The Tony Kornheiser Show. "Not for a second. Done. First of all, the Arizona Cardinals, where he lives, need him too much. Or Minnesota. Or the Chicago Bears, where he lives."

Wilbon went on to say, "This is what has always plagued the Redskins – ego and arrogance."

This, mind you, is coming from a guy who openly admits he’s pals with McNabb. They’re neighbors in Arizona and have a long-standing friendship, so it wouldn’t be unreasonable to think that when Wilbon speaks on the subject, he’s got more of an insider’s perspective than most.

But don’t think for a second that Wilbon was alone.

"Donovan McNabb is never going to re-sign here," said David Aldridge during the same show. "That’s over. You have now wasted two more draft picks on somebody that’s not going to be here."

It was more of the same on the national stage, as the "worldwide leader in sports" happily trotted out an onslaught of so-called NFL experts to also shed light on the situation at Redskins Park.

"Personally I just think that Mike Shanahan was acting in the moment, and in a moment of anger, because this soup has been simmering for a while," said ESPN’s Chris Mortensen. "It's almost the worst-kept secret in the league, as far as I'm concerned. There's been no enamorement with Donovan McNabb going back to the summer, and then as you went into the season you kept hearing that Mike Shanahan and Kyle Shanahan – his son and the offensive coordinator of the Redskins – had not been happy with the way Donovan practices."

And just for the hell of it, here’s one more quote on the subject:

"If you don't want Donovan McNabb to be your quarterback, you have to say that," said Tom Jackson, also of ESPN. "The message sent across is I don't want you to be my quarterback, I have another guy in mind, whenever I can find that guy. What this has done, though, for the rest of this year – because we're still in this season – you have now, to some extent, fractured probably forever your relationship with the quarterback and your relationship therefore with the locker room." 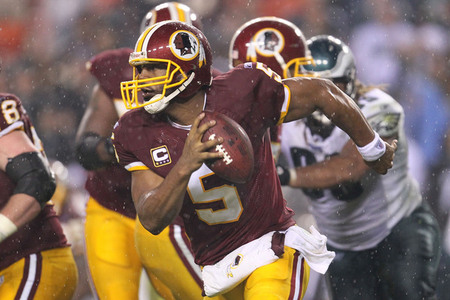 In related news, the Redskins and McNabb agreed on a five-year, $78-million contract extension Monday, with the 33-year-old taking home $41 million guaranteed.

UPDATE: It's actually $3.75 million guaranteed if the Redskins decide to cut him after the season, as first reported today.

Oh wait, that’s not related at all. In fact, some would even suggest that this news directly contradicts everything each of these well-respected media members said. To borrow a phrase from Wilbon – I’m not surprised. If no one ever holds these guys accountable, then what’s to stop them from continuing to babble on senseless rhetoric?

It’s one thing to say "If I were McNabb, there’s no way I’d re-sign in Washington," but that’s not what any of these guys said. And look, Wilbon, Aldridge, Mortensen and Jackson were far from the only media guys to look completely foolish here. They’re just a few examples I’ve chosen to illustrate that we’re now stuck in a world where our sports coverage is delivered to us by drama queens.

Here’s the kicker – Aldridge, of all people, should have known better. He had McNabb on his TBD radio show and asked him about whether or not re-signing with the Redskins was an option.

"I'll be here in D.C.," McNabb said to Aldridge when asked about his contract situation. "I'll be here. I look to be here for the next couple years and continue to grow with these guys, and be able to bring some consistency and some excitement to the D.C. area."

Of course, that’s when the "experts" chimed in again with "Well of course he’s going to say that now. What else would you expect from him during the season?"

Okay, fine. If McNabb’s words can’t be trusted during the season, then let’s turn to Redskins general manager Bruce Allen.

"He's a mature player who knows that he's gonna be paid well, but there'll be a right time," he said, way back in July. "We made a great investment in trading for him and we like the guy, we really like him as a leader on this team, and the players have really accepted him. And we think he's gonna be a great Redskin for years to come."

For months, McNabb and his agent repeatedly said they wanted to be here and you’ve got Redskins management also saying all along that they have every intention of ensuring McNabb retires in Washington, but still the media couldn’t take the hint.

Sure, there was smoke. But there couldn’t have been fire here. Not unless we’re talking about Shanahan burning a bridge between himself and his locker room by disrespecting McNabb, right?

But what everyone forgot, or chose to ignore, is that McNabb really, truly and honestly wants to be here. Even though he just inked a contract for five more seasons, he’s already planning for life after football and knows that he can make a difference with his charity works, etc. in our nation’s capital.

From a Redskins perspective, McNabb still represents the best quarterback the franchise has had in 20 years. He hasn’t been as good as advertised in 2010, but he’s still a whole lot better than most other options that would be available to the Redskins this offseason. Unless Shanahan fired McNabb just to send some sort of vindictive message, this was the only possible outcome since day one.

Some of us were smart enough to know that, but unfortunately, not everyone got the memo. Here’s hoping the next time controversy finds its way to Redskins Park, media members take an extra second to compose their thoughts rather than once again overreacting like a bunch of drama queens.