In light of Donovan McNabb's benching Sunday, has Mike Shanahan conceded he made a mistake in acquiring him? One thing's for sure; this move will have serious implications on the rest of the Redskins season.

Share All sharing options for: Mike Shanahan's Decision To Bench Donovan McNabb Will Have Lasting Implications

In recent weeks, much has been made regarding the prospects of Donovan McNabb signing a long-term deal with the Redskins. For much of the offseason, the consensus was that the question wasn't whether McNabb would remain a Redskin beyond 2010, it was simply a matter of when he would sign.

Halfway through the season, these talks will be put on the backburner after McNabb was benched at the end of Sunday's 37-25 loss to the Detroit Lions. For whatever reason, Mike Shanahan decided his quarterback wasn't cutting it and picked Rex Grossman as the latest sacrificial lamb behind a porous offensive line.

Shanahan hasn't been shy when expressing his dislike for certain players. Like him or hate him, Albert Haynesworth is a difference maker, yet Shanahan has found ways to escalate that saga at times. Devin Thomas was run out of town for no apparent reason, despite possessing more talent than several receivers on the roster. Derrick Dockery hasn't dressed for the past three games and he might be the team's best interior lineman. However, since he doesn't fit the zone blocking scheme, the inferior Kory Lichtensteiger has been playing in his stead and with disastrous results.

Keeping this in mind, Shanahan's move to bench McNabb yesterday is another telling sign that the coaching staff simply doesn't believe in McNabb after giving up a pair of draft picks to acquire him this offseason. There's little doubt McNabb gives Washington the best chance to win, but the coaching staff has made it clear they are displeased with his performance. Shanahan has dropped hints all year about McNabb‘s inability to learn the offense. Add in his costly late game interception on Sunday, and there are serious questions as to the team's faith in McNabb as the starter. 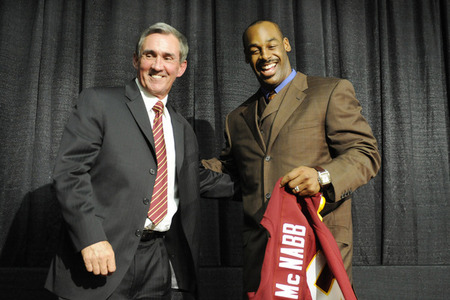 As good as Shanahan is for the Redskins, he is flirting with pulling the plug on the 2010 season. Benching McNabb is going to put a damper on the positive vibes recently emanating from the locker room and players are already questioning the move. A loss to the Lions has derailed an entire Redskins season before, and it could do it again.

Maybe Shanahan was just trying to win a game he felt had gotten away from his quarterback. But the move to Grossman will be analyzed ad nauseum for the next two weeks. McNabb might not miss another snap, but the prospect that he that he could will drum up talk of controversy.

Shanahan has created a monster he never should have by bringing in Grossman. The Redskins are playoff contenders in a weak NFC and McNabb is the only option if Washington wants to secure a berth in postseason play. It's too early to pull the plug on him since there is no question he remains the team's best option at quarterback. 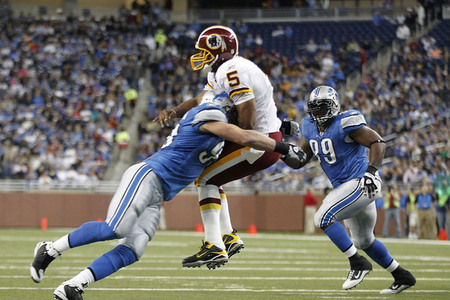 I don't want to wholly exonerate McNabb because he has thrown some terrible interceptions and failed to establish any sort of rhythm offensively. But some of those issues on offense have nothing to do with McNabb.

First, the offensive line is a disaster. The protection for McNabb is awful and I can't remember seeing so many untimely penalties. The Redskins opened four of 16 drives against Detroit by losing yardage via sack or penalty courtesy of the boys up front. McNabb was sacked five times and spent most of the day getting hit or running for his life.

And the play calling did nothing to alleviate the pressure. McNabb rarely rolled out to move the pocket, and the run game was not used. In addition, the coaching staff continues to insist upon putting Joey Galloway on the field. Galloway has two catches in the past three games and nine on the season, yet he continues to see the field. He's not an asset, but for some reason he's in there.

The Redskins offense as a whole isn't getting the job done and I I won't deny that a good chunk of the ineptitude falls on McNabb's shoulders. He has failed to orchestrate scoring drives in key situations as the offense has leaned heavily on the strong play of Jim Haslett's defense. It's strange, but while Haslett continues to tailor his schemes according to his personnel, Kyle Shanahan has lacked that flexibility on offense.

Nonetheless, McNabb needs to elevate his game and fast if he wants to be able to re-up with the Redskins after the season is over. Like this team, he is resilient and has bounced back countless times over his career. Let's not forget, the last time McNabb was benched, he came back to lead Philadelphia to the 2008 NFC Championship game. He's a classy guy who won't vocalize his displeasure over Sunday' proceedings, but you can bet his encounter with the pine will only motivate him even more to succeed down the stretch this season.

The move to bench McNabb will have serious implications on the rest of the season. How will the team respond? Will the Redskins blow up and quit like in 2009 or will they rally around McNabb and continue to push for a playoff spot? The results over the next eight games will prove that Shanahan is either a master motivator or a pompous individual overly impressed by his own decision-making. 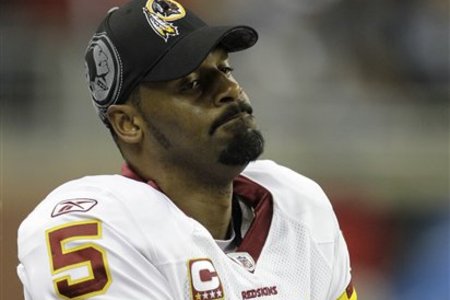