Chain Reactions: The Washington Redskins Get A Gut-Check Win

In the week-to-week world of the NFL, the shorthanded Washington Redskins were winners in the ultimate "gut check" game in Tennessee.

Share All sharing options for: Chain Reactions: The Washington Redskins Get A Gut-Check Win

To steal a phrase from NASCAR Owner Joe Gibbs, the Redskins "Fought Their Guts Out" on Sunday in working overtime for the third time this year to beat the Tennessee Titans 19-16. They came to Tennessee shorthanded without Laron Landry, Carlos Rogers, Ryan Torain and Artis Hicks. They were also coming off an embarrassing loss on national TV after giving up 59 points to the Eagles, and they had a short work week.

To add to the degree of difficulty, they lost Chad Simpson in pregame warm ups. Then, safety  Anderson Russell and linebacker Lorenzo Alexander went down on the Titans' punt return for a touchdown. After a strong start Clinton Portis re-aggravated his groin injury, then Center Casey Rabach went down with a knee injury. Offensive lineman Derrick Dockery finally got on the field again ... and then he was lost with a knee injury. Finally, the defense lost linebacker Rocky McIntosh to an injury of his own. Despite all that, they got the victory.

It was not a pretty or easy win for the Redskins, much like their previous four wins, but it still goes in the "W" column. The Redskins are back to .500 at 5-5, ending a two-game losing streak.

The Redskins never do anything easy. Here was the start to Sunday's game: lose a player in warmups (Simpson).  see Donovan McNabb fall down coming out from under center on first play from scrimmage and eventually get a 3 and out. Then, after failing to capitalize on a Vince Young fumble, the Redskins punt and have a breakdown -- literally -- as two players are injured on a Marc Mariani 87-yard punt return for a touchdown.

The Redskins came into Sunday's game as the worst in the NFL at third-down conversions. In fact, at 21.6 percent, they were the worst third-down team since 1991, when they started tracking the numbers. But on Sunday, it was a different story. The Redskins converted eight of 16 3rd downs after a four-of 37-funk in three previous games. But before we say the problem solved, keep in mind this stat from the Tennessean on the Titans third-down defense.

Titans have allowed teams to convert 31-of-53 third downs (58.5 percent) over the past three weeks. Tennessee is the eighth-worst team in the league at stopping opponents on third downs.

Patchwork Offense Line Gets it Done

The offensive line shuffled once when Casey Rabach went out, then it got shuffled again when Dockery went down. However, they gave McNabb enough time to pass on most drop-backs, and when they didn't, McNabb used his mobility and strength to keep plays alive. They also ran the ball enough to keep the Titans off balanced. Keiland Williams had a workmanlike afternoon with 68 yards on the ground and 27 yards receiving. How bad did things get for the short handed line? Stephon Heyer had to play guard for the first time at any level. 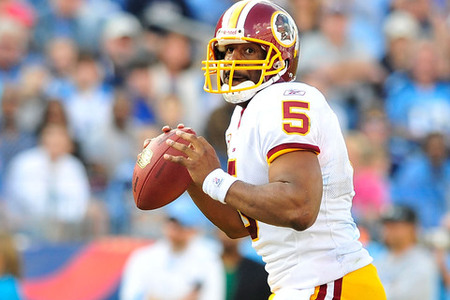 Not once, but twice. McNabb (376 yards and 81.7 QB rating) engineered successful two-minute drives before halftime and at the end of regulation. Unfortunately, kicker Graham Gano was unable to convert field goals on both occasions. But still, it was a step in the right direction that McNabb, and not Rex Grossman,was entrusted with those drives. As you would expect, it was a topic that came up when Coach Mike Shanahan addressed the media.

"So I guess we don't have to talk about that any more," Shanahan said with a smile.

Perhaps the most amazing number on Sunday was zero. As in, the number of catches for Randy Moss. Yes, he did have a touchdown called back after he obviously pushed off on DeAngelo Hall, but he was only targeted three times! Maybe the other 30 teams that passed on the opportunity to claim him off waivers were right. Give Defensive Cordinator Jim Haslett credit for a strong scheme and the secondary, led by Hall, for their work on the former Pro Bowler.

Meanwhile, Santana Moss played like a Pro Bowler, with six catches and 106 yards and a touchdown. He and McNabb missed on an early opportunity, but were on the same page most of the time the rest of the day.

GA-NO and Then YES!

Graham Gano's miss from 47 yards out that fell short may have had Bruce Allen looking for Jeff Reed's phone number. However, his game winner in overtime from 48 yards out might have saved his job. Also, give the Titans defense plenty of credit for the game-winning drive, as they gave the Skins 35 yards on penalties.

After the Redskins first timeout of the game, veteran announcer Dick Stockton said, "Confusion with the Redkins Offense," which is bound to be the name of the season-ending NFL films DVD about this season. However, that was not nearly as funny as Jim Mora Jr proclaiming Wide Receiver Joey Galloway has "still got it" after a 20-yard reception on 3rd and 18. To quote his dad, Jim Mora Sr., "You think you know but you don't!"

However, nothing could put a damper on the Redskins' win. So what about the NFC Playoff Race? Once again let me quote the great Jim Mora Sr.

Terps Will Have to Wait Til Next Year

It would have been the icing on the cake of a great week and season for Ralph Friedgen, who was told earlier in the week he would be back next season. But Maryland's dreams were dashed with 54 seconds left when quarterback Danny O'Brien was picked off by Seminoles safety Nick Moody, who returned it 96 yards for the game-clinching  touchdown. The 30-16 loss means no trip to Charlotte for the ACC Championshipship Game for the Terps, but with plenty of young talent, the Fridge feels good about their future.

"This team is growing," Friedgen said. "We're getting better. We're going to beat one of these teams one day. We are very close. I see it."

A Record Setting Day for Dobbs in Navy Win

Navy (8-3) beat Arkansas State 35-19, and in the process, quarterback Ricky Dobbs added to his already impressive career at the Academy. On Senior Day, Dobbs had three touchdown runs that gave him 40 over the last two seasons, a record for running touchdowns by a quarterback in successive seasons. Dobbs also has 48 rushing touchdowns in his career, which puts his fifth all-time among quarterbacks.