Have The Washington Redskins Discovered An Offensive Line That Works?

The Redskins won a tough game yesterday due in part to an overachieving offensive line thrown together due to injury. Was that the kind of performance that can be replicated? If so, should the Redskins keep this group together?

Share All sharing options for: Have The Washington Redskins Discovered An Offensive Line That Works?

Good football teams win the battle up front game in and game out. Ask the 1991 edition of the Washington Redskins. The Hogs allowed opposing defenses to sack quarterback Mark Rypien just nine times on the year en route to a Super Bowl trophy. A good offensive line can dictate the line of scrimmage and control the ball, giving their team a legitimate chance at winning every single week.

After experiencing so much success behind one of the greatest offensive lines in NFL history, one would expect the Redskins to always remain committed to building from the trenches out. Unfortunately, a lack of attention to detail has recently left the offensive line undermanned and outplayed for much of the past few seasons.

The Redskins started the 2008 season at 6-2, but since they have gone 11-23 largely due to the woeful state of their offensive line. As bookend tackles Jon Jansen and Chris Samuels faded into the sunset, the Redskins failed to address the need for new blood up front. Throughout the past three years, while Washington has struggled to win football games, there has been one constant. The offensive line has been old, injury-prone, and ineffective for the majority of the past 34 games, contributing heavily to the offensive futility plaguing the team.

This season Mike Shanahan added a crucial piece to the puzzle by drafting Trent Williams to play left tackle. While Williams has been reliable, it's the veteran lineman who haven't been holding up their end. The protection for Donovan McNabb has been inconsistent, playing a factor in his erratic play while the run blocking has been horrid for most of the season.

The Redskins are saddled with a bunch of over-the-hill, second rate linemen once again this year, and it has shown. Shanahan was unable to revamp the entire line in just one offseason, and so the likes of Artis Hicks, Stephon Heyer, and Kory Lichtensteiger have been forced into starting roles. Casey Rabach, once a serviceable center, is now a shell of his former self, as he spends most Sundays tripping McNabb or being pushed into him by defensive tackles. Meanwhile Jammal Brown, the tackle the Redskins traded a draft pick away to get this summer, has been ravaged by recurring injuries.

If it's a bad matchup in the trenches, then it's safe to expect little offensively from Washington. Heading into Sunday's game against Tennessee, there was little reason to doubt that the Titans defensive line, with their complex schemes and pressure-generating tactics wouldn't win the day. 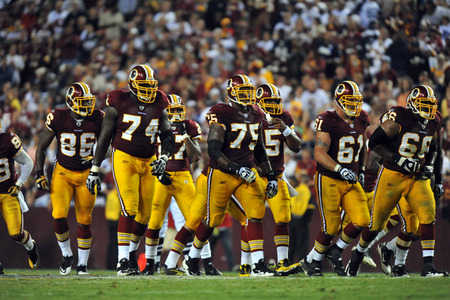 The Redskins surprisingly dominated the line of scrimmage for large parts of the game despite being without Hicks and losing Rabach and Derrick Dockery. The Titans, ranked 11th against the run entering the contest, allowed 107 yards rushing to Washington and were also kept away from McNabb for much of the tilt.

The result was one of the better outings in McNabb's short stint with the Redskins. The offense possessed the ball for over 40 minutes. Kyle Shanahan was able to open up his playbook, as the offense established a rhythm. Meanwhile, the Titans were left gasping for air as the Keiland Williams-Clinton Portis combination proved too much to handle.

When the offensive line plays well, it leads to an improved offensive performance. Though he was sacked three times and threw a costly interception, McNabb made sure to put the Redskins in position to score all day and connected with nine different receivers.

This despite the Redskins using a tackle to play guard and a guard to play center. After Rabach and Dockery went down, the coaching staff threw together a line combination that I'm sure no one expected would be successful. Heyer, normally a tackle, played right guard. Will Montgomery, in his first game all season, played center while Brown, Lichtensteiger, and Williams rounded it out.

I think it's safe to state that Heyer and Montgomery are both utility backups, but yesterday they outplayed the usual starters in Hicks and Rabach. Oddly enough, the latter were featured on Yahoo! Sports' Shutdown Corner No-Pro Team as two of the most disappointing linemen in the NFL. Maybe offensive line coach Chris Foerster missed something when he didn't get those guys out sooner in favor of Heyer and Montgomery. 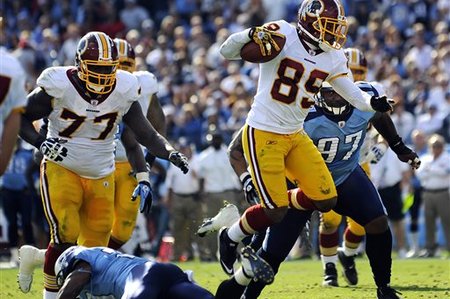 There's still a lot of season left, and even after yesterday's performance I still have plenty of doubts about whether this line can compete every week. Heyer had a shockingly strong game; something you can't count on every week, and the surge up front was one of those rare cohesive performances we haven't seen all season. With the injuries, there isn't much depth, and more bad matchups loom ahead in the Giants and Cowboys. But what do I know?

The personnel on the line hardly inspires confidence. Entrusting a starting position to the temperamental Heyer and counting on Brown to be healthy aren't exactly the dreams of every coach, but that's the position Mike Shanahan is in. He certainly did more with less against the Titans, rekindling memories of the Hogs in all their resplendent glory. However, a one game apparition means nothing. The offensive line will need to match Sunday's efforts in every game down the stretch if the team is to have a chance at securing a berth.

For a line plagued by inconsistency for so long, will it be too much to ask?