The Redskins Are Winless When Brandon Banks Gets Robbed Of Touchdowns

Share All sharing options for: The Redskins Are Winless When Brandon Banks Gets Robbed Of Touchdowns

Brandon Banks is quickly becoming a fan favorite for the Redskins. The tiny speedster gives the Redskins something they haven't had in quite some time: A young, dynamic playmaker on special teams who is a threat to score every time he touches the ball.

Unfortunately for Redskins fans, even when it looks like Banks will score, they still have to hold their breath. That's because they know someone on the Redskins special teams unit could commit an illegal block in the back, negating the score.

Twice this season Banks has been robbed of touchdowns, and in both games, the Redskins lost heart-breakers.

First it was against the Lions in Week 8, where an illegal block in the back negated a 90+ yard kickoff return for a TD. Had that play counted, Banks could have had an even bigger impact as he wound up scoring later in that game to briefly give the Redskins a lead against Detroit. The Redskins were down 6 points before McNabb got benched, so losing out on those points hurt.

Enter Perry Riley in in today's game against the Vikings. Not only did he commit a critical block in the back that pinned the Redskins deep in their own territory, but he had the biggest mistake of the game by again committing an illegal block in the back, robbing Banks of  the go-ahead punt return for a touchdown. Ouch. 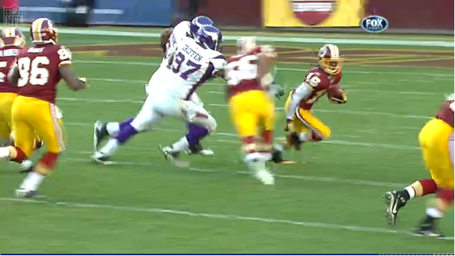 It almost seems as if the Redskins special teams unit is uncomfortable having a returner who can actually score any time he touches the ball, as it feels like Danny Smith's unit is just trying to make perfect blocks without getting flagged. It seems like no one wants to be "that guy" that gets flagged on a potential return for a touchdown. Unfortunately for this special teams unit, on most big returns, someone winds up being guilty of a penalty.

No wonder Riley didn't want to talk to the media after the game.