Even an early exit from Adrian Peterson could not help the Washington Redskins against the previously lifeless Minnesota Vikings. Also, why Ralph Friedgen should win the ACC Coach of the Year.

A week after "fighting their guts out" in Tennessee, the Washington Redskins took a shot to the gut. That was 41-year old Brett Favre, not Michael Vick, scrambling for 10 yards on a Third and 8 that put the game on ice for the Minnesota Vikings . He was named the AARP player of the game, seeing as his run was longer than any Redskins running back had the entire day. The future Hall of Famer was able to make enough plays on a day he lost Pro Bowl running back Adrian Peterson with 9:48 left in the second quarter. The Vikings came into the game 3-7, but played with more urgency than the Redskins, who allegedly were in the NFC playoff race.

Great Start By the Offense, Not So Great for the Defense

Donovan McNabb and the Redskins got off to a great start. After winning the toss, they embarked on a 13-play, 83-yard drive that ended with a 10-yard touchdown strike from Donovan McNabb to Fred Davis. On the drive, the Redskins were 4-4 on third downs. However, the defensive start was not very good. Favre and the Vikings offense answered quickly with a seven-play 71 yard drive that took only 3:46. Adrian Peterson punched it in from five yards out to tied the game at seven.

After the first drive, the Redskins only had six more first downs, were only three for their next 11 on third downs and had only 133 more yards the rest of the way. There were drops too by usually sure-handed players like Chris Cooley and Santana Moss. The second Moss drop was picked off by former Maryland star EJ Henderson.

The smallest player made the biggest play that didn't count. Brandon Banks returned a punt 77 yards for what should have been the go-ahead touchdown with 7:15 left in the fourth quarter. However, the play was nullified because of an illegal block by fellow rookie Perry Riley. The sad thing was that the block looked unecessary. Banks did have a 65-yard kickoff return and played in the Wildcat on two snaps on the first drive. He only got a combined six yards on those plays, but it is a good idea to get him more touches.

Protection Takes a Step Back

A week after a good performance with a patchwork offensive line, the Redskins took a huge step backwards. There was no running game, which made it easy for the Vikings front four to tee off on McNabb. McNabb was sacked four times, was hurried on four other occasions and was hit on several more. 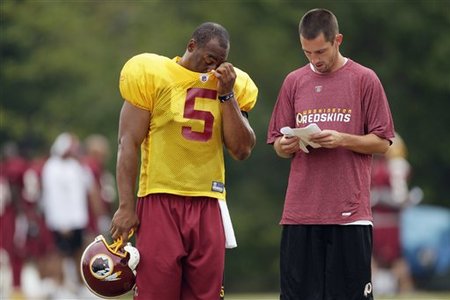 Is the Running Game Still in Denver?

Is it time for daddy to send his son to his room, or at least take the playsheet from him? Dan Snyder paid Mike Shanahan the big bucks to coach his team. Shouldn't he put his imprints on Kyle Shanahan's offense that so badly lacks balance? A three to one pass to run ratio is not helping an already subpar pass-blocking offensive line.

Or, maybe Mike needs to have someone in Denver check to see if his old running plays got left behind. Maybe they are behind all those walk-through tapes Josh McDaniels has been collecting.

Defense Unable to Take this One Away

The Redskins defense gives up a lot of yards, but they did a respectable job against the Vikings, allowing just 299 yards on Sunday. Brett Favre did not make any big plays or send out any text-message photos. However, the defense's calling card has been creating turnovers, and they created zero against the NFL's all-time interception leader. The Redskins have takeaways in all five wins this season.

Albert Haynesworth gets paid the big bucks, and he probably had the money breakdown on this team after Sunday's loss.

"I think maybe we just relax and think that if we're supposed to beat that team, we're going to beat that team and we don't go out there an play our ‘A' game," the outspoken defensive lineman said. "No matter if we're playing the Patriots, the Vikings... or even a freaking high school team, you gotta come out here and play your ‘A' game."

Haynesworth likely will gain a few more Redskins supporters for his comments when asked specifically what went wrong. 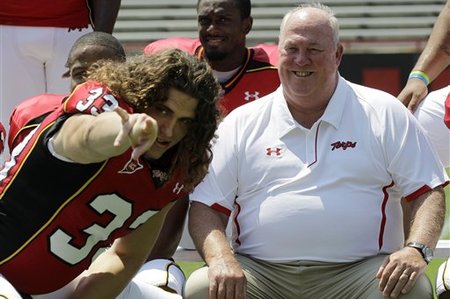 Ralph Friedgen Should Be the ACC Coach Of The Year

All apologies to Frank Beamer, who just passed Woody Hayes for ninth on the all-time wins list, but Ralph Friedgen should be the ACC Coach of the Year. His team was picked dead last in the Atlantic division, while Beamer's team was picked to win the ACC. Friedgen played with a redshirt freshman quarterback, while Beamer played with senior star Tyrod Taylor. Plus Beamer's boys lost to James Madison.

Maryland at 8-4 appears to have some bowl options after their upset win over North Carolina State Saturday. They could stay local with the Military bowl or head to a number other more attractive options like the Champs Sports Bowl (12/28), the Sun Bowl (12/31), the Meineke Car Care Bowl (12/31) or the Music City Bowl (12/30).