The Redskins have the NFL's oldest roster, but they might also have the league's most exciting young return man in Brandon Banks. Is Banks the game-changer the Redskins have been waiting for?

Share All sharing options for: Washington Redskins Can Bank On Brandon Banks

LANDOVER, MD - On a day of underwhelming performances at FedEx Field during a disappointing 17-13 Redskins loss to the Minnesota Vikings, Brandon Banks continued to cement his image as the poster boy of NFL special teams in 2010.

The Redskins may have turned in a lifeless 60 minutes of football on Sunday, allowing Brett Favre to power walk his way to a win, but the blame went nowhere near Banks. An older roster is starting to look its age down the stretch and Banks is one of the few players breathing life into a dormant franchise.

On Sunday, Banks had a 65-yard kickoff return to set up a field goal and also had the potential game-winning 77-yard punt return that was called back for an illegal block in the back. He did all this just weeks after undergoing knee surgery, which is visibly bothering him.

In fact, Banks hasn't missed a game since the surgery, and though he has lacked the same burst we saw a few weeks ago in Detroit, he is still presently one of the best in the business. Should he break through and have another banner day by the end of 2010, the entire NFL community will recognize that he is the heir apparent to Devin Hester.

"What a great effort today both with the punt returns and kick-off returns," Shanahan said. "He is getting healthier each day and he is getting back into football shape. It has taken him a while with his injuries, but he is a big play guy. He wants to make plays and more often than not he does." 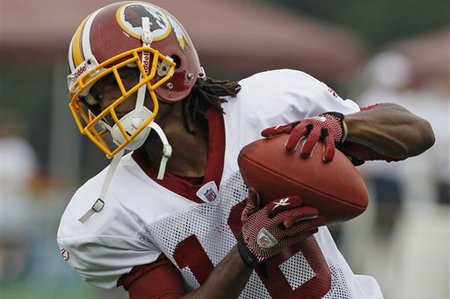 Banks was a longshot to make the roster in training camp, but his speed and playmaking abilities could not be ignored after he took a punt back 77 yards for a score in the first preseason game of the year against Buffalo. The question was whether a 150-pound wide receiver with fumbling concerns was actually worth a roster spot.

Shanahan and company decided to take a chance and it's turned out to be one of their best moves this year. Banks has 1,109 combined return yards on the season and had 271 of them in a 37-25 loss to Detroit, setting a franchise record for the most return yards in a single game.

Banks' 272 punt return yards mark the most by a Redskin since the 342 yards amassed by Antwaan Randle El in 2006. The kicker is that Banks has only played in seven games and is on pace to shatter Randle El's 2006 totals. Heading into the game against the Vikings, Banks was already ranked fifth in the NFL in average yards per punt return and has returned three kicks for touchdowns this season (two of which were called back due to penalties).

Guys like Dante "the Human Joystick" Hall and Hester became household names despite limited touches in a minor role because they were explosive, creative and athletic. Banks is certainly in the mold of those players: a pint-sized dynamo with a penchant for the big play. The Redskins have lacked a player with Banks' capabilities since Brian Mitchell was cut in 2000, and no matter who they have used to field kicks, the return game has suffered. A good return man is hard to find, but it seems the Redskins may have uncovered the next big thing in game-breaking firepower.

"He's an explosive guy that can make plays," receiver Santana Moss said. "He's a home-run hitter anytime he touches the ball. He's one of those guys that every team wishes they had, and we are fortunate and lucky to have him."

Banks is the type of player who can quickly change the complexion of a game. His returns flip field position, alter the scoreboard, break ankles, you name it. Just add water and you've got yourself an athletic freak who can knock your socks off on command. As long as punters kick to him, Banks will be one of those rare commodities. Seriously, when was the last time opposing teams had to gameplan for the Redskins return game?

Special teams coach Danny Smith isn't taking Banks for granted. Who could blame him after he suffered through four seasons of the monstrosity that was Randle El?

"He's a tough kid; he's got a lot of tools," Smith said after the loss to Minnesota. "I think you saw today him setting things up better. Those are the things we are working on him with." 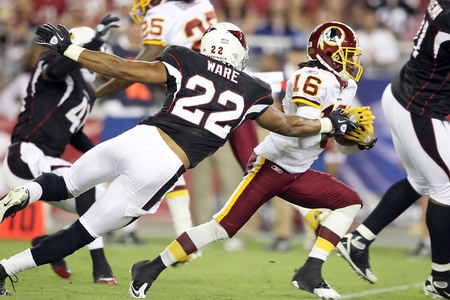 As for Banks himself, let's just say there's no shortage in the confidence department for the Kansas State product. After telling reporters he was "nowhere near 100 percent," Banks dropped a bombshell.

The thing about that quote is that it's accurate. Banks is a threat to score whenever he gets his mitts on the ball. Why else has Washington tried to sneak him in at receiver the past few weeks or break out the Wildcat for the first time ever on Sunday? Banks was the guy taking shotgun snaps with Donovan McNabb out wide against Minnesota. He was also the guy with the big 15-yard catch the week before in Tennessee. The Redskins want to create chances for the youngster because he's their best weapon.

The reign of these diminutive return men are typically short-lived as opposing teams catch on, and a guy of Banks' stature might not be able to withstand the wear and tear for long. However, as of right now, the Redskins have a special player on their hands. He's the proverbial ace in the hole; that wild-card who can shift the fortunes of a tight game Washington's way. It's simply a matter of staying creative and giving him opportunities to work his magic.