The Redskins are a NFL pregame shows' dream. Even in the bye week, the drama-laden Redskins cannot stay out of the headlines.

Even during the bye week, there is no getting away from the Soap Opera known as the Washington Redskins.  On Saturday night, I watched a Pac-10 football showdown between Arizona and Stanford, which you'd think would be safe from Redskins talk. Apparently not. Brent Musberger, after a promo for NFL Countdown on ESPN the next day, starts in on Mike Shanahan pulling Donovan McNabb and how strange of a move it was. Kirk Herbstreit, the color commentator, piled on too. I agreed with everything they said, but that was just an appetizer to the onslaught that took place Sunday morning during the NFL pregame shows.

It is a shame Mike Shanahan could not have kept this stuff in house, because the Redskins have played much better this season and are very much in the NFC mix at 4-4 despite all the struggles on offense.  Certainly McNabb is a huge part of those struggles, but he's still the best option at quarterback. John Elway is not walking through that door.

There seems to be a consistent theme on all the networks pregame shows: Mike and Kyle Shanahan are not happy with the play of McNabb. FOX's Jay Glazer reported that they even considered benching the veteran quarterback before the Philadelphia game. Could you have imagined if they had done that? You think the situation is bad now? Child, please!

Anyway, here are some of the highlights from Sunday. First, from ESPN. Here is what former Bronco Tom Jackson (no relation to me, in case you were wondering) had to say about the situation.

"If you have a problem with your quarterback," Jackson said, "you call [him] in and you discuss that. This has now become so public that the quarterback is going to be completely embarrassed and it makes his job harder."

"I always thought the job of a coach is to adjust your system to the guy who's quarterbacking your team," Jackson said. "This situation is irreconcilable."

Great point on manning up and talking to the player instead of starting or allowing a public campaign. Also, where are the adjustments with this offense? They were sorely lacking in the Jim Zorn years. Also, in light of all this, let's give Defensive Coordinator Jim Haslett credit during all the Albert Haynesworth dram. He has done a nice job of making his  defense fit his players.

Meanwhile, back to the pregame shows, this time let us focus on FOX. Shanahan even got beat up on by a member of the coaching fraternity, Extenze Spokesman Jimmy Johnson. Here's what he had to say:

"Classic case of 'open mouth, insert foot.' Mike was wrong for benching him, he was wrong for saying what he said after the game, he was wrong for the comments the next day and what he didn't say is what he believes. In my opinion, he's not enamored with McNabb as his quarterback."

" ... If you don't stand up for yourself, the other players on your team and around the league are gonna say, 'Where's the backbone to this guy?' In the NFL, the player-coach relationship is not one where 'I work for you.' As a player and a coach I work with you. What they're doing right now in Washington is not working with Donovan McNabb."

Thank Goodness for the Vikings and the Cowboys

It is hard to understand how the Shanahans (Mike and Kyle) think Rex Grossman is the answer.  It is even harder to understand how embarrassing the quarterback you traded two draft picks for makes the situation better. If it was not for the Cowboys and the Vikings, the Redskins would be the laughingstock of the league. So, thanks, Cowboys and Vikings

Mike Shanahan has a Future in Politics

I know it was election week, but that doesn't mean the coach of the team in D.C. needs to lie and spin to the media like a politician. The buck starts with Mike Shanahan, and that is why he deserves all the blame for the McNabb saga.  Let's go on the premise for a second that McNabb is in bad shape, has "poor" tempo in practice and can't learn a new offense (give the franchise some credit ... they have not badmouthed McNabb's mother's Chunky Soup commercial yet).  Sure this may be a good move in a political race to trash your opponent, but this guy is on your team, this is the Quarterback you traded two draft picks to get. The campaign to badmouth his own quarterback has also left the coach open for revisionist history in the Haynesworth Saga as well. Plenty of spin doctors are now siding with Big Al after this incident.

The Redskins don't have a good offense line (love the time share at right tackle) or a consistent running game ... and please don't get me started on the wide receiver position, which has two players that have shown to be NFL quality this season (Santana Moss and Anthony Armstrong). Do you know how many other NFL teams would have signed Joey Galloway? Zero!

One of the major bright spots for the Redskins this season has been rookie Free Agent Brandon Banks, and now it appears he will be out a couple weeks. Banks reportedly underwent a knee procedure during the bye week. 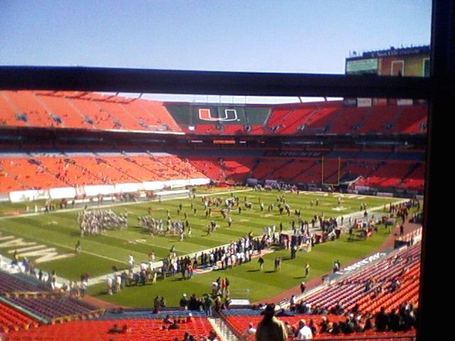 Maryland Wastes an Opportunity in Miami

Miami came into Saturday's game against Maryland shorthanded not only on the field (most notably starting quarterback Jacory Harris was out), but in the stands. Was it dress up a like an orange seat day in Miami?

Unfortunately, in the end none of it mattered for the Terps, as the Hurricanes rallied for a 26-20 victory. Despite the defeat Maryland still controls their destiny in the Atlantic Division of the ACC, and that maybe why Ralph Friedgen was able to find a silver lining after the loss.

"This is how we can play," Maryland Coach Ralph Friedgen said. "That's something we should be able to take from this."

Navy Has Record-Setting Day at ECU

I honestly saw the Navy and East Carolina score on the bottom line Saturday and thought they had played basketball. Navy put up a program best 76 in a 76-35 win over the Pirates. I think the Midshipman just scored again. The win means Navy will play in the Poinsettia Bowl on Dec. 23 in San Diego against a Mountain West Conference team. However, Air Force did lock up the Commanders and Chief trophy with a win over Army, without putting up 76 points of course.