Just because a bingo caller didn't come out of retirement to take over the playcalling duties doesn't mean there wasn't plenty to talk about in the first half of the season for the Washington Redskins.

Share All sharing options for: Washington Redskins' 10 Defining Moments of 2010

As sad as it is for football fanatics to admit, the 2010 season is now officially halfway over. While there is still plenty of meaningful football left to be played this season, it’s important to pause for a moment to look back at how the first half has played out for the Washington Redskins.

With that in mind, I’ve compiled a list of the team's 10 defining moments of the 2010 season. But before we get to that, here are a few moments that just missed the cut:

Clinton Portis' 53 flavors. For better or worse, we’ve officially reached the point of the Portis era where his most memorable moments come off the field, rather than on it. Sure, he didn’t know much about the incident involving Ines Sainz and the New York Jets, but that didn’t stop him from sharing the following nugget:

"And I mean, you put a woman and you give her a choice of 53 athletes, somebody got to be appealing to her. You know, somebody got to spark her interest, or she’s gonna want somebody. I don’t know what kind of woman won’t, if you get to go and look at 53 men’s packages."

Although Portis’ career is clearly winding down, let’s all hope and pray he continues to do radio even after he hangs up the cleats.

"He seems to do this each week, regardless if they double-team him or not," said Redskins head coach Mike Shanahan of Alexander. "But that was one of the best hits I've been around since I've been in the NFL. I mean, that was an explosion on the sidelines. So that was very, very special."

Devin Thomas gets cut. Thomas was the 34th overall pick in the 2008 NFL draft. Less than three seasons later, he was released because the team no longer felt he could contribute. Maybe he gets it together in Carolina with the Panthers, but Thomas’ time in Washington can only be remembered as disappointing.

Derrick Dockery sits down. Last season, Dockery was considered one of the only bright spots on Washington’s terrible offensive line. This year, he’s getting paid to watch games in street clothes.

Dockery, who is in the second year of a five-year, $26.5 million contract, had played in 111 consecutive games before Shanahan decided to sit him in favor of someone named Kory Lichtensteiger, who is allegedly more athletic than Dockery. My counterargument would be that it doesn’t matter how athletic you are when you’re getting pushed back five yards a snap, but in this offense, I guess it does.

Anthony Armstrong catches. There’s a lot to like about Armstrong, whose career began in a parking lot in Nowhere, Texas. It’s too early to say whether or not he can definitively become a number-two receiver in the NFL, but he’s proven he belongs on the playing field. 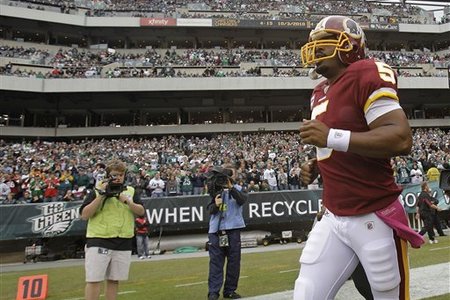 Seriously, if I suggested before the season began that Philly fans would handle McNabb better than Shanahan people would have laughed me out of the building. And yet, Eagles fans shocked everyone – McNabb included – by doing something classy for once and giving a standing ovation to the man who was the face of their franchise for 11 seasons in his return to Philadelphia.

Once the game started, Philly fans resorted back to booing McNabb whenever possible, but that was okay too. McNabb led the Redskins to victory, so we’ll call it even.

The only reason I can come up with as to why Galloway continues to remain employed by the Redskins – let alone find his way onto the field during actual games – is that he must have blackmail photos of someone important at Redskins Park.

Case in point: the Redskins ran 516 plays on offense in their first eight games. Galloway was on the field for 289 of those plays and has just nine catches for 141 yards to show for it. In the last six games, Galloway has six total catches for 53 yards.

"We're going to play the best players," Shanahan said. "It's based on film. You evaluate everything."

Clearly Galloway has film of something he shouldn’t.

I admit: in the heat of the moment, I blame safety Reed Doughty for letting Texans receiver Andre Johnson haul in a touchdown on a desperation 4th-and-10 play that would have sealed the game for Washington in Week 2 against the Texans. But when I went back and watched the play again, it was clear that Buchanon gave up on the play at around the 10-yard-line, leaving Doughty alone to defend one of the premier receivers in the game.

Okay, so Landry has seemingly been flexing after every play since he came into the league, but at least his play warrants some celebration this season. It appears that all Landry needed to do was be placed back at his preferred strong safety spot rather than trying to play centerfield against those pesky wide outs who utilize double moves far too often for Landry’s liking.

Landry has played at an All-Pro level all season long, but his overtime interception against Green Bay is easily one of the biggest moments of his young career.

Johnson looked great all offseason. He was easily one of the standout players through minicamp and training camp, and then a funny thing happened. Games began and suddenly Johnson couldn’t play football anymore.

Fortunately for Redskins fans, Ryan Torain stepped in and filled the void. A backfield that started out with Portis, Johnson and Willie Parker now features 24-year-old Torain, who leads the team with 391 yards and three touchdowns. 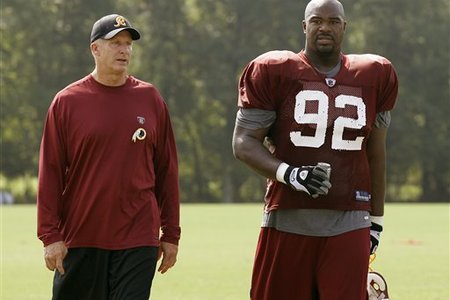 Hey, remember when everyone turned on Haynesworth and begged the Redskins to cut ties with Fat Albert "for the good of the team?" Yeah, me neither.

As far as my revisionist history goes, we’ve all always loved and supported Haynesworth and he’s responded by getting better each week this season. His goal-line stop of Jay Cutler against the Chicago Bears was huge – enabling linebacker London Fletcher time to get involved and strip the Bears quarterback of the ball.

If that play doesn’t happen, we’re likely forced to sit around and figure out how on earth the Redskins lost a game in which the defense created six turnovers. Not exactly a situation I’m in a rush to deal with.

Banks is Washington’s most electrifying player since Brian Mitchell set the standard in the return game. He’s cut straight from the mold of Joshua Cribbs in Cleveland and Devin Hester in Chicago as a guy who only needs a small opening to make magic happen in the return game.

Against Detroit, Banks became the first returner to take a kick for a touchdown since 2006 and he set a franchise record for return yards in a single game with 271. Not bad for a guy who the Redskins cut before the season started.

If not for Orakpo, Dallas quarterback Tony Romo completes a 13-yard touchdown pass to receiver Roy Williams to steal victory for the hated rival on the final play of the season opener.

Thankfully, offensive lineman Alex Barron, the most penalized player in football, simply couldn’t keep up with Orakpo and was forced to blatantly mug the second-year standout on the game’s pivotal play. Since then, Orakpo has remained among the league leaders in sacks even though he’s been held more than any other defensive player in the NFL, while the Cowboys have completely self destructed. Good times.

Hall became the 19th player in NFL history to get four interceptions in a single game. Making the achievement more impressive is the fact that Hall needed just one half to tie the record. For reasons known only to morons, Cutler kept throwing at him and the Virginia Tech product kept making the Bears pay.

Hall now has six interceptions on the year and has scored two touchdowns – a 32-yard fumble return against Dallas and a 92-yard interception return against Chicago. I’d point out that Hall has contributed way more offensively than Galloway could dream of this season, but why bother? 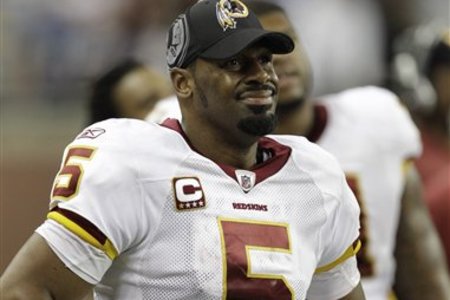 The only thing dumber than Shanahan’s decision to bench McNabb in favor of Grossman in the deciding moments against Detroit was his explanation of the move afterwards. Honestly, the only two people who thought Grossman gave the Redskins a better chance at victory were Shanahan and Grossman’s mom. Even his dad knew it wasn’t going to work.

For future reference, please have the courtesy to lie to Redskins fans and tell us your franchise quarterback is hurt when you bench him. That’ll go over much better than questioning his intelligence and conditioning.