Five reasons why the end of the Albert Haynesworth era is the beginning of the next great era in Washington Redskins football.

... and I am a Redskins fan. It's been almost 20 years since my last Super Bowl.

Listen, we have been surrounded by reasons to jump ship for a LONG time. But those of us who have stood by our team stand to gain the most in 2011 (at least it says so here). The Albert Haynesworth decision is seen by many as the end to a crazy drama that probably dragged on far too long. I see it as the beginning to what should be a brand new Golden Age for the Washington Redskins. Here's why:

Neither Mike Shanahan nor Bruce Allen brought in Albert Haynesworth. This was yet another item piled high on the dung heap that Cerrato left the new regime to deal with in 2010. Prior to playing a game this season, we still had a defense that people thought highly of as well as a quarterback that appeared to have some gas left in the tank. As it turns out, you'd have to be high to think our defense is any good and the only gas in Donovan's McNabb's tank is from the extra beefy Campbell's soup he had been eating.

Nonetheless, the idea that Haynesworth would not make our defense better was not a terrible one. The fight to get him in the fold was a worthy one in my opinion, and one that Haynesworth fought every step of the way. If Shanahan and Allen are guilty of anything, it is of underestimating the resolve of someone who had been paid $21 million to not do any actual work for the money. With the suspension, another chapter in the Cerrato Nightmare is closer to being finished. The bad news is that there are more chapters in that book than the freaking Bible ... but, you know, baby steps. 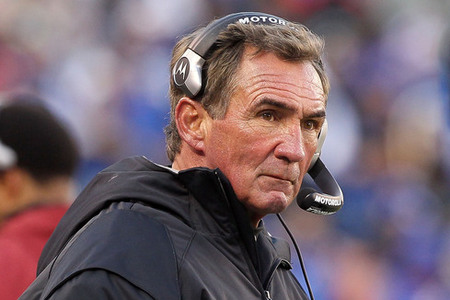 The inmates have been running the asylum at Redskins Park for years. I think Shanahan was well on his way to righting that aspect of things already, but as long as Haynesworth was on the sideline, there was always going to be this issue of "Who is winning?" I think it is fair to say that this kind of public struggle between organization/coach and player produces few "winners," but when the line in the sand is as impossible to see as it has been over the years, sometimes this is the kind of event that has to take place.

This is not me in the center of the ring holding Shanahan's boxing glove covered hand in the air. I think it is more a case that going forward, an actual precedent has been established where enough will actually be enough. (Cue the argument about whether enough was enough three months ago.)

No. 3: Locker Room Cancer Spreads Fast and Can Span Seasons

How many times over the last decade did the same issues from previous seasons carry over to what should have been a fresh start the following fall? Clinton Portis' special treatment comes to mind. When these kinds of things span from one season to the next, it kind of exponentially grows and seeps deeper and deeper into the nooks and crannies of an organization. It was one thing for Allen and Shanahan to inherit this from last year and attempt to deal with it in 2010. But to leave things unresolved prior to season's end could have been disastrous.

There is NO question that Haynesworth will be somewhere else next season. And despite our elderly starting lineup, we do have a lot of young players on this roster who have been paying attention all along. Cutting out Haynesworth from the show they are watching should pay off down the road. (By the way, the fact that some of these things are seen as positives for us is kind of depressing.) 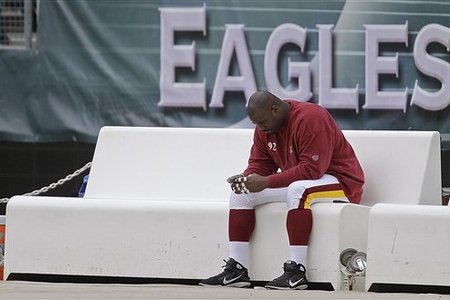 This is my No. 1. It got real personal for me over the last few months. I have paid far too much of my own hard-earned money to support my favorite team to be cool with a dude taking $21 million and then demanding a trade and refusing to play for the Redskins. I will not absolve Shanahan and/or Allen completely for their roles in this debacle, but as long as I am taking sides, chalk me up as 100-percent anti-Haynesworth.

Put simply, he's a bum. Stronger language is not welcome on this site, otherwise it would be employed here. How do you talk yourself up as a potential Hall of Fame player and refuse to play football for the team that just stroked you a check for MILLIONS? It doesn't make sense. Countless Hall of Fame players proved their worth in unfavorable situations. You don't get to be considered great if you will ONLY play when things are stacked up as good as they possibly can for you. His existence is insulting to me.

I won't speak for every Redskins fan out there, but I have come to find out I am not even a little bit alone.

No. 5: I think This WILL Make Certain Kinds of Players Want to Come Here

We have attracted a lot of dudes over the years just looking for a payday. As long as Dan Snyder still owns the team, that will always be a risk we carry. But there are a lot of guys out there who not only love the game of football, but they care about winning and they care about making guys around them better. Sometimes when your roster has one too many players that care too much about only themselves, you have no room for the high character acquisitions you need.

It is easy to attract a me-first guy with dollar signs. But to attract the high character players, you have to prove you deserve their services through your actions. Granted, there are good players that will look at what Shanahan has done and decide that they don't want to play for him. But I think (and I could be wrong) that there will be players this offseason who decide that they will play for a coach who values conditioning, heart, effort and participation more than the size of his paycheck. That player could end up being the guy who takes our defense to new heights, or our offense to the end zone.

We have to start somewhere. Eventually. Even without making it to the playoffs this season, I see Week 14 as the beginning of something potentially great.