Did The Washington Redskins Get Five Downs On Their Game-Ending Touchdown?

Share All sharing options for: Did The Washington Redskins Get Five Downs On Their Game-Ending Touchdown?

When we first think of the Washington Redskins' 17-16 loss to the Tampa Bay Buccaneers on Sunday, the first thing we'll think about is the botched extra point snap that prevented the Redskins from tying the game. But there's a legitimate argument that the play that led to that botched snap -- Santana Moss' touchdown on fourth down -- should never have happened?

Why? The FOX cameras showed that the Redskins may have gotten two chances at fourth down. You can see the video, with the confused FOX announcers, here. The telestrator clearly marked the previous play - an incompletion to Fred Davis - as something that happened on fourth down. So what happened? Why the confusion?

The explanation, whether you buy it or not, is below the jump:

The confusion stems from what happened on a play a few plays earlier. The Redskins had a first and 10 at the Buccaneers 12-yard line. Donovan McNabb threw a pass in the flat to Anthony Armstrong, who fought to get to the first-down marker at the two-yard line. Did he get there? This screenshot by NFL Spin Zone suggests he didn't. 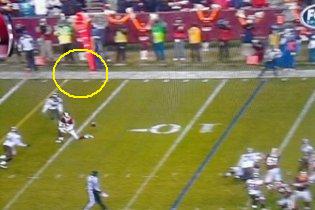 That explains how the next four plays make sense:

So how exactly do the referees explain why the first-down chain was at the three-yard line instead of the two-yard line. Here's their official explanation:

"The first pass that was made, the initial ruling was first down to the 2-1/2 yard line, and the auxiliary box on the other side did not turn over. It was showing second down. The primary box on the head linesman side, which is the main down box, had first down. So we corrected the 2 because it hung up there for a while, and we corrected it to 1."

But if you look at that screenshot above, the line of scrimmage was the 12-yard line, and the first-down marker was clearly on the three-yard line. So all this stuff about the first down coming on the 2 1/2-yard line doesn't really make sense.
Not that it mattered in the end, but in a game where the Redskins got screwed by a botched holding call, they also appeared to get lucky thanks to a referee's gaffe.