The Backup Plan: Mike Shanahan Finds A Few Solutions After A Win In Jacksonville

The Redskins have been "evaluating" players the last couple games, and if Sunday's win over Jacksonville is any indication, they may have stumbled on some people who can help in the future.

Share All sharing options for: The Backup Plan: Mike Shanahan Finds A Few Solutions After A Win In Jacksonville

If Sunday's win over the Jaguars was any indication, then the Redskins might have had pieces for the future in reserve all season. Injuries paved the way for a winning combination on the field in an overtime win at Jacksonville and the performance of several unheralded players might have been enough to ensure them a shot at playing in Washington beyond this disappointment of a season. It's true: Give hungry players a chance and they will produce.

Mike Shanahan made the final three games an evaluation process after being eliminated from playoff contention. He wanted to see what his scrubs could do when thrust in a prominent role and based on what he's seen so far, he can't be too disappointed. 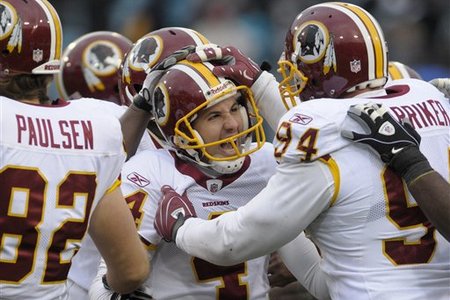 The poor play along the defensive line has been a major issue this year. It wasn't against the Jaguars though. Somehow the lineup of Adam Carriker, Anthony Bryant, and Vonnie Holliday won the battle at the point of attack, commanded extra blockers to deal with them, and also pressured Jags' quarterback David Garrard all game long.

The Redskins held the Jaguars to 78 yards rushing and 3.4 yards per carry. Granted, Jacksonville was without Maurice Jones-Drew, but they still boasted the third best rushing offense in the NFL matching up against a run defense giving up 4.8 YPC. No matter, the defensive line overpowered the Jaguars blockers, playing a vital factor in stopping Rashad Jennings. Carriker, Holliday and Bryant led the way with a combined ten tackles and a sack.

Their success made life easier for a linebacking corps, which has been unable to grasp the complex 3-4 scheme implemented by Jim Haslett all season. With the Jacksonville offensive line occupied with the resurgent Redskins front, London Fletcher, Rocky McIntosh and Lorenzo Alexander all played markedly better. And I can't leave two of the lesser known entities at linebacker out either.

Rob Jackson, in his first game action of the year, filled in for Brian Orakpo and not only did a passable job, but was instrumental to a Washington win. Jackson had a sack and forced a fumble while also establishing himself as fixture in the Jaguars backfield. Fellow linebacker Chris Wilson didn't show up on the stat sheet, but in overtime he came surging through the middle to force an errant David Garrard pass that was picked off by another youngster in Kevin Barnes.

Barnes's interception capped a busy day in which the second-year pro played safety and cornerback after the Redskins were without three safeties and Carlos Rogers. He didn't stand out for much of the day, but his interception led to a winning field goal by none other than boy wonder Graham Gano.

While the embattled Redskins kicker won the day, wide receiver Terrence Austin finally recorded his first NFL catch, converting what was, at the time, a big third down late in the fourth quarter with the score tied. Of course, the Redskins might have avoided the tie game altogether had they simply entrusted more carries to next year's number one running back Ryan Torain, but when has Kyle Shanahan ever wanted to run the ball?

The bottom line is that we discovered the Redskins have some talent stashed behind what they considered to be their starting lineup heading into the season. Five of the starters on defense today differed from the opening day 11, while the offense trotted out Torain and Rex Grossman rather than Clinton Portis and Donovan McNabb. The 5-9 Redskins, on a four game losing streak, beat the 8-6 Jaguars who were scrambling for a playoff berth. Welcome to the NFL. 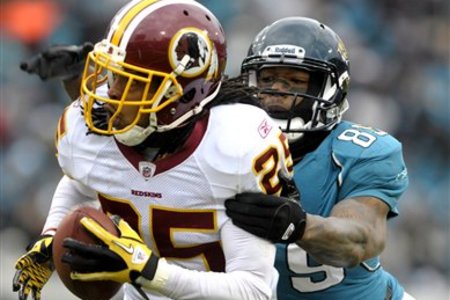 What does all this mean for the future? This season, Shanahan has dug up several core players for 2011 and beyond, but which ones represent that future?

We all agree Brandon Banks and Anthony Armstrong were fantastic finds and will contribute next year. If Torain can stay healthy, he'll also fit into the Shanaplan. No matter the down and distance, he runs with a furious energy most backs don't possess. Is he unrefined? Yes, but he is in the very least a suitable workhorse until Washington has a line in place. He can rip off 10-yard runs like it's his job (which it is) and his 4.7 YPC behind a line this woeful is certainly noteworthy.

Austin was the Redskins seventh-round pick this year from UCLA. He might be undersized, but he has consistently displayed good hands, a desire to learn and the ability to be a slot receiver in the NFL. He can also return kicks, making him a great all-purpose player who will work hard to make a difference wherever he plays.

Gano, who hit the game-winner in the UFL championship last year, might have the lowest field goal percentage in the NFL among regular placekickers, yet he has made three overtime kicks and won the Lou Groza Award as the nation's best kicker while at Florida State. Shanahan has been patient with him and rightly so considering his resume. Gano is a young kicker with a lot of potential and it would be foolish to cut ties with him after a season no rockier than the rest of the team's.

The Redskins stole Carriker, a former first-round pick, from the Rams this past offseason, and he has been the most consistent defensive lineman on the team this year. On a defensive line in need of a significant upgrade, Carriker is the one guy Shanahan would like to have back here in 2011.

The Redskins secondary will be a strong point next year with the return of LaRon Landry. Free safety may be an area of concern, but everywhere else Washington is very solid. Barnes can once again provide quality depth or even assume the nickel role at corner if Carlos Rogers decides to depart via free agency. He has embraced a jack-of-all-trades role in the second half of the season and will see increased action if he continues making plays like his interception this week. He can tackle and is improving in coverage, meaning his development into a big, physical corner is well underway.

As for Jackson, he will receive special attention after a terrific day rushing the passer. He spent the bulk of the year on the practice squad and then on Sunday had everyone scratching their heads as to why he was left off the final roster. His impact was felt throughout the game, as he pressured Garrard constantly, and at one point he received the "Orakpo-hold" treatment from Eugene Monroe.

Shanahan has plenty of to deal with this offseason when it comes to Albert Haynesworth, McNabb, Portis and other older players who will be hitting the free agent market. Obviously the public eye will be focused on those situations and with good reason since that's where the drama is at. However, buried deep on the roster is the future of the Washington Redskins. The Torains and Carrikers and Armstrongs represent a younger, healthier brand of football, which the franchise desperately needs. On Sunday, we saw what that brand can do.

If Mike Shanahan witnessed the same thing, you can bet your season tickets the Redskins will be making some changes next year. 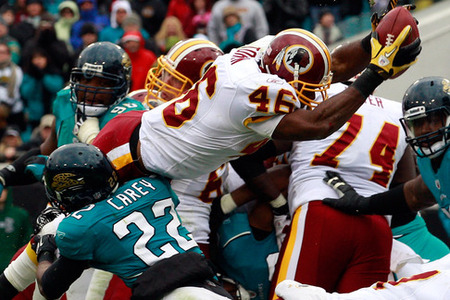