Chain Reactions: The Washington Redskins' Patchwork Defense Gets It Done

The Redskins could have been a playoff team this year if they had eight more overtime games. The Redskins improved to 3-1 in the extra session this year in a 20-17 win at Jacksonville.

Share All sharing options for: Chain Reactions: The Washington Redskins' Patchwork Defense Gets It Done

On an afternoon where Jacksonville had everything to play for, it was the Redskins who came out on top thanks to an undermanned defense that made plays and an offense that did just enough. Even kicker Graham Ga-NO (Ga-Yes) came through in the extra session and his foot kicked Rex Ryan's Jets into the playoffs.  I bet Rex liked that ... not Gano's foot, but that it got the Jets in the playoffs.

The Redskins  scored on one of the first two possessions of the game for just the third time in 15 games, and their 10-0 lead was the biggest to start a game since they led 14-0 at Philadelphia in Week 4. The Redskins, who have been a bad first-quarter team, enjoyed a 10-0 lead after the first quarter.

D Gets an A

Sure, the Jaguars were playing without Maurice Jones Drew, but who were those guys playing defense for the Redskins? The Redskins were playing with six new starters, yet they had constant pressure all day long on David Garrard, sacking him four times and picking him off twice. How good of a day was it defensively? Carlos Rogers picked one off which set up the Redskins' first touchdown.

Rob Jackson, who just up from the practice squad, was a force with constant pressure and was officially credited with a sack, quarterback hurry and a forced fumble. Also, Kevin Barnes turned in a big play with the overtime interception that set up the game-winning field goal.

Offense Back to Normal

A week after the Redskins' offense put up gaudy numbers in the loss at Dallas, they returned to their usual form.  Third-down efficiency was a disaster, as they were just 4-15. Rex Grossman was just 19-38 for 182 yards, a touchdown, a 60.0 rating and a questionable interception (see below). Rushing was not much better, as the Redskins got only 74 yards. Dropped balls were an issue again, as Chris Cooley had at least three drops.

For the record, the Jaguars are not good defensively, ranking just 28th against the pass and 18th against the run. However, when the Redskins needed a drive, they got it early in the 4th quarter with a 14-play 68-yard drive that ended with a Ryan Torain touchdown run on a fourth and goal.

The rap on Rex Grossman has always been he is not consistent enough. Sure, he can make plays and has a strong arm, but his decision-making varies from week to week and sometimes play to play. On Sunday, his quarterback rating was a 60.0 against a bad Jaguars defense. This performance comes a week after a 93.4 rating in the loss at Dallas.  It would be shocking if the Redskins didn't draft a quarterback in April's draft. Maybe they'll try to grab one from Philadelphia again.

A Day without McNabb/Shanahan Drama ... almost

Thankfully Sunday was drama free on the McNabb front ... well, sort of. There was the story saying he would ask for his release, but would anyone blame him if he did? He knows he has no future with the franchise. McNabb denied the report was true.

Rex Grossman was bad, but maybe not that bad? 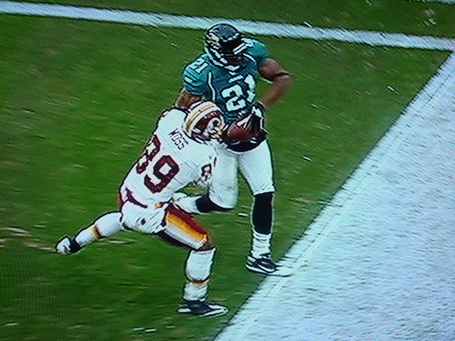 However, we never got to hear from Fox's official in a box Mike Pereira on the call. It would have been fun to hear him spin for the guys in stripes.

The Jaguars came into Sunday's game with plenty to play for, but it was hard to tell with the way they played. They had too many penalties (seven) and turnovers (two) for a team fighting for the post season. They also showed ZERO urgency against a Redskins team that played with 11 new starters from opening week.