Have The Washington Redskins Really Changed The Culture Under Mike Shanahan?

The Redskins were supposed to undergo a rebirth this year. It's not happening. The losses are mounting and now the locker room seems no better off than when Mike Shanahan arrived. Is this what we wanted?

Share All sharing options for: Have The Washington Redskins Really Changed The Culture Under Mike Shanahan?

Things are certainly souring quickly on this new era for the Washington Redskins under Mike Shanahan. A pair of early season wins over Green Bay and Philadelphia brought hope that Shanahan and Son were turning the page on a decade's worth of futility in the nation's capital. However, a loss in Detroit and a beatdown at home against the Eagles on Monday Night Football quickly sent expectations out the window. It's only gotten worse after a pair of gutless defeats in the past two weeks. Anyway you spin it, it's the same old Redskins.

Shanahan's grace period won't last long after his Redskins dropped their second consecutive divisional game in blowout fashion to the New York Giants 31-7. They were outplayed in every facet of the game from start to finish, and minus a swinging gate play to end the first half, it wasn't much different than last year's shellacking under the much-maligned Jim Zorn.

In fact with each passing week, I'm having a hard time distinguishing between this year's Redskins and last year's. No, I didn't expect a magical Super Bowl run out of this team, but I did hope to see a solid effort put in every time Washington took the field. Instead I have a terrible feeling the Redskins haven't been emotionally invested in a game since before their bye week. Again, let me reiterate: I don't mind the losing. It's just the way the team has been losing which stings. The culture simply hasn't changed like we were promised, and that's what hurts. 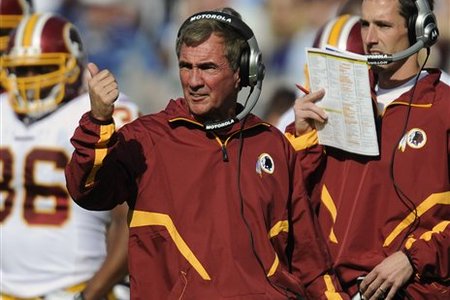 We were promised a new brand of football where the team would play 60 minutes and take pride in their performance. I'm not seeing that from these guys. The down and out mentality the franchise claimed to have cast off is still present and seems to have eaten at the very core of a once-proud organization, regardless of the changes.

It's easy to point fingers amidst the carnage, but I think the situation runs deeper than the mismanagement of Dan Snyder, the micromanagement of Mike Shanahan or the cardiovascular endurance of Donovan McNabb. Obviously, none of those problems have benefited the Redskins, but they don't quite touch the heart of the matter. The simple truth is that many of the core players on this squad just don't know how to win anymore.

One or two wins can't erase the memories of seasons worth of mediocrity from players like Santana Moss, London Fletcher, Rocky McIntosh, Carlos Rogers, Chris Cooley and others. A few devastating losses will swiftly bring those memories back to the forefront. Many players on the roster are incapable of sustaining success on the football field for a full season, and after losing to the lowly Lions for the second straight season, they lost confidence.

Of course, the Redskins as a whole aren't very good, but you can't name another team who manages to make more untimely errors than Washington. And it isn't just one or two players - it's an epidemic plaguing anyone and everyone. False starts turn third and shorts to third and longs, missed passes by McNabb, dropped passes from numerous receivers when McNabb does deliver on target, missed tackles, over pursuit from the linebackers and the list goes on. The inconsistent play is found from top to bottom, from the opening kick-off to the final gun. The Redskins don't believe in themselves and the countless self-inflicted wounds attest to their lack of faith in themselves and the system.

Shanahan was brought in to change the attitude of this football team and thus far he's done a poor job in that respect. His dictator-like approach to the head coaching position has backfired more than once, and you could make the case the Redskins have quit on him. While that isn't likely to get him fired like Zorn, it will certainly put him on a shorter leash with the impatient Snyder. 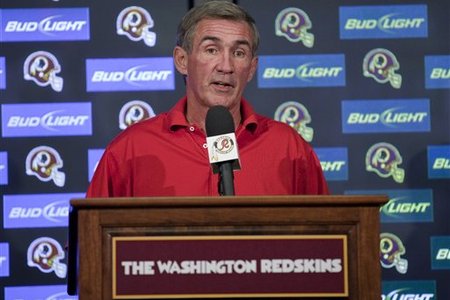 In his defense, these aren't Shanahan's guys. He's inherited a veteran team with a lot of players who won't be here in the next one to two seasons. The next month ought to give him a good idea of who he wants playing for him in 2011 and beyond, and there's little doubt he'll place a premium on younger players who can mature within his culture.

Take for example Brian Orakpo, who displayed his displeasure quite vehemently on Sunday in New York. After the defense came off the field following another Brandon Jacobs touchdown run, Orakpo stormed off the field yelling and kicking equipment on the sidelines in a flash of passion rarely seen on the Redskins bench.

Perhaps it wasn't the most subtle way to show frustration, but Orakpo illustrated that he's a player who cares. He wants no part of the culture of losing and won't stand idly by to go down with the ship. Others such as Anthony Armstrong, James Davis and Brandon Banks are also players who have yet to be indoctrinated in the Burgundy and Gold school of defeat. Those players are the future, and it is imperative they don't adopt the downtrodden mentality of their elders.

The next month is crucial in that the Redskins need to prove to themselves they are able to indeed change the culture in the locker room, because thus far they haven't. They could go 5-11 and it wouldn't matter to me so long as they play with intensity. Just no more lackadaisical, half-hearted efforts. Prove Rodney Harrison wrong and come to work with character.

Honestly, if they can't have the decency to show up and legitimately play 60 minutes of football, they won't have learned anything from this season.