Albert Haynesworth Suspended: Forget The Blame Game, What Lessons Can Everyone Learn?

Albert Haynesworth has been suspended, and his Redskins career is likely over. Instead of deciding who is to blame, let's figure out what lessons the relevant parties can learn from this going forward?

Share All sharing options for: Albert Haynesworth Suspended: Forget The Blame Game, What Lessons Can Everyone Learn?

When it comes to Albert Haynesworth's suspension, everyone is going to ask everyone whether they are on Team Haynesworth or Team Shanahan. Is it right to blame Haynesworth for symbolizing everything wrong with the modern athlete, as Sally Jenkins decided to do in a vicious column full of venom? Is it right to instead blame Mike Shanahan the egomaniac who turned one of the most dominant assets in football into chump change, like Kevin Blackistone did in an equally vicious column? What about Dan Snyder and Vinny Cerrato and Jim Haslett and Phillip Daniels and Greg Blache and the rest of the Redskins' defensive line? Don't they deserve blame too? Who really deserves the blame? Blame blame blame blame blame.

Me? I'm on Team Redskins, and I don't really care who is to blame. All I know is that this team is failing and the guy they gave a record contract to be a dominant player has instead turned into the biggest free agent bust in a decade full of them. Something like this can only happen if there is a spectacular failure on the part of everyone involved. Everyone, from the intern working in the marketing department to Haynesworth and Shanahan themselves, needs to do some soul searching and figure out what truly is the best way to get this once-proud franchise back on track.

To do that, we need to change the rhetoric of this conversation. Instead of talking about who is to blame, let's begin to talk about what everyone can learn so something like this never happens again. Instead of trying to decide who is right, let's begin to talk about what is right. Instead of trying to fix things with yet another move that's good for PR, let's begin to figure out a long-term solution to fix this franchise. I disagree with pretty much everything Brian Mitchell said on the radio yesterday, but I can empathize with his frustration. We've been distracted by, well, distractions for too long. It's time to learn from our mistakes.

What lessons can everyone involved learn from this? Here's a short list: 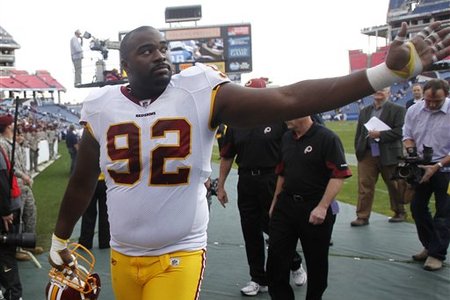 1.  You can't have it both ways: I get it - this wasn't a team that fit your skills best. But if that's the case, turn down the $21 million in April and go elsewhere. If you decide to take the money (and I would too), then make more of a good-faith effort to figure out a defense you admit you're "not good at." Pick one or the other.

2.  Understand that new regimes happen: Haynesworth's biggest gripe throughout this whole process is that the Redskins paid him to be something that his coaches don't want him to be. That may be true, but the reality is that this isn't the regime that gave you that huge contract. Directing your ire towards management falls on deaf ears, because they had nothing to do with any promises you may have been given.

3.  Mike Shanahan may be a hardass, but he's a hardass to everyone: Say what you want about Shanahan: he's consistent. Haynesworth is hardly the only starter that has reason to complain about his role. Derrick Dockery went from starter to non-factor, and Devin Thomas is on another team. The players all know that Shanahan may be rigid in his approach, but they adjusted. Haynesworth didn't.

4.  You're not the only one that had to adjust to the 3-4: This defense was new to everybody, and yet, they all tried their best without complaining. Andre Carter, for example, had a career year last year playing in Greg Blache's 4-3 scheme, and the team responded by trying to make him a linebacker. Yet you didn't hear him complain publicly about the situation like you did. This is probably why Carter said, simply, "the drama is over with," as if he's going out to have a beer to celebrate.

5.  You overplayed your friendship with your teammates: Haynesworth probably believed he would win sympathy from his teammates because they're all friends with him. But what Haynesworth failed to realize is that players want to succeed, first and foremost. If you're not helping your team succeed, all the friendship in the world doesn't mean anything. With a 5-7 record, it's no surprise that most players didn't take his side.

1.  Public embarrassment helps nobody: It's clear now that Shanahan's decision to set up a conditioning test for Haynesworth in training camp that really wasn't a test at all was a poor decision. The intention was to prove that Shanahan was in charge, but the players knew that already. That's why all of them, save Haynesworth of course, had nearly perfect participation in OTAs. They already respected the guy. So there was no need for Shanahan to make a public demonstration of his power by making an example of Haynesworth. It only served to prolong a distraction that is only now going away.

2.  You can't change everybody: Shanahan likes to tell tales of how he's shipped talented players out of town and made it work with less talented guys who wanted to listen, but since winning two Super Bowls with John Elway, Shanahan hasn't exactly had a great deal of success. Hopefully this is a lesson that you may need to make some compromises to win in this league.

3.  You can be a hardass and still reach Haynesworth: Would anyone confuse Jeff Fisher for a softie? Does anyone really think Fisher isn't a tough-minded guy that is willing to stand up to players? Just ask Vince Young, who has felt Fisher's wrath for possibly the last time. The scheme was a major reason why Haynesworth succeeded in Tennessee, but a lot of it was Fisher's management of Haynesworth too. Perhaps Shanahan should have tried to solicit some advice from Fisher on how to get the most out of Haynesworth instead of assuming it couldn't happen.

1.  You're never one move away in football: I'm guessing you've started to learn this, but giving a defensive tackle that much money, even one much more motivated than Haynesworth, doesn't alone solve your team's problems.

2.  Again, don't give a guy like Haynesworth that much money: Just repeating it for effect. 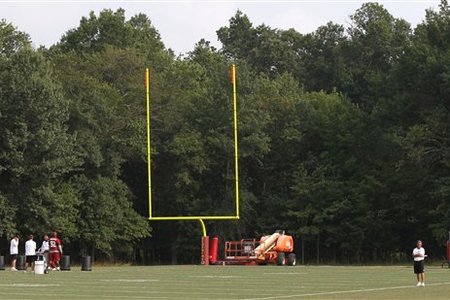 There are more lessons to be learned for sure, and I'm curious to know what you all think they are. But regardless, it's time to move forward and stop playing the blame game.