From Kwame Brown to Devin Thomas, there have been plenty of blunders by Washington teams in the draft in recent memory. Here's our look at the worst of the worst from the last 11 years.

The Albert Haynesworth saga and Jayson Werth's exorbitant new contract have given us all reason to stop and think about the perils that come with signing premier free agents. In an open market where teams have to compete with one another for someone's services, the team that bids the most for a player's service is also the one that overvalues the player the most. That's just the harsh reality of free agency.

The only way to avoid the madness that leads to these disastrous deals is to nip it in the bud through the draft. Acquiring talent through the draft and locking up the right players to fair deals once they've proven their worth is the fastest and most cost-efficient way to build a healthy franchise. Almost every top-tier team in each league has followed this path to success.

When we see overpaid free agents flop, in many ways, it's just as much of an indictment of a team's inability to draft as it is of their ability to sign players to fair value on the open market. When teams can't draft the right players, they have to pay through the nose in order to cover up their mistakes. With that in mind, let's take a look back at some of the biggest draft misses since 2000 that have in part led to some of these disastrous contracts.

(In the sake of fairness, we're only going to focus on times when teams missed on a better player at a similar position. For example, it's easy to criticize the Redskins for passing on DeMarcus Ware to draft Carlos Rogers, but it ignores that the team had some good depth at linebacker and needed someone to who could close off one half of the field. In hindsight, the Redskins probably would have done it differently, but at least they didn't pass on a more successful cornerback). 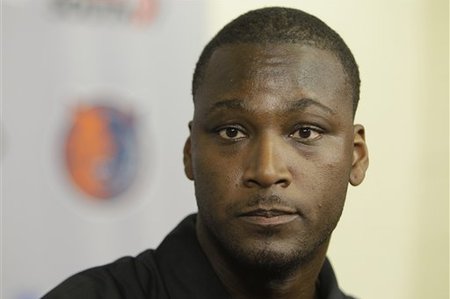 At the time of the draft, most Wizards fans were upset that the Wizards gave up on the chance to draft Spanish sensation Ricky Rubio, and while that regret may still play itself out once Rubio makes his way to the states, there's still reason to be upset about this move. Only two picks later, the Warriors took Stephen Curry, who almost outproduced the Foye and Miller singlehandedly in his rookie season.

If the Wizards were truly close to contention, perhaps this trade would have been worth it, even if they let go of a shining prospect like Curry. However, given the Wizards' struggles that season, and all the warning signs that led up to it, this has to go down as one of the bigger mistakes the Wizards have made since 2000. The only comfort this trade gave was that it shed the contracts of Etan Thomas and Darius Songaila, which made it easier to rebuild once the Wizards imploded.

The blunder most people cite from this draft is the Wizards choosing to go with Oleksiy Pecherov instead of Rajon Rondo in the first round, but as I said earlier, we're not here to compare players at different positions. At the time, the Wizards had Gilbert Arenas entering his prime and Antonio Daniels was one of the better backups in the NBA. There simply wasn't a need for Rondo at the time. It was an understandable, if regrettable, decision to make.

The bigger flub came in the second round when the Wizards selected Vladimir Veremeenko out of Belarus. The plan was to stash him in Europe to continue his development until he was ready to make an impact, just like Pecherov. Problem is, he was never able to develop into an NBA level player. Other than some playing time with the Wizards' summer league team a few seasons ago, he never got a chance to play with the team that drafted him.

While Veremeenko struggled, the next pick in the draft, Leon Powe, became an immediate contributor with the Celtics. In his second season, he was a key cog off the bench for Boston as they won the NBA Finals. Although a knee injury sidetracked his career the next season, he got through the long recovery and continues to be an effective insider scorer for Cleveland off the bench. 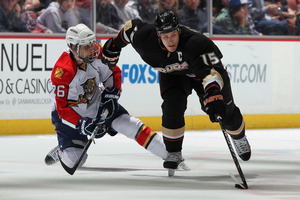 George McPhee hit it big in the first round of this draft, picking up Alex Ovechkin, Jeff Schultz and Mike Green. He didn't have quite the same luck in the second round. The Capitals' first pick in the second round, Chris Bourque, didn't pan out, though at least he had some NHL playing time, which is more than the four picks after him in the draft can say.

The bigger miss came late in the round when the Capitals drafted Mikhail Yunkov. With the next pick, the Bruins took David Krejci who led the NHL in plus/minus in 2009 and already played over 200 NHL games at the age of 24. Yunkov turns 25 in February and still hasn't played a single minute in the NHL.

2003: Anaheim picks up Ryan Getzlaf one spot after the Capitals pick Eric Fehr

If you think the Capitals are an offensive juggernaut now, just imagine what they could have done with Ryan Getzlaf on the roster. The two-time All-Star was still on the board when the Capitals selected Eric Fehr with the 18th pick in the draft that year. With all due respect to Fehr's accomplishments, no one can make the argument that the Caps would have been worse off without Ryan Getzlaf, unless you think the Capitals would have morphed into the Miami Heat with all that talent at their disposal.

Cutta only played 108 minutes with the Capitals over three seasons, spending most of his time in the AHL before signing to play in the Czech Republic in 2006. By that time, Martin had already been named to the U.S. Hockey team for the Turin Olympics and become a key cog for some stellar New Jersey defenses over the years before joining the Penguins during the offseason.

Mark Zuckerman has done an excellent job chronicling the ups, and mostly downs of Ross Detwiler's time as a National. While there's still time for him to deliver on the promise that made him the sixth overall pick in the 2007 Draft, it's becoming clear he probably won't be exactly what the team hoped he would be when he was drafted.

Worse yet for Detwiler, Madison Bumgarner is three years his junior. Not only did the Giants get the better pick for the present, but one that will continue to look better with time. 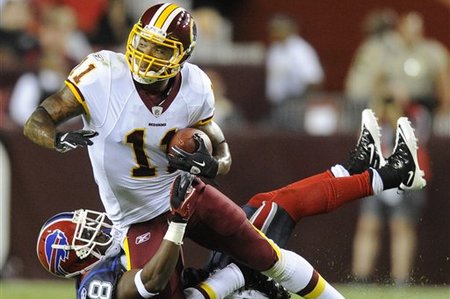 Thomas became somewhat a martyr of sorts during his final days as a Redskin, but no one will ever think he had a shot of matching the performance of the Eagles' stud receiver and returner. The sad thing is, the Redskins actually had two shots to land Jackson, but decided to bolster the tight end position (where they already had a Pro Bowler) and take Fred Davis with their second pick.

At the time, this move made plenty of sense. Joe Gibbs had just made his return, and he needed a veteran quarterback to turbo charge his takeover. And to Brunell's credit, he did give the Redskins the stability they were looking for when they traded him. However, if the Redskins had held onto that pick, they could have taken Matt Schaub, who still would have been available with the pick the Redskins gave to Jacksonville.

Instead, the Redskins opted for the win-now move and wound up having to build for the future anyway. The very next year, the Redskins gave up three picks in order to draft Jason Campbell as their quarterback of the future. By the time Jason Campbell was ready to take the helm, late in 2006, Schaub would have already had some NFL experience under his belt if he had been selected by the Redskins. Plus, he would have some extra support that would have come from the extra picks the Redskins wouldn't have needed to give up to get Campbell.

Instead of using one pick to build for the present and future with Matt Schaub, the Redskins wound up using four picks to take two quarterbacks who were not able to match what Schaub has done with the Texans. But don't worry Redskins fans, there's a worse move that sacrificed the future for the present on the way.

2003: The Ol' Ball Coach Takes A Gator Ahead Of A Seminole

Steve Spurrier loved his Gators, which certainly had to play a role in the Redskins' deciding to take Taylor Jacobs with the no. 44 overall pick in the 2003 Draft. Like Shane Matthews and Danny Wuerrfel before him, Jacobs talents didn't make the journey with him from Gainesville to Washington. Jacobs only caught 37 passes and one touchdown during his three seasons with the Redskins.

By the end of his sixth game as a pro, Florida State alum Anquan Boldin had already racked up 39 catches and two touchdowns en route to being the offensive rookie of the year and a Pro Bowler. Boldin was taken by the Cardinals with 54th pick, so the Redskins weren't the only team to pass on the chance to draft the three time Pro Bowler. But there will always be room to wonder if the Redskins would have taken Boldin with the 44th pick if they weren't trying so hard to rebuild The Swamp at FedEx Field.

2001: Redskins draft Rod Gardner one spot ahead of Santana Moss

Whenever someone tells you that there are no mulligans in football, just remember this draft. Sure, it may have taken four years and enough drops to fill a bucket from Rod Gardner, but eventually, the Redskins got it right when they acquired Santana Moss.

In the spring of 1999, the Redskins had a need for some signal callers. Trent Green had signed with Rams, Gus Frerotte had taken his talents to Motown. The Redskins had brought in Brad Johnson to be the starter, but they still needed a backup. To fill the void, the Redskins sent a sixth round pick to Philadelphia for the veteran Rodney Peete. He wound up completing 8 of his 17 passes and throwing for 107 yards that year and was released in the offseason.

With the pick no. 192 in the 2000 Draft the Eagles received in the trade, they selected center John Romero. Eleven picks later, the Redskins selected quarterback Todd Husak with a compensatory pick they received. In between those two forgettable selections, the Patriots wound up taking Tom Brady, a mere three spots ahead of Husak.

If the Redskins had simply held on to their sixth round pick, they would have had the perfect opportunity to draft Brady with the pick they sent to Philadelphia. After a year behind Brad Johnson and Jeff George, he would have been in prime position to take over as the starter once Jeff George and Marty Schottenheimer had their falling out early the next season. Instead, we're left to wonder how many poor Redskins signings could have possibly been averted if they had not gone for the quick fix, the same was every team has tried to unsuccessfully rise to prominence at one point or another since 2000. 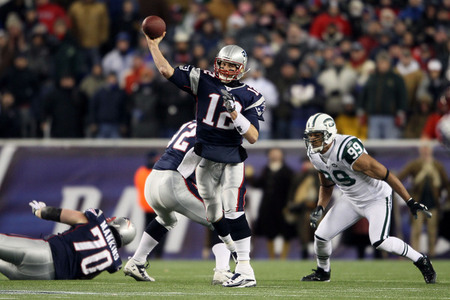