Calling a timeout to ice a kicker on a game-winning field goal? That's pretty cold, bro. But it's not the first time Washington has been on the wrong end of some icy moves.

Share All sharing options for: The Worst Icings In D.C. Sports History

Autumn may have just started yesterday, but we've already gotten a taste of the harsh, winter air thanks to Gary Kubiak's timeout that iced Graham Gano before he missed a potentially game-winning field goal in overtime on Sunday. It may be little consolation, but this isn't the first time Washington has been hurt by icing. A look back at D.C.'s sports history reveals some painful memories involving icing.

No. 5 - Gilbert Arenas ices himself for his birthday

Do you realize in the three and a half years that have passed since Gilbert Arenas' wild birthday party where he had an ice sculpture made of himself, he's only played in 90 games? He's had almost as many knee surgeries (3) as 40 point games (4) during that span. Blaming the ice sculpture for his woes would be silly, but if nothing else, the ice sculpture represents the peak of Arenas' fame and its rapid melt during the party foreshadowed a quick fall from grace in the coming months as he became more known for his quirky quotes and actions than he did for his play on the court, which has become less and less frequent since that night.

No. 4 - Michael Jordan icing his knees

This wasn't an event as much as it was standard occurrence during Jordan's time with the Wizards. Every time Jordan was catching a breather, you could be sure His Airness was getting some ice for those creaky knees. The sight of Jordan on the bench with those ice packs wrapped around his legs doesn't invoke the pain that some of the other icings on this list might, but it serves as a painful reminder that the MJ Washington got to watch in the twilight of his career wasn't quite the same Jordan Chicago fans got to enjoy years before. 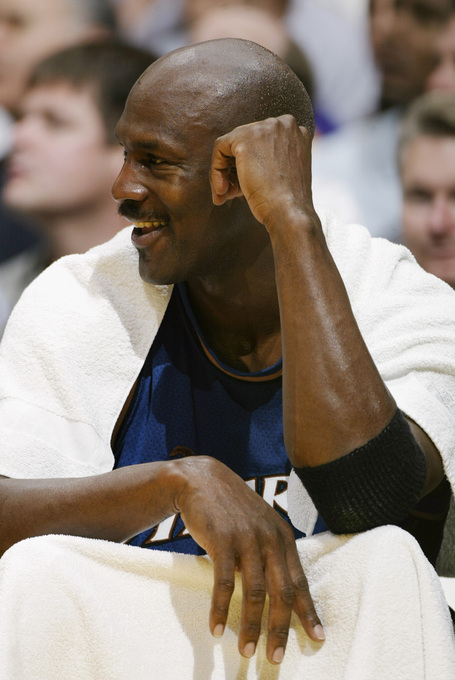 Pat Peake's promising career with the Capitals was cut short when he injured his heel against the Penguins in the first round of the 1996 Stanley Cup Playoffs. Peake wasn't the victim of a vicious hit during their physical series with the Penguins, his injury was caused by him trying to prevent -- you guessed it -- an icing call:

Now 33 and an employee of Newport Sports Management in the Detroit area, Peake has become the poster boy for an obscure but heavily debated rule change, one that has been adopted at just about every level of hockey - save for the NHL.

A superstar in junior hockey - he was named the Canadian Hockey League player of the year in 1993 - Peake was chasing down a puck, trying to beat an icing call during the 1996 playoffs when he tripped and collided feet first with the end boards, shattering his right heel. Doctors claimed they had seen an injury of similar severity only in construction workers who had fallen from high rises.

I'm pretty sure most of you remember what happened here, if not, you can catch up on the debacle here. Though it may not be the biggest gaffe in NFL history, but I can't think of a bigger one involving the word icing.

In terms of importance to a team's season, this icing has to be the worst. The Wizards were up by a point in the closing seconds against the Cavaliers and Gilbert Arenas was going to the line for two free throws that could help force a Game 7. Make both, and the Cavaliers would have to hit a three-pointer to force a second overtime. Make one, and the Cavaliers still have to find a way to make a shot to force a second overtime or take their chances going for a dagger three.

The only way things could go wrong is if Gilbert Arenas missed both free throws. Thankfully, Gilbert Arenas was shooting 82 percent from the stripe that season, so there was no need to worry, until LeBron James injected himself into the matter.

The Wizards were nursing a one-point lead when Cavaliers guard Larry Hughes fouled Arenas, sending his friend to the free throw line. Arenas's first attempt bounded around the rim and he dropped his head in disbelief. Cavaliers star LeBron James walked up to him afterward, patted him on the chest and told him, "If you miss both of those free throws, the game is over."

Arenas didn't even acknowledge James, but he still looked distraught as he prepared to take his second shot -- which was even more off, clanking off the back of the rim. "That's something I would say," Arenas said, laughing about James's attempt to jinx him. "An 80 percent free throw shooter and you miss two. The basketball gods weren't with us in this series."

Say what you want about LeBron's playoff performances over the last two years and his overall attitude, but his icing of Arenas in Game 6 was as cold-blooded as it gets.