The Redskins hit the road this Sunday to square off against the St. Louis Rams and rookie Sam Bradford. Washington's defense may look lowly on the stat sheet, but there's more to this defense than the numbers suggest.

Share All sharing options for: Redskins Vs. Rams: Five Keys To A Washington Win, Featuring 'Rookie Hazing' Of Sam Bradford

The Redskins have played in just two games this year, but they've already had to deal with a wide array of X's and O's and highs and lows. The week one win over Dallas sent Washington soaring despite the uneven, sloppy play throughout the game. Donovan McNabb posted pedestrian numbers and the defense won the day as Washington somehow clung to a hard fought victory. However, the Redskins came crashing down in a shootout with Houston last week. The game against the Texans might have been easier on the eyes, but the Redskins will take an ugly win over blowing a three score lead any day.

This week, the 1-1 Redskins travel to St. Louis to take on the Rams for the third straight year. Washington should cruise in this game, but we all know the Redskins struggle to score more than nine points or so whenever they play the Rams.

If I'm Mike Shanahan, I want to win decisively on Sunday. A convincing win would tell me the Redskins mean business and possess the killer instinct necessary to not only avoid losing a "trap" game, but to win it in style. The Rams have a new rookie quarterback and the 28th-ranked defense in the NFL. No disrespect, but they aren't in the same league as the Redskins this year. Washington needs to win this game in the first half, keep the foot on the pedal, and finish the game off in dominating fashion.

Here are the keys to making a beatdown in St. Louis a reality. 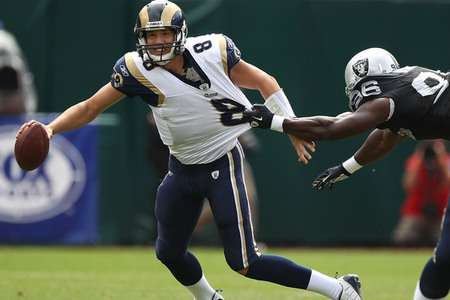 Sam Bradford will be making his third start as a professional quarterback on Sunday. He is 46-80 for 420 yards, three touchdowns, and four interceptions. He has a completion percentage of 57.5 percent and has been sacked five times. The numbers aren't too shabby for a rookie, but the Redskins pressure-happy 3-4 scheme will be a bit more complex than what Arizona or Oakland put on display.

Washington is 32nd in total defense, but that is due to the 500 yards Matt Schaub passed for last week. The Redskins contained Schaub until the final quarter and half without starting free safety Kareem Moore playing due to an injury, but eventually Schaub began to exploit Reed Doughty.

The Redskins are going to struggle defensively this year. They are transitioning to a new defense and they don't have the right personnel across the board to play it exceptionally well. Yet we saw last week Washington can get pressure on the quarterback. They sacked Matt Schaub five times and hurried him constantly. Schaub managed to overcome the rush with an unflappable demeanor in the second half; something I don't expect to see from Bradford.

Jim Haslett brings the rush from any and every angle. Last week London Fletcher, LaRon Landry, Brian Orakpo, Lorenzo Alexander, Adam Carriker and Vonnie Holliday all got to Schaub. Players from four different positions recorded sacks as Haslett brought pressure from the middle, the edge, the secondary, you name it.

Bradford will have a tough time reading the blitz packages and the Redskins will benefit if they keep them up all game long. 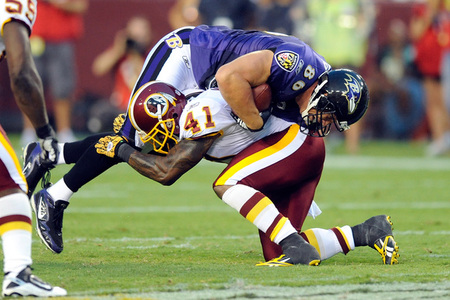 As aforementioned, Kareem Moore missed last week's game with a knee injury, but should play against the Rams. Moore might possess the best ball skills of any member of the Redskins secondary. He has a nose for the pigskin and his athletic ability is far superior to his replacement, Doughty. The Redskins need Moore badly, but they also can't rush him back too quickly.

It's a fine line when it comes to returning from a knee injury. Moore was clearly frustrated when his strong preseason came to a premature end against Baltimore and if he wants to make an impact in 2010, he must make sure he doesn't re-aggravate the injury by coming back too soon.

With these concerns in mind, Moore is widely expected start next to LaRon Landry this week. What we will see is a more effective, athletic secondary that will disguise certain coverages and play more aggressively at the line of scrimmage. Washington feels much more comfortable leaving Moore as the lone safety rather than Doughty.

Doughty is more suited to playing close to the line of scrimmage. Moore is more natural in coverage and a better fit at free safety. The Redskins secondary is significantly improved the instant Moore returns to action. 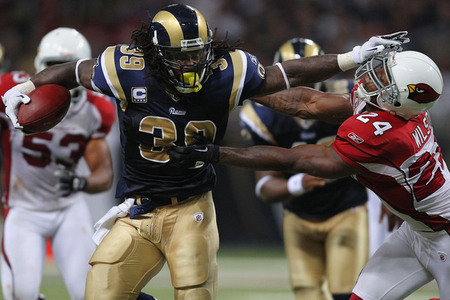 I ignored the obvious when I left Andre Johnson out of this past Friday's article. I was trying to avoid sounding generic, but I learned my lesson as I watched number 80 snatch victory away from the Redskins. So this week I will include the "gotta stop the star player" key.

Rams running back Steven Jackson has rushed for over 1,000 yards five times in his six year career. He also has caught nearly 300 passes since joining the NFL. Needless to say he is the sole constant offensively in St. Louis and the Rams will have to rely on him against the Redskins since Bradford will be facing some pressure.

The Redskins haven't particularly impressed me against the run thus far. I know they only surrendered 69 yards rushing to Arian Foster, but I don't like the way the defensive line gets pushed around. Houston's offensive line generated a nice surge and the Redskins had issues when it came to initiating contact with the ballcarrier at the line of scrimmage.

Jackson will eat up a soft run defense and if Washington can't stop him, the Rams might be able to control the clock and stay in the game. The Redskins will need to win the battles at the point of attack and prevent Jackson from getting to the second level of their defense. A strong showing from the defensive line should make life easy for the linebackers and tough for the Rams ground game. 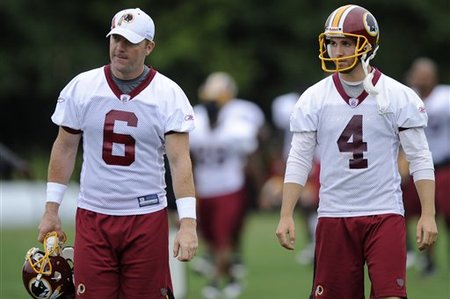 I know this team is better than last year's, but there have been several plays on special teams that make me question whether Jim Zorn is playing with voodoo dolls of Fred Davis and Josh Bidwell. A week after Bidwell fumbled away a snap on a field goal attempt, Davis missed a block on another attempt, leading to a blocked kick.

To make matters worse for kicker Graham Gano, Texans coach Gary Kubiak called timeout in overtime just before Gano nailed (and I mean nailed) a 52-yard game winner. The icing the kicker call worked as Gano didn't even come close on the second attempt as it sailed wide right.

I guess you can chalk it up to bad luck and mental lapses, but the grace period is over now. The special teams are out of mulligans and they must turn over a new leaf in St. Louis. Danny Smith receives a lot of praise for his work as special teams coach. Let's not have to question him again after this Sunday's performance against the Rams. 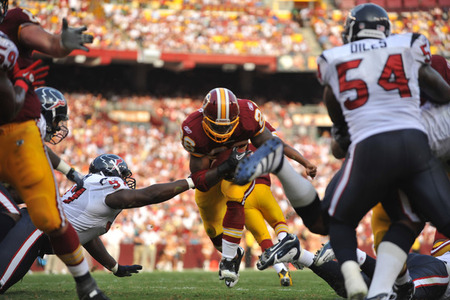 The Rams rank 30th overall against the run. Darren McFadden trounced them for 145 yards last week. Last time I checked Darren McFadden might not have even had 145 yards rushing in all of last season. It's now or never to get the running game untracked for the Redskins.

The Redskins are ranked dead last in rushing offense, but Clinton Portis isn't entirely at fault. The interior blocking on the offensive line leaves plenty to be desired and any back would have trouble finding holes to run through. However, when the holes are there, Portis is slow to hit them and he continues to fall into piles rather than churn his legs through them.

Portis isn't the same back anymore and it's showing early on in 2010. When it comes to running the ball, he relies on blocking to create space. Washington cut Larry Johnson this week and they lack the linemen to consistently provide that space for Portis, and so it's on his shoulders to make his own plays. Whether it's pushing the pile an extra yard or making a key cutback, Portis has to prove to himself and the offensive line he can contribute on the ground.

The Redskins will be sorry if they can't establish the run in St. Louis. Their newly-discovered passing game is fun to watch, but Washington won't win anything with just 18 yards rushing. We saw that first hand against the Texans, and be assured the Redskins intend to right the wrongs in the run game this week to set a different tone for the rest of the season.