What Went Wrong With The Washington Redskins' Defense In 2010?

What went wrong with the Redskins' defense last year? Former Redskins linebacker Ken Harvey talked to SB Nation D.C. are provided some answers to those issues.

Share All sharing options for: What Went Wrong With The Washington Redskins' Defense In 2010?

Surveying the final stats for the Washington Redskins defense this year, it was a struggle to take many positives from the NFL's 31st ranked unit. After finishing in the top 10 in total defense for three consecutive seasons, the Redskins ranked near the bottom of the league in every statistical category, far from a distinguished first effort from defensive coordinator Jim Haslett.

The defense initially masked their deficiencies by generating 18 sacks and 19 takeaways through the first half of the season. The second stanza was not so kind as they managed 11 sacks and a paltry eight turnovers while continuing to give up yards by the bushel basket. Brian Orakpo, perhaps the unit's brightest star, had 8.5 sacks on the year, but seven of those came in the first eight games. After an explosive start that left many believing he would be a defensive player of the year candidate, LaRon Landry missed the final seven games of the year with an Achilles injury.

Orakpo's drop-off in his second year as a pro is certainly a concern, as he has yet to blossom into the elite pass rusher Washington envisioned when they selected him in the first round in 2009. Obviously, he has plenty of time to bounce back from a miserable second half of 2010, but there are concerns about his compatibility in the 3-4 defense. He isn't strong against the run and wasn't nearly as effective as a pass rusher in a two-point stance than when he lined up as a defensive end in the 4-3.

I spoke with former Redskins standout linebacker Ken Harvey about Orakpo a few weeks ago. Would he be someone to build around defensively?

"In a 3-4 this is the reality: It's hard to build on an outside linebacker," Harvey said. "He'll be a playmaker, he can make things happen. But when you have a [3-4] defense, that defense is going to be built around guys who you don't know really that much about. It's being built around a strong nose tackle who's going to take up two or three people so the quarterback can't step up in the pocket. It's going to be built upon good [middle] linebackers who are dropping in the right coverage so that it's making the quarterback hesitate a little bit longer and then you have outside 'backers who can get to the quarterback.

"So a 3-4 I think is going to be built up on more of team," Harvey continued. "You have some stars on the team and I think Orakpo will definitely be a star, but the D-line is going to be a huge component of how successful that team can be." 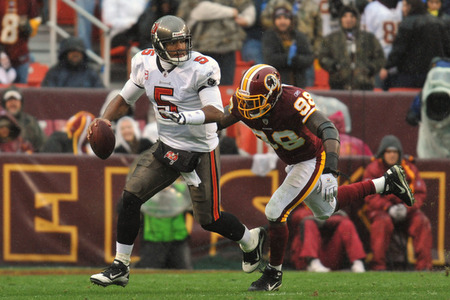 I can stress enough how much I agree with this. The defensive line surrendered 2,041 yards rushing at 4.6 yards per carry while recording a measly 11.5 sacks. The lack of production up front made life miserable for the rest of the defense.

We saw firsthand how ineffective Haslett's unit was without a dominant nose tackle to absorb that extra lineman or to provide penetration up the middle. When Orakpo's speed rush did get to the quarterback he could simply step up in the pocket without having to worry about an interior pass rush. A top flight nose tackle will change the dynamic on defense and is the true cornerstone for success in this 3-4.

Harvey believes they Redskins will try to upgrade the nose tackle position since the position is, in his words, an "issue" He also emphasized the importance of acquiring highly motivated players rather than signing marquee talent to big contracts, leaving them with little incentive to produce.

The mentality of a football team is so important in factoring wins and losses. A cohesive locker room has been hard to find during these tumultuous times in D.C., but to attain one would drastically alter the atmosphere of a team still reeling from distractions courtesy of the Albert Haynesworth and Donovan McNabb. However, the only way to achieve that level of commitment in the locker room is to fill it with extraordinary individuals blessed with character and passion.

One of the players who brings that approach to the squad for next year is Landry. He improved his tackling fundamentals and embraced his role at the line of scrimmage while rediscovering his playmaking abilities. The Redskins numbers dropped significantly without one of the toughest playmakers in the NFL, a further testament to just how crucial he is to the team in the future.

But aside from Orakpo, Landry, and a few others, the Redskins' personnel for the 3-4 has been questioned and rightfully so. Rocky McIntosh and Lorenzo Alexander seem to be poor fits as linebackers in the scheme. London Fletcher isn't getting any younger, and the free safety position next to Landry is a liability with Kareem Moore as a starter. Also, there's the aforementioned woes along the defensive line. 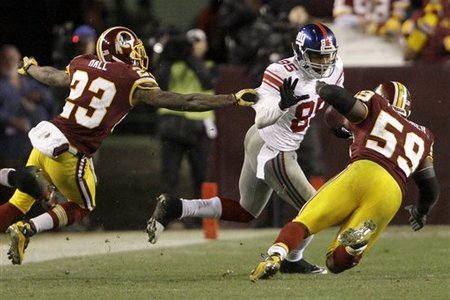 Despite the many shortcomings, Washington will need to take a measured stance this offseason when it comes to renovating the defense. There's little chance they can completely overhaul it in one offseason. The best method of improvement will require a two- or three-offseason makeover in which the defense is built through the draft and supplemented via free agency.

Time will not only allow Haslett to ensure he has the proper personnel to compete, it will also allow the Redskins to experience some much-needed stability within their organization. A consistent message on defense will lead to progress as attested to by Harvey.

"The defense will be in the second year of this new system so they will start understanding and getting the feel for what they [need to] do a little bit more. And they [can] adjust off of that," he said. "It will take until halfway into next year. Guys will work into it. But you're still seeing that some guys are playing out of position. You've got some defensive linemen now playing linebacker. That itself takes a year to adjust too."

Good things come to those who wait. For the Redskins, they best stay patient.