On the surface, there wasn't much to cheer about with the Redskins' 2010 season, but that hasn't stopped the players from being optimistic about the progress that was made.

Share All sharing options for: Washington Redskins Are Keeping The Faith On Both Sides Of The Ball

A common definition of faith is to believe strongly in a truth despite a lack of supporting evidence or facts. If that’s the case, then the Washington Redskins still have plenty of faith about future success going into the 2011 season.

The 2010 season is over, and the Redskins have finished in last place in the NFC East for the third consecutive season. Their offense has been inconsistent at best. They have statistically the worst defense in the NFL. But despite all of that, they couldn’t be more excited about the future, on both sides of the ball.

Offensively, if you take a look at some of the things the Redskins accomplished (or didn’t accomplish) this season, it’ll make you wonder what, if any, positives can be taken into next year. As Redskins fans and observers know, there are plenty of question marks going forward about the offense. How will the offensive line issues be dealt with? What will be the running back rotation? And most importantly, who will be the quarterback next year?

With so many questions, the players feel they will find the answers, in time.

"We can really be special in this offense that we have," Santana Moss said on Sunday. "I've been in a lot of offenses in the past six years [as a Redskin], and it's just that this offense fits what this league is about right now. Throwing the ball around and running when you can. When we get our stuff oiled up together we can really be explosive."

That’s a lot of confidence coming from a guy who doesn’t even know if he’s going to be in D.C. next season.  Moss wasn’t alone in his assessment of the future of this offense. Anthony Armstrong, arguably the Redskins offensive breakout player this year, offered similar optimism.

"I felt good about [the offense] all season. I knew it was going to be a work in progress, but I knew we had plenty of capability and opportunities to make plays and put up a lot of points. I think we're on the right track, we have a lot to build on."

It remains to be seen just how much they can build off this year. The offense endured a line shuffle (due to injury and poor play), a dwindling stable of running backs, a lack of true playmakers and of course, a controversial quarterback change. Those aren’t exactly positives going into 2011.

That being said, the offense did find some pieces moving forward. Ryan Torain is a tough (albeit injury prone) running back who perfectly fits the Shanahans' offense scheme. The aforementioned Armstrong is a younger player who provided more than the Redskins could have even imagined before the season started. Trent Williams played like a rookie at times, but held up well throughout the season. Other youngsters such as Keiland Williams, Terrence Austin, Kory Lichtensteiger and Will Montgomery look like they can become solid contributors moving forward. 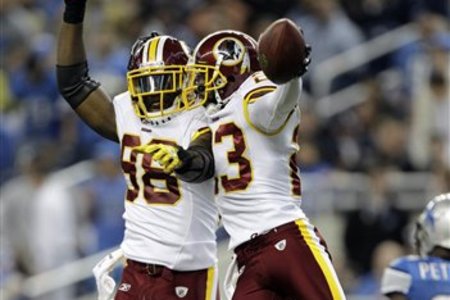 On the other side of the ball, Jim Haslett’s defense took a lot of heat for a boatload of reasons. They shouldn’t have gone to the 3-4 defense this year. They don’t have a true nose tackle. They don’t have a player opposite of rush linebacker Brian Orakpo to help add pressure. Oh, and there was that little Albert Haynesworth thing. All of those issues, and yet, the defensive players see the positives that this scheme brings.

"You can see the potential," Orakpo said. "The potential is there. Guys are flying around."

Orakpo and company had to adjust to a scheme most players on the team had never played before. But after the final game of the season, Orakpo believed the entire defense had begun to finally get it.

"I'm [now] very relaxed [in this scheme]. I know a lot of guys are more relaxed, more comfortable in this defense. I'm already looking forward to year two."

Much like his offensive counterparts, Orakpo wasn’t the only player to cite an increasing comfort level in the new scheme. Adam Carriker, the man brought in to live up to his first-round potential and help anchor the defensive line, also noted a change in mentality as the season went on.

"For the major part of the first part of the season, I was holding my gap, nobody was moving me," Carriker said. "But I think as I went along I got rid of being so gap conscience and started making plays."

Players like Carriker are the type that Mike Shanahan will have to find more of in the coming offseason. Young, hungry players who fit the schemes he is trying to install on both sides of the ball. Fans can only hope that the Redskins find the necessary pieces to help mold an effective squad that’s more than just a "bend but don’t break" style defense.

"We got this whole offseason [to improve]," Carriker said. "The second year is so much better than the first year, especially when you go from the 4-3 to the 3-4, just [getting] familiar. It's going to be that much better next year."

That last sentence is what the entire Redskins team hopes to be the case all across the board. Without any on field success at this point, all they have to go on is a basic belief in the schemes they run on each side of the ball.

You can say that the Redskins players were merely towing the company line after another disappointing season, and simply selling hope to the fans, media, and perhaps themselves. But any casual observer of the team over the latter half of the season should realize that the team did not lay down. Did it translate to wins? No. But what it did show was that they are still playing hard for their coaching staff, and still willing to give their new schemes a chance.  And most of all, they are still willing to keep the faith.

"As a team, we grew. We grew a whole lot," Armstrong said. "There's a lot to build on and there's a great foundation that's going to be here."