A few days have passed, and Washington Redskins tight end Fred Davis is still being too hard on himself. When Rex Grossman got benched in the Redskins' 20-13 loss to the Philadelphia Eagles, Davis blamed himself for two of Grossman's four interceptions. Now that Grossman has been replaced by John Beck as the team's starting quarterback, Davis is still blaming himself.

Via Rich Campbell of the Washington Times: 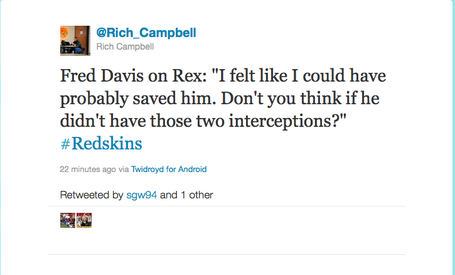 Right or wrong, Davis has got to stop looking backwards. If those interceptions don't happen, sure, maybe Grossman isn't benched on Sunday, but it was only a matter of time. We know Grossman is a turnover machine, and whether that came back to bite him in Week 6, 7, 8, 9 or later, it was going to come back to bite him.

Fred, there's nothing you can do about Mike Shanahan's decision now. Just go out there and continue to play hard and well.