Santana Moss' broken hand injury is evidently serious enough to cause the Washington Redskins' wide receiver to undergo surgery on Monday. Moss sent out the following message on his Twitter account announcing that he was about to go under the knife. 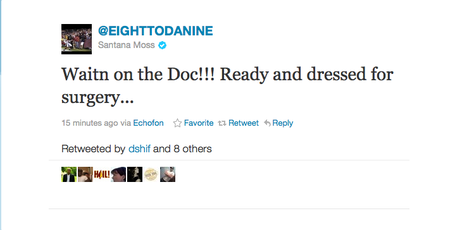 Moss suffered the injury early in the Redskins' 33-20 loss to the Carolina Panthers. After the game, coach Mike Shanahan announced that Moss had indeed broken his left hand. Neither Moss nor Shanahan announced a timetable for Moss' return, but if he is indeed having surgery, he will likely miss several weeks.

Moss has 23 receptions for 284 yards and two touchdowns in five games this season. In his absence, Jabar Gaffney, Anthony Armstrong and Terrence Austin will need to step up.