There are probably tons of NFL players who would admit privately that the NFL lockout was bad for their health, either because they didn't train as hard as they could have or because it hurt their rehab from injuries. There aren't many players who would come out and admit it publicly. As Washington Redskins fans have learned over the years, Chris Cooley isn't like most NFL players.

That's why it makes a degree of sense that Cooley was the one who came out and said what he said two days after being placed on injured reserve. 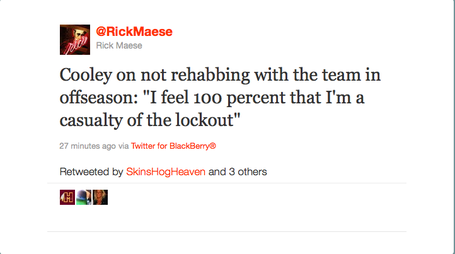 Cooley's point is that his recovery from offseason knee surgery was slowed because he couldn't communicate with Redskins team doctors. On this point, I'm somewhat sympathetic. It's true that not being able to talk to doctors makes a difference with one's rehab. Also, like we said at the top, there are tons of NFL players currently struggling with injuries that would say the same thing privately.

Then again, there are also other ways to rehab an injury besides communicating with the team. Perhaps Cooley could have avoided this situation if he was more vigilant seeking those options out.