We're so far removed from the Donovan McNabb saga in Washington D.C. that it's almost not worth bringing up again. However, the current Minnesota Vikings' quarterback had a lot to say about his time with the Redskins in a wide-ranging interview with NFL Network's Andrea Kramer. During the interview, McNabb said Mike and Kyle Shanahan's treatment of him was "disrespectful" and said he still isn't sure why he was benched.

McNabb also said he still thinks he can start in this league and added that criticism of his work ethic "pisses me off" because it comes from outside sources. Hit the jump for some key quotes:

McNabb on his work ethic: "It's total BS. Even last year, I was one of the first ones in the building and the last to leave. It's the same here. I'm upstairs after watching film and going through meetings, and I'm eating dinner with coaches. I'm going back and watching more film. For something like tht to come out is ridiculous. But people from the outside listening, they'll say, 'Oh, sources said that he's not putting in the time to be a top tier QB.' Well, just come to Minnesota, pack up your big jacket and headware, and just watch me."

McNabb on WristbandGate and criticism of his fitness: "I cannot [explain that]. That's not even something that would come out of my mouth. It's ridiculous. I mean, if you want to solidify your move of going with someone else, just say, 'Hey, he wasn't playing well, so we're going to go and rally behind someone else.' But now you start to challenge my intelligence, challenge my manhood, challenge everything that I've been able to accomplish throughout the years. That's disrespectful."

(Note: he made the following face when the fitness comment was relayed to him). 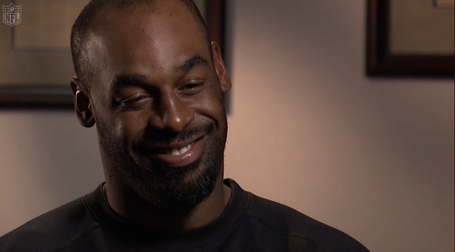 McNabb on what was "disrespectful" about his treatment in D.C., after dancing around the question: "No one needs to know on the outside what's going on in the building. None of it needs to be played out in the media. When you go to practice and you have a conversation in the morning, and all of a sudden later in the afternoon, you basically hear the whole conversation that was played out behind closed doors, that's unprofessional."