The ugliest moment in a number of game of ugly moments for the Washington Redskins against the Buffalo Bills came midway through the third quarter, when London Fletcher, LaRon Landry, DeAngelo Hall and others got into a sideline argument over blown coverage on a touchdown by Scott Chandler. Afterwards, Landry took the blame, saying the whole thing was his responsibility.

I don't know, you have to ask London about it. All I can say is that it was my fault and I'll take the blame for it," Landry said, via CSN Washington.

After the play, Fletcher was upset because he received no help on the route. He was demonstrative on the field, and the FOX cameras caught the tail end of Fletcher and Landry arguing, with Hall stepping in. Here's a shot of Fletcher on the field. 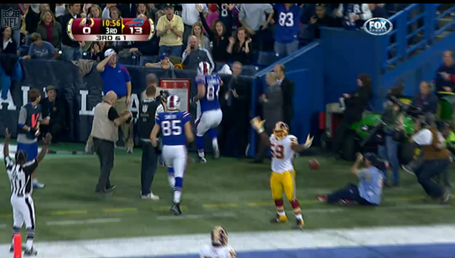