Washington Redskins quarterback Rex Grossman throws a lot of interceptions. This is not news. However, it does mean that Redskins coaches often need to sugercoat those interceptions with long-winded explanations that try to downplay blame. This caused John Keim of the Washington Examiner to make an astute point: 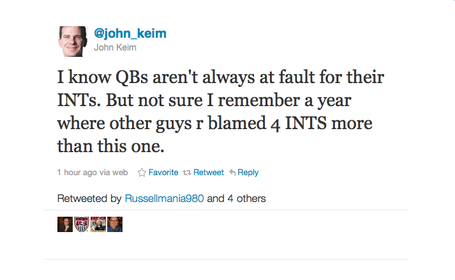 Mike Shanahan, after the Redskins' win over the Cardinals:, in which Grossman threw two picks:

"You’re going to have interceptions," Shanahan said. "You're going to make mistakes like that. The one on Anthony Armstrong, it was a perfect read. I thought the guy did a good job tugging him a little bit. He should've been wide open. We don't need to get into that. At the end of the day, you got to find a way to win. He showed poise after having a couple of interceptions early."

Later in the same week:

Shanahan said he’s not worried about Rex Grossman, who has gotten several passes batted down at the line. He attributed that to tall defensive linemen doing a good job of getting their hands up.

Shanahan after Grossman barely hung on to beat the Rams:

"Everybody can see from the statistical standpoint how a player does," Shanahan said. "Sometimes it can be a little deceiving. Just like in the last game, all of a sudden if we hit that one when we’re up 17-zip and it’s a touchdown instead of an interception, everybody’s mind-set would be different about the quarterback."

Shanahan, after Grossman's four-interception game against the Eagles.

"It’s not just one, it’s not just a game. I know a pretty good quarterback this year that threw four interceptions in a game," Shanahan said. Later he added: "Elway had some five interception days. Now, it doesn’t get any tougher than that. You just shake it off and you go forward. Those things do happen. Now, is it entirely the quarterback’s fault? Some times it is, and if it is, you have to shake it off and try to eliminate those mistakes. But those are the situations you’ll have to face."

Santana Moss, after the Eagles game:

"No question. That’s not even something that should be asked," said Moss, who, like Grossman, is represented by Drew Rosenhaus. "I think that he deserves to start. [Eagles’ QB Michael] Vick threw four picks last week, came back and had a hell of a game. Tom Brady threw four picks two weeks ago. … I feel like for the flow of the game, it worked and kind of got a spark from bringing Beck in. But I just feel like you can’t just give up on a guy because he had a bad outing."

"It happens. It’s football," Moss said. "You’re going to throw picks, you’re going to fumble balls. As a total offense together, we have to give Grossman a better chance on some of those balls. I feel like we can’t put it all on him. Yes, he threw the ball, yes it’s his decision, yes he’s going to take the blame. But as an offensive core, we’ve got to do a better job of making plays for him so he won’t have to do it all.

Shanahan, after the Miami loss:

"Rex is going to be our quarterback," Shanahan said. "When you go with a veteran quarterback, it’s pretty easy, and usually that situation stays pretty much the same. … I was impressed with the way he played [against Miami], the way he handled himself. We had only nine points, but nine points goes to a collective group. But I thought Rex played well."

Kyle Shanahan, on Thursday, talking about Grossman's interception inside the 10-yard line:

K.Shanahan on Rex's redzone INT: "That was definitely the right throw & timing of the play when he should've let it go, and the right read."

So basically, it's never his fault.